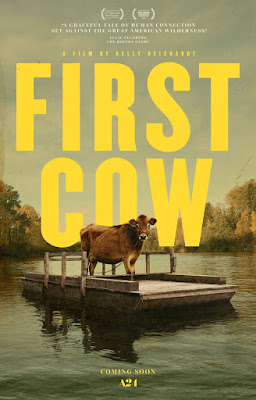 A film so quiet and low-key that it could almost qualify as ASMR, FIRST COW is the latest from minimalist auteur Kelly Reichardt, best known for character pieces like 2006's OLD JOY and 2008's WENDY AND LUCY, as well as 2011's MEEK'S CUTOFF, a covered-wagon western so authentic that one scene focused on Michelle Williams as she spends several minutes painstakingly  reloading a frontier-era rifle in real time. FIRST COW is a slow-burner even by Reichardt standards, and with a lot of scenes taking place in near-total darkness, it's the first of her movies that I've found to be a patience-tester in spots. Pacing and natural lighting hiccups aside, FIRST COW is still a good film, adapted from The Half-Life, a 2005 novel by frequent Reichardt collaborator Jon Raymond, and though they whittle the story down significantly, it still feels a bit stretched at just over two hours. A present-day prologue shows a woman (Alia Shawkat) walking her dog in the woods, where it sniffs out a partially exposed skull. The woman digs around the area and soon uncovers two human skeletons lying side by side. The setting immediately shifts to 1820 in the Oregon territory, where kind-hearted Maryland native "Cookie" Figowitz (John Magaro) is traveling with a group of surly fur trappers. He's responsible for collecting their vittles but earns their scorn and derision when the barren areas only yield scattered mushrooms and berries, along with a squirrel that got away. At a camp site, Cookie finds Chinese immigrant King-Lu (Orion Lee) hiding outside his tent in the middle of the night, fleeing a group of ruthless Russian trappers, one of whom he's accused of killing. Cookie feeds and shelters King-Lu, who takes off undetected at sunrise. After splitting from the trappers, Cookie heads to a remote trading post where he runs into King-Lu. A friendship is formed as they head nowhere in particular, though Cookie has a pipe dream of opening a hotel or a bakery in San Francisco. He talks of buttermilk biscuits, and after setting up camp, they spot a lone cow on property of a nearby estate. She's the only cow in the surrounding settlement, having lost her mate and calf in the journey overseas with British aristocrat Chief Factor (Toby Jones), who more or less runs the area by virtue of being the richest guy around.

With some egging on by King-Lu, Cookie sneaks onto Factor's property and milks the cow to create buttermilk for biscuits and scones, which become huge hits at the trading post. Even Factor is impressed ("I taste London in this cake! It's astonishing!" he exclaims), hiring Cookie to prepare some pastry for an upcoming gathering. The friendship between Cookie and King-Lu is mirrored by the bond formed between Cookie and the cow--named Evie--which is almost exposed when Factor shows her off to his guests and she affectionately nuzzles Cookie, knowing him from his covert nightly milkings. FIRST COW eventually becomes as much of a pursuit thriller as Reichardt allows once Factor discovers what's been going on and vows to kill Cookie and King-Lu, but her primary concern is the mood and the atmosphere in the film's intricately-crafted rustic production design. The pace is leisurely and the tone meditative, though there are some attempts at humor (asked about their special ingredients, King-Lu declares "Ancient Chinese secret!"), and the scenes between Cookie and Evie reveal a sensitive, respectful soul probably not cut out to be in such a dangerous environment (he even expresses sympathy to her over "the loss of your husband and your calf"). Magaro and Lee are a likable team, even if the material requires them to deliver largely internalized performances, and the supporting cast has some always-reliable character actor ringers like Jones, Ewen Bremner, Gary Farmer, and the late Rene Auberjonois in one of his last roles as a grubby old prospector (he died in December 2019). FIRST COW got some positive buzz and critical acclaim on last year's festival circuit, but like everything else from spring 2020, it was halted by the pandemic, opening in March in limited release a week before theaters began shutting down, with A24 eventually relaunching it on VOD in late July. (PG-13, 122 mins) 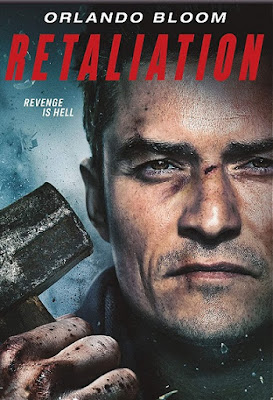 Hiding behind what appears at first glance to be a generic revenge thriller for Orlando Bloom is actually a grim and heavy day-ruiner of a British kitchen sink throwback that deals quite frankly with the PSTD effects of childhood sexual abuse. Shot in late 2015 and released everywhere else in the world as ROMANS in 2017 and into 2018, the newly-rechristened RETALIATION managed to fill a VOD void for Lionsgate and Saban Films when they needed pandemic product, likely the only reason this finally saw a US release after so long on the shelf. It's a hard sell even under ideal circumstances, but their decision to make it look like any random Redbox action movie is really doing it a disservice. It's a bit heavy-handed and lays the Biblical metaphors on a little thick at times, but Bloom is a revelation here in a harrowing performance as Malcolm, or "Malky" to his friends. Malky works on a demolition crew currently tearing down a dilapidated London church in his neighborhood--the very church he attended as young boy. Malky served two years in prison on an assault charge some years back, and considering that he's pushing 40, is referred to by everyone by his childhood nickname, and lives with his aging mum (Anne Reid of THE MOTHER) who can barely hide her disappointment in him, there are numerous indicators that his maturation has been stunted to some degree. But he holds down a job and has a casual relationship with Emma (Janet Montgomery), who works at the pub where he hangs out with his buddies after work, though he's prone to raging outbursts and shuts down whenever Emma talks about getting serious.

Malky goes off the deep end when he spots an elderly, white-haired man (James Sallie) at the pub. He instantly recognizes him as the priest who raped him when he was 12 and left the parish shortly after. As the memories come flooding back, Malky can no longer keep his issues bottled up inside. He pushes Emma away and we see his buried shame manifested in self-harming episodes, whether he stabs his hand repeatedly with scissors or violently sodomizes himself with a police truncheon in front of a full-length mirror ("I try to dig him out of me...I rape myself until I bleed," he later confesses). An expansion of ROMANS 12:20, a 2008 short film written by abuse survivor and counselor Geoff Thompson, directed by the Shammasian Brothers (Ludwig and Paul), and starring Craig Conway (DOOMSDAY) as Malky, RETALIATION is bleak and uncompromising. It takes some unexpected turns that are best left for the viewer to discover, and fans of Bloom will certainly want to give it a look, with the caveat that it's extremely downbeat and unpleasant. The only real downside is that the Shammasians and Thompson didn't need to be so on-the-nose with the symbolism, especially with the crew that employs Malky having a specialty in demolishing churches. We get it! And I really can't stress it enough--RETALIATION is not the movie the Blu-ray artwork is selling. (R, 96 mins) 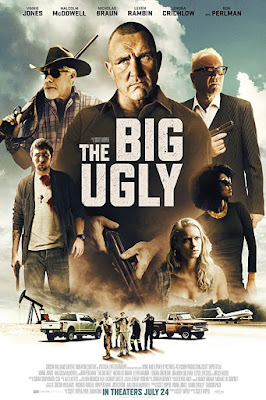 Several smaller distributors usually relegated to VOD managed to carve a niche for themselves during the initial months of the pandemic. In particular, IFC Films and Vertical Entertainment took advantage of the scarcity of product and got exposure for some unlikely titles at drive-ins and at the scattered handful of theaters that remained open over the spring and summer of 2020. One such title was Vertical's THE BIG UGLY, which opened on 68 screens in late July to become the #2 movie in the country, eventually staying in the top ten through August, which is not something one can normally say about a new film starring Vinnie Jones. The former footballer-turned-LOCK STOCK-era Guy Ritchie bloke and subsequent DTV fixture is in vintage "fookin' 'ell, mate!" mode as Neelyn, the top enforcer for London-based crime boss Harris (Malcolm McDowell). With their girlfriends in tow--Neelyn is in a committed relationship with Fiona (Lenora Crichlow), while Harris is a sugar daddy to paid escort Jackie (Elyse Levesque)--they land in the heart of Appalachia, where Harris has a large stake in the operation of West Virginia oil man Preston (Ron Perlman). Everything goes smoothly until Preston's Joffrey-esque asshole son Junior (Brandon Sklenar) hooks up with Jackie behind a bar and then tries to pick up Fiona after Neelyn goes back to the hotel to sleep it off following a brawl at the local shitkicker bar, appropriately called 86 ("Only you could get 86'd from a bar called the 86!" admonishes an outraged Harris). Neelyn wakes up in the morning and Fiona is nowhere to be found. Refusing to go back to London with Harris, he instead starts asking questions around town, finds Fiona's body floating in a lake, and confronts a smirking Junior, who has a large scratch across his forehead. Tempers flare, punches are thrown, and Neelyn ends up in jail, where Preston's loyal fixer Milt (Bruce McGill) more or less concedes that Junior is a worthless piece of shit, but he'll still be forced to intervene on his behalf if Neelyn tries to go after him. Any guesses what Neelyn decides to do anyway?

Co-produced by Jones, McDowell, and Perlman, and written and directed by Scott Wiper (who directed Jones in 2007's Stone Cold Steve Austin actioner THE CONDEMNED), THE BIG UGLY is the kind of uncomplicated B-movie that would've been banished to VOD and Redbox were we not in These Uncertain Times™. It's surprisingly engaging, considering Jones hasn't exactly been associated with high-quality titles of late. And while it's a tad overlong and it doesn't make much sense why Harris and Neelyn would've brought their girlfriends along for an overnight trip to rural West Virginia when they were heading back to London in the morning anyway, THE BIG UGLY generally works if you don't think too much about it. Much of that is due to Jones' gritty performance (imagine an older, grizzled Jason Statham) and Perlman's character having some unpredictable quirks, like ripping some local dipshits over their Confederate flag and tossing it in the trash, and adamantly refusing to engage in fracking (it isn't every day you get a liberal oil baron who's concerned about the environment). Sklenar (MIDWAY) is utterly loathsome as the thoroughly repugnant Junior, the kind of sniveling brat who thinks his dad's money is a pass to do whatever he wants, and who's such an irredeemable prick that his inevitable comeuppance is the kind of applause-worthy crowd-pleaser of a moment that we've missed in these months without going to theaters. Some minor nit-picks and contrivances aside, THE BIG UGLY is certainly above-average for this sort of thing, and as far as incongruous montage-into-closing credit needle-drops go, Exile's "Kiss You All Over" is as good a classic rock earworm as any. The film is dedicated to Jones' late wife Tanya, who died of cancer in 2019. (R, 106 mins)