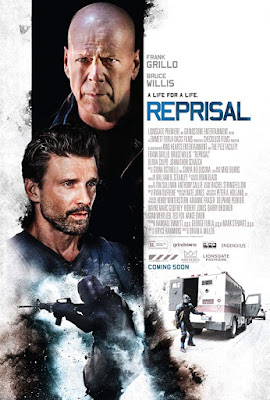 On Comedy Central's recent roast of former actor Bruce Willis, Edward Norton was on the dais and wondered if he could get away with the stuff Willis does: "Could I just leave the set of a movie after my close-ups are done and have my co-stars act opposite a C-stand with a red 'X' taped to it while a script girl reads my dialogue to them?" Perhaps Norton has seen at least a few entries in Lionsgate's landmark "Bruce Willis Phones In His Performance From His Hotel Room" series, the latest installment being REPRISAL. Reuniting Willis--at least for a day, maybe two--with his THE PRINCE and VICE director Brian A. Miller, REPRISAL also makes frequent use of the big-eared Willis double who pretty much handled his work for him in the climactic shootout of FIRST KILL. In a performance that sets new standards for doing the bare minimum, Willis again demonstrates the kind of coasting entitlement that comes when you no longer feel the need to hide your utter contempt for your co-stars, your craft, and your audience. Upon a cursory glance, he seems to be in a good amount of REPRISAL, but not when you look closer. His first appearance comes five minutes in and perfectly encapsulates this bizarre phase of Willis' career: his character is seen working out in his driveway and his neighbor jokingly calls him "old man." But it's not Willis. We see Willis' Fake Shemp with the big ears and his back to the camera, then Miller cuts to a close-up where Willis looks frazzled and confused, but the shots don't really match. He's standing in front of windows that aren't there in the long shot. It looks like Miller has been forced to sub in outtakes from another scene. Then there's a cut to the big-eared double, his back to the camera, saying "I'll take you anytime, punk!" in what is clearly the voice of someone trying--and failing--to sound like Bruce Willis. This double shows up at a few more times throughout the movie, usually when Willis' character is required to be outdoors. Were it not for this man's heroic actions in the line of duty, doing whatever was needed to make the DIE HARD icon's performance complete, the makers of REPRISAL might've been forced to resort to drastic measures, like seeing if John Cusack was available. 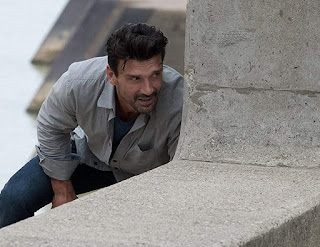 Once in a while, Willis appears in one of these things and it's not terrible. 2016's HEAT ripoff MARAUDERS was actually OK, but that was due mostly to a borderline-gonzo performance by Christopher Meloni as a pissed-off FBI agent and certainly not due to Willis putting in a few sporadic, sleepy appearances as a financial CEO organizing robberies of his own banks. REPRISAL is maybe the worst of the bunch, and it doesn't even get a good performance out of the usually reliable PURGE and WHEELMAN tough guy Frank Grillo, who just looks lethargic and bored from the start. Grillo makes a lot of movies. He knows this is a piece of shit, but he doesn't have the luxury of being Bruce Willis, so he's forced to trudge through it. Grillo stars as Jacob Tasker, the manager of a downtown Cincinnati bank that's robbed by Gabriel (Johnathon Schaech), a methodical master criminal who's called in a series of bomb threats around the city as a distraction. Put on administrative leave for a week after the robbery, Jacob has time to sit at home and stew about things--not just what he could've done differently, but also his diabetic daughter Sophia (young Natalia Sophie Butler, given a warm welcome to the biz by having her name misspelled "Natlia" in the credits) and some mounting bills that are causing some tension with wife Christina (Olivia Culpo, whose primary function here is to say things like "Any updates?" and "Talk to me!"). Jacob spends a lot of his downtime drinking Heinekens with his neighbor James (Willis), a retired cop who helps him break down the robbery as the two try to pinpoint where the next one will occur. Jacob somehow figures this out and starts tailing Gabriel himself, even following him to an armored car heist and intervening as the cops arrive. Gabriel drops the bag of money during the shootout with the cops, prompting Jacob to impulsively pull a SILENT PARTNER and take the money for himself. This doesn't quite work out, as Gabriel figures out Jacob has the money and--wait for it--kidnaps Christina and Sophia, who goes into diabetic shock right on schedule while Jacob is forced to tell James he took the money as the two face two challenges: figuring out how to rescue Christina and Sophia and doing so with as little participation from Willis as possible. 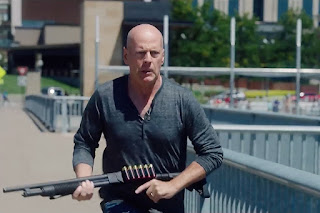 REPRISAL is neither smart nor ambitious enough to devise something as clever as the 1979 cult classic THE SILENT PARTNER, where bank teller Elliott Gould figures out that deranged mall Santa Christopher Plummer is plotting to rob his bank, giving him time to concoct a clandestine plan to skim some money off the eventual take, starting a lethal game of cat and mouse between a mild-mannered teller who got a little greedy and a lunatic psycho who wants his money. No, REPRISAL just has no energy or momentum at all, starting with an unusually dull Grillo, who's saddled with a character that just as unbelievable as he is idiotic. Schaech isn't bad as far as stock, teeth-gritting bad guys go, even if it seems like the prep for his role consisted of watching Val Kilmer's and Tom Sizemore's scenes in HEAT, which is probably more than anyone else did. And Bruce? Well, he's Bruce. He spends a good chunk of his scenes--almost all in close-up because that's pretty much all he was there for--doing this weird, slurring thing with his voice. What is he doing? Is he ad-libbing his retiree character recovering from a stroke?  It's a pointless affect that goes nowhere and serves no purpose other than Willis pretending he's "acting," but he can't even be bothered to keep up the ruse, as he starts speaking normally midway through. He does get to jog around with a shotgun near the end and blow somebody away, but it's obvious from the editing (lots of Bruce close-ups) and from the presence of the Fake Shemp that Willis and the actor he kills weren't there at the same time. There's one scene between Willis and Grillo where they have a beer in Jacob's backyard, and it seriously looks like neither actor has ever been in front of a camera before. But honestly, nothing sums up the futility of chronicling all of these Redbox-ready Lionsgate VOD dumpjobs like that first scene with Willis' double less than five minutes into the movie. I mean, seriously, look at this. This is laziness and apathy on a Steven Seagal level. Look how this scene had to be cobbled together just because Willis couldn't be bothered to stand there and stretch in a driveway. Edward Norton wasn't joking.