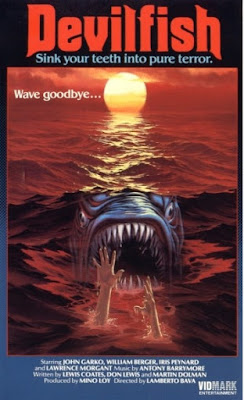 With its Key West locations and Florida setting at "Seaquarium," it's likely that DEVILFISH (aka MONSTER SHARK) was meant to be a low-rent Italian ripoff of JAWS 3-D. Showcasing one of the most amateurishly cheap-looking monsters this side Roger Corman's IT CONQUERED THE WORLD, DEVILFISH is a flat-out terrible movie and completely deserving of its MST3K skewering back in the day, but it has its undeniable charms for Eurocult aficionados. Considering how shoddy and stupid the film is, there's a surprising amount of top Italian genre talent for the time. It's directed by Lamberto Bava (under the pseudonym "John Old Jr," a shout-out to his father Mario's alias on 1963's THE WHIP AND THE BODY), after his impressive early films MACABRE (1980) and A BLADE IN THE DARK (1982) and just a year before establishing himself as a major name in Italian horror with 1985's Dario Argento-produced DEMONS (DEVILFISH apparently made it into a handful of US theaters courtesy of Cinema Shares in 1986 before its VHS release by Vidmark Entertainment). It's co-written by Eurocult stalwart and frequent Lucio Fulci collaborator Dardano Sacchetti (CITY OF THE LIVING DEAD), from a story co-conceived by Luigi Cozzi (STARCRASH) and Sergio Martino (TORSO). Bruno Mattei (STRIKE COMMANDO) was an assistant director, and the score is by Fabio Frizzi under the pseudonym "Antony Barrymore." Nobody is having their best day here, but it may be a case of too many cooks in the kitchen. It's hard to believe that Cozzi, Martino, Sacchetti, and Bava all had a hand in some of the illogical idiocy that unfolds in DEVILFISH. It's the kind of movie where people trying to find the location of a deadly creature that's part-octopus and part-prehistoric fish decide to take advantage of their downtime by going for a leisurely swim in the very area they're canvassing. It's the kind of movie where the sheriff is told that the creature can reproduce more of itself from its own severed flesh, and decides the best solution is to grab a shotgun and try to blow it into a million pieces. It's the kind of movie where a covert project to secretly develop a killer sea monster is stealthily codenamed "Sea Killer." It's the kind of movie where Bava tries to pull off some dazzling camera moves and ends up with an unexpected cameo by one of the lead actor's balls. 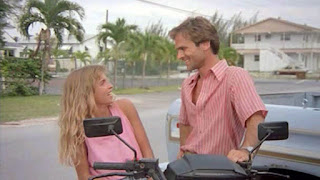 There's an unusual amount of exposition, intrigue, and soap opera histrionics, most of it just for the apparent sake of killing time and keeping the laughable creature offscreen as long as possible. A body is pulled out of the ocean with its legs bitten off, and cranky Sheriff Gordon (Gianni Garko) doesn't think it's an accident. Meanwhile, Seaquarium marine biologist Bob Hogan (Dino Conti) and dolphin trainer Stella Dickens (Valentine Monnier) get sonar readings and imagery indicating a large creature of some sort lurking in the deep waters. They get help from local electrician and equipment supplier Peter (Michael Sopkiw, who starred with Monnier in 2019: AFTER THE FALL OF NEW YORK and would reteam with Bava for BLASTFIGHTER) and outside oceanography expert Dr. Janet Bates (Darla N. Warner) and begin tracking down the aquatic monster, revealed to be man-made crossbreed of an octopus with the DNA of an extinct sea creature from the age of dinosaurs. 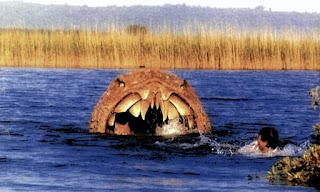 But before we get to any of that, there's Peter's flirtation with Stella, much to the chagrin of his employee and friend-with-benefits Sandra (Iris Peynado); there's a research institute where Dr. Davis Barker (one-and-done Piers Morgan lookalike Lawrence Morgant, possibly a pseudonym for an Italian or maybe a local Florida actor; either way, he's dubbed by the venerable Ted Rusoff), who's having a clandestine affair with Sonja (Dagmar Lassander), the wife of his boss Prof. Donald West (William Berger); and Florinda (Cinzia de Ponti), a disgruntled West research assistant who knows of Davis and Sonja's affair and is threatening to tell the press about illegal experiments at the lab before she's killed by Miller (Paul Branco), a local lumbering lug who's been hired by someone to silence her, resulting in one of the most ridiculous "kamikaze disrobings" (© Leonard Maltin) this side of Kelly Lynch in Michael Cimino's DESPERATE HOURS. It's also not enough that he kills her, but he also dumps the body in a full bathtub, then tosses a plugged-in hair dryer into the water. Between the chintzy special effects, the dumbass story machinations, the idiotic characters, and Morgant (with some help from Rusoff) having one of the most overwrought death scenes ever, it's easy to see the MST3K appeal. 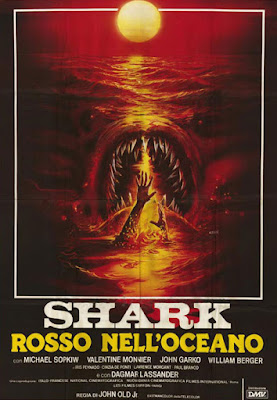 Code Red just released DEVILFISH on Blu-ray under the title MONSTER SHARK (because physical media is dead), and it looks great in its proper aspect ratio and its HD upgrade, but the commentary is yet another embarrassing shitshow typical of Code Red head Bill Olsen. Sopkiw (who left the movie business after his fourth film, 1985's MASSACRE IN DINOSAUR VALLEY) is on hand, along with DIY cult filmmaker Damon Packard, and to the surprise of no one, it's mostly useless and filled with erroneous information that shows that no research was done by either moderator prior to the recording. Sopkiw seems nice enough (nicer and more cooperative than he was with Nathaniel Thompson on the BLASTFIGHTER Blu) but he doesn't know much about movies, doesn't seem to like movies, and his memory is foggy on a lot of things, while Olsen (seen with Sopkiw in an intro before the movie and wearing his "Banana Man" costume, which he still seems to think people find amusing) almost instantly lapses into his usual schtick of mispronouncing Italian names a minute into the movie and fixating on inconsequential matters (he seems really perturbed that Sergio Martino didn't "die-rect" the movie and keeps bringing it up, despite Sopkiw repeatedly telling him that he didn't even know Martino came up with the story). Neither Olsen nor Packard have any idea who anyone in the supporting cast is. They think Iris Peynado is "Cynthia du Ponti" (Sopkiw doesn't remember Peynado's name and agrees with them), then they think Cinzia de Ponti is Dagmar Lassander. They think William Berger is Italian and his name was a pseudonym (nope--born in Austria, birth name Wilhelm Berger). Packard thinks Mario Bava directed SUSPIRIA (he does correct himself with "Oh, that was Argento," which is appreciated, but the proper thing to do after such a gaffe would be to just get up and leave). They ask Sopkiw if he dubbed himself, which he obviously didn't, then Packard seems surprised to learn that actors in multi-country co-productions were often speaking different languages on set before being revoiced in post. I'm sorry, but if you're moderating a commentary track for a specific film, there's an assumption on the part of the listener that you know something about the subject at hand. I bought the Blu-ray. I shouldn't be correcting these guys in my head as they go. Dagmar Lassander has been in a ton of Eurocult movies. They should know who she is. I realize this is only DEVILFISH we're talking about here, but can we get our shit together, fellas? Is that asking too much?  If only there was some kind of website on the Internet that served as a sort-of database of movies or maybe even an easy-to-navigate search engine that could've been consulted for research on the film you're fucking talking about...