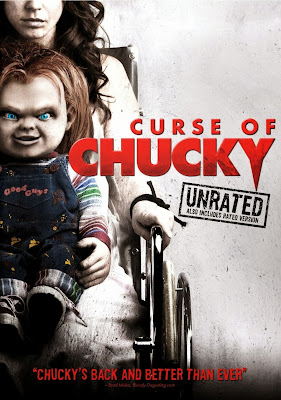 After a nine-year hiatus, Chucky is back for the sixth entry in the 25-year-old CHILD'S PLAY franchise.  For the most part, CURSE OF CHUCKY plays it surprisingly serious--as serious as a movie about a doll possessed by a serial killer can be--largely jettisoning the direction into outright comedy that writer Don Mancini took with 1998's BRIDE OF CHUCKY and as the director of 2004's SEED OF CHUCKY.  It's hard to make Chucky threatening again after showing him getting caught jerking off to an issue of Fangoria, but CURSE is a mostly straight-faced and above-average DTV outing that allows Mancini to wear his love of cult horror on his sleeve.  Filled with countless homages and winking references to things like PSYCHO, the "disabled woman in peril" and "old dark house" formulas, gialli, John Carpenter, Dario Argento, Brian De Palma, Pino Donaggio, elaborately-staged and very splattery OMEN-style murders, and one nicely-done shot that manages to include a shout-out to Carpenter's PRINCE OF DARKNESS while pulling off a De Palma split-diopter, CURSE OF CHUCKY has plenty more going on for horror fans than just the titular character's antics.


When her mother apparently commits suicide shortly after receiving the Chucky doll in an anonymous package, paraplegic Nica (Fiona Dourif, daughter of Chucky voice actor Brad) can't shake her odd feeling about the doll's strange presence.  Nica is also dealing with her high-strung, control-freak older sister Barb (Danielle Bisutti) who's pressuring her to sell their mother's house because she and her husband (Brennan Elliott) are having serious financial problems that still don't prevent them from employing a full-time au pair (Maitland McConnell) for their daughter Alice (Summer Howell).  After poisoning a family friend and local priest (A Martinez), it doesn't take long for Chucky to prowl through the house and start offing the obnoxious family members one by one before his final showdown with Nica.  Chucky is still a wisecracking smartass (after electrocuting a female character, he quips "Women...can't live with 'em.  Period"), but Mancini tones down the comedy significantly, and for much of its running time, CURSE almost functions as if BRIDE and SEED didn't happen.  It frequently references "Andy Barclay," the young character played by Alex Vincent in the first two films and by Justin Whalin in the third, and goes into some events that led to Chucky storing the soul of Charles Lee Ray (Brad Dourif, now 63, sports a hilariously terrible black wig and looks like THE ROOM's Tommy Wiseau in a couple of newly-shot flashback sequences) prior to the events of CHILD'S PLAY.  Only very late in the game does Mancini drop the ball when he starts piling on one false ending after another to make BRIDE and SEED tie in, and the final ending (well, not counting the additional post-credits ending that's only in the unrated cut) is pretty lame.  While it doesn't work all the way through, CURSE OF CHUCKY is unexpectedly solid and unpredictable for a straight-to-DVD sixth entry in an aging franchise, Fiona Dourif makes a very appealing heroine, and horror fans will really enjoy spotting the many shout-outs and references.  (R, 95 mins/Unrated, 97 mins) 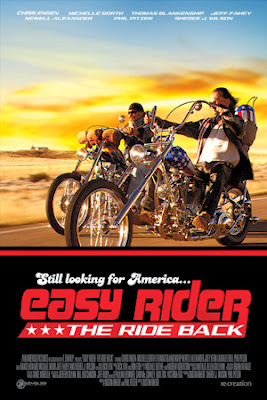 At the end of the 1969 classic EASY RIDER, when two shotgun-toting rednecks blew away bikers Wyatt (Peter Fonda) and Billy (Dennis Hopper), do you remember thinking "Great flick, but I need to know more...like the backstory of Wyatt's younger brother and their cranky dad!"?  Yeah, neither do I.  But that didn't stop Cincinnati attorney and EASY RIDER superfan Phil Pitzer from somehow clearing the legal hurdles and self-financing one of the most unwarranted sequels in the history of cinema.  Filmed in California and Ohio in 2009, the long-delayed (but not long enough) EASY RIDER: THE RIDE BACK is an amateur-night clusterfuck from the start, a total vanity project for Pitzer, who co-wrote the script and stars as Wyatt's brother Morgan.  40 years after Wyatt was killed, Morgan is summoned by his younger sister Shane (Sheree J. Wilson, who also co-produced), who tells him that their father Hickok (Newell Alexander) is near death.  Riding Wyatt's refurbished old bike, Morgan hits the road with his buddy West Coast (Jeff Fahey), traveling cross-country to Shane's to reconcile with the old man.  Through a series of confusing flashbacks, we see that Hickok, who still suffers from WWII-related PTSD and refuses to enter Shane's house until she raises a flag, was proud of the Vietnam service of his eldest son Virgil (yes, they're all named after the Earps), but resented Wyatt, who left home after the death of their mother.  Wyatt was a big influence on young Morgan, who became what Hickok deemed a "gutless hippie" when he burned his draft notice and refused to serve in Vietnam.  Virgil returned from Vietnam a changed man and disappeared, and with Morgan and the old man estranged, it's been up to Shane, who lost her son in Iraq, to take care of the irascible Hickok, who's still mad about how the 1960s destroyed his family.


Jesus, this movie is awful.  In the hands of Pitzer and director/co-writer Dustin Rikert, a veteran of many of those no-budget westerns you see in the DVD new releases at Wal-Mart, this is really just R-rated, maudlin Hallmark Channel sentimentality that tries to shamelessly cash in on the legacy of an iconic film.  Even if the film had a reason to exist, there's still no excuse for the wretched and appallingly wrong-headed execution.  The mumbling Pitzer is one of the worst actors you'll ever see, immediately taking his place beside Tommy Wiseau in THE ROOM and John De Hart in GETEVEN in delusional vanity project infamy.  Pitzer, who apparently didn't allot any of the film's budget to go toward acting lessons for himself, is so bad that he brings everyone else around him down, especially Wilson, who's not exactly Meryl Streep but the DALLAS and WALKER: TEXAS RANGER co-star has always been at least competent and professional.  A scenery-chewing Fahey is limited to little more than "Woo-hoo"'s and "Yee-haaaah!"'s as West Coast, and if your TV screen is dusty and you squint really hard, he and Pitzer almost resemble Hopper and Fonda in their endless riding scenes set to generic country-rock songs that sound like watered-down Don Henley.  Michael Nouri also turns up as Shane's asshole ex-husband, Cincinnati Reds great Johnny Bench has a bit as a baseball scout (is Pitzer his lawyer?), and Ron Howard's dad Rance plays one of Hickok's old war buddies, prompting even Clint Howard to look away in shame.  There's no sense of filmmaking ability or competence on any level.  The sound is so off that Pitzer, in what I strongly suspect will be a one-and-done venture into the movies, is often barely audible, and with no one around to stop him from going all-in on every self-indulgent whim, you get things like Morgan stopping off at a deserted ghost town while some Michael Bolton knock-off sings a piano-accompanied version of "America the Beautiful" as Pitzer's voiceover warns "We've got to start taking better care of this planet."  Whatever it was that Pitzer was attempting here, he blew it. (R, 99 mins)
Posted by Mark at 11:21 PM