On DVD/Blu-ray: THE HAUNTING IN CONNECTICUT 2: GHOSTS OF GEORGIA (2013) and ESCAPEE (2011) plus bonus Netflix Instant exclusive HOUSE OF BODIES (2013) 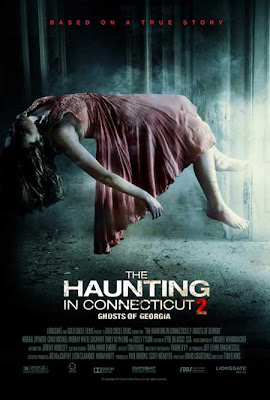 This geographically confused "sequel" to the forgettable 2009 horror hit was shot in 2010 as A HAUNTING IN GEORGIA and intended to be a sort-of similarly-themed "sister" film to the original.  But Lionsgate, taking a page out of their OPEN WATER 2: ADRIFT book, changed the title to the rather cumbersome THE HAUNTING IN CONNECTICUT 2: GHOSTS OF GEORGIA, finally giving it a limited release in early 2013.  It's an in-name-only sequel and has nothing to do with Connecticut or the events of the first film, instead focusing on an AMITYVILLE HORROR-type situation in Georgia that was profiled on an episode of UNSOLVED MYSTERIES back in the early 1990s.  The Wyrick family--dad Andy (Chad Michael Murray), mom Lisa (Abigail Spencer), and young daughter Heidi (Emily Alyn Lynd), along with Lisa's sister Joyce (Katee Sackhoff), who lives in a trailer near the main house--find out their property was a "station" on the Underground Railroad back in pre-Civil War days.  Lisa and Joyce, both of whom have psychic abilities inherited from their mother that the script introduces and doesn't really explore, realize Heidi shares that gift when she starts seeing the ghost of the previous owner along with visions of two slaves running in the fields, ancestors of kindly old blind lady Mama Kay (an underused Cicely Tyson).  The local preacher (Lance E. Nichols of TREME) comes by to bless the property, and of course all hell breaks loose with a vengeful spirit rising to haunt the family.  There's a few nicely-done bits and things get a little more icky than in the PG-13 original, particularly in a scene with Lynd vomiting a combination of sawdust, cockroaches, and maggots, and another where a character performs what can best be described as "reverse taxidermy" on herself, but the story just gets duller and more confused as it goes along.  This sincere but generally bland film is really no better or worse than its unintentional predecessor, and it's perfectly watchable for horror fans on a really slow night, but other than young Lynd, who has some really terrific facial expressions, there's nothing special here.  (R, 101 mins) 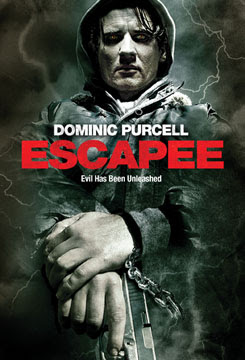 How idiotic is the stalk-and-slash thriller ESCAPEE?  At one point, two detectives observe a pair of bodies hanging from a tree and after awkwardly standing around for a few seconds, one finally says "So...these are the victims, huh?"  It actually looks like they left in the part before the director yelled "Action!" This blood-and-cliche-drenched Louisiana-shot dud was released on just a couple of screens in Alexandria and Pineville way back in 2011 (it was shot in those two cities) and has only now surfaced on DVD, seemingly forgotten by its distributor.  There's no scares, suspense, or storytelling competence in this lethargic and nonsensical film, filled with illogical detours and red herrings that serve no purpose other than to pad the running time.  Hulking killer Dominic Purcell escapes from a mental institution and makes his way to the home of a college student (Christine Evangelista) he attacked while she was on a research trip to the ward earlier in the day.  While the bodies in the neighborhood pile up, hard-nosed detective Faith Ford (the veteran TV actress also produced; her husband Campion Murphy wrote and directed) has to contend with condescending police chief David Jenson (who gets the mandatory incredulous "One guy...did all of this?!" line when surveying bodies strewn about a crime scene) and wisecracking partner Kadeem Hardison, somehow keeping a straight face while gritting her teeth and answering the question "Can you get inside his head?" with--what else?--"I'm already there."  There's a laughable twist about 20 minutes before the end (when isn't there?), but this was a washout even before that.  Maybe ESCAPEE could've gotten some mileage out of a committed lead performance, but Purcell is just a lumbering bore, which also accurately describes ESCAPEE.  (R, 97 mins) 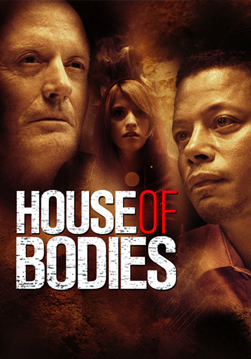 ESCAPEE is a crackerjack thriller compared to this atrocious clusterfuck. HOUSE OF BODIES debuted with zero fanfare this week on Netflix's streaming service.  It didn't play in theaters and there's currently no DVD/Blu-ray release date.  There's no trailer on any web sites and there's no user or external reviews on IMDb, which still lists the film as being in post-production.  Is this film even finished?  Was it put on Netflix streaming accidentally?   While it's not at all unusual to see terrible micro-budgeted horror films with porn-level production values, video-burned credits, and awful acting in the world of DTV and cable, it is noteworthy when one appears out of nowhere and stars three Oscar nominees.  Can anyone explain exactly what Terrence Howard, Queen Latifah, and Peter Fonda are doing in this?  And why did Queen Latifah produce it?  Is the whole thing just some elaborate tax write-off that her accountant devised?  This film is an unwatchable embarrassment even with three accomplished actors who, it should be noted, have little more than cameos and never interact with the main cast.  Has director Alex Merkin done such a great job cleaning Queen Latifah's pool over the years that she agreed to finance his movie, at the same time somehow convincing Howard to spend a day sitting in a room with Fonda?  Certainly the backstory of this steaming bucket of shit is more interesting than anything that made it to the screen.  The flimsy plot has some hot college girls running an online porn chat room in a house formerly owned by a convicted serial killer (Fonda).  When the girls are offed by a copycat, all witnessed by a hearing-impaired teenager (Harry Zittel) via webcam, irate detective Howard visits Fonda to put together a profile.  The film limps along to a yawner of a twist ending (spoiler:  Fonda took the fall for the real killer--his son--who's still on the loose), dragging so badly that even the generous amounts of nudity and splatter accomplish nothing.  Canadian singer/songwriter Alexz Johnson has a cute Young Naomi Watts thing going on as the Final Girl and she at least appears to be trying, while Fonda manages to be somewhat effective just sitting there Hannibal Lecter-style, but even by his "just pay me and I'll do it" standards, this is a humiliating gig.  Queen Latifah has two brief scenes as a chat room friend of Zittel's, probably Skyped in from her living room.  An already brief film ludicrously padded with endless insert shots of hilariously phony newspaper mastheads, HOUSE OF BODIES is an amateur-night fiasco best left unstreamed.  Don't be surprised if this vanishes from Netflix and is never seen anywhere again.  It really is that bad.  (Unrated, 78 mins, currently available only on Netflix streaming)