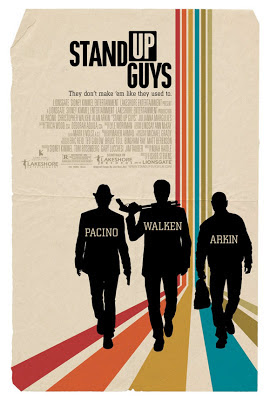 There's a famous Gene Siskel quote where the legendary film critic said that one of the criteria in his reviewing a movie was "Is this film more interesting than a documentary of the same actors having lunch?"  That's not to say that STAND UP GUYS is a bad movie, because it's not.  And in all fairness, most movies released these days aren't as interesting as the notion of sitting in on Al Pacino, Christopher Walken, and Alan Arkin kicking back and bullshitting over a meal together.  While STAND UP GUYS offers some laughs and some drama and a chance to see three living legends doing what they do, the film seems fully cognizant of its ability to just coast through 90 minutes without really making much of an effort, because with 72-year-old Pacino, 69-year-old Walken, and 78-year-old Arkin onboard for approximately 140 combined years of movie experience, 90% of the work is pretty much done.  Seeing these guys onscreen together is an absolute joy for any serious film fan.  It's too bad they weren't given much to work with other than essentially being GRUMPY OLD GOODFELLAS and Pacino walking around with a giant hard-on after scarfing down a fistful of boner pills. 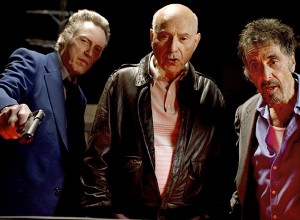 When mid-level mobster Val (Pacino) is released from prison, his best buddy Doc (Walken) is there to pick him up.  Val served 28 years, taking the fall for a botched job that resulted in the death of the son of powerful and bizarrely-nicknamed mob boss Claphands (Mark Margolis).  Claphands gives the long-retired Doc 24 hours to kill Val.  Val knows it's coming and the conflicted Doc decides to take him out for one last party.  The pair visit a brothel, break into a pharmacy to steal some Viagra, go back to the brothel, steal a car, bust their old emphysema-stricken wheelman Hirsch (Arkin) out of a nursing home, and take on the lowlifes who own the stolen car and gang-raped a young prostitute (Vanessa Ferlito).  All the while, the clock's ticking and Doc, under increasing pressure from Claphands and his goons, has until 10:00 am to whack Val and can't bring himself to do it. 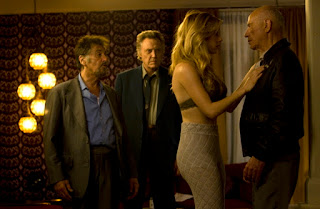 Pacino and Walken work so well together that they make it easy to overlook the deficiencies of Noah Haidle's script.  Both do their distinct "Pacino" and "Walken" routines while admirably not overdoing it.  Pacino avoids his "Hoo-aah!" histrionics and Walken is nicely subdued as the quiet Doc, who spends his days painting and watching "the cable TV" (which, like most things, is awesome when said by Christopher Walken), and visiting an all-night restaurant where he's befriended a sweet graveyard-shift server (Addison Timlin).  Walken is given the film's most interesting character and underplays it quite well, looking appropriately weathered and worn-down after a long life nickel-and-diming it as a blue-collar working stiff gangster (these guys were probably friends of Eddie Coyle).  STAND UP GUYS focuses primarily on the relationship between Val and Doc, and Arkin really gets shortchanged in what basically amounts to an extended cameo.  His Hirsch doesn't even turn up until halfway through and even then, he doesn't really prominently figure in before a highly implausible departure that doesn't make a whole lot of sense (Julianna Margulies has a couple of scenes as Hirsch's daughter, and she's given even less to do). 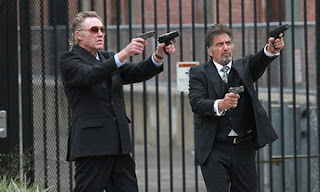 STAND UP GUYS, which expanded this week after opening on one screen in New York and Los Angeles for a week in December 2012 to qualify for the Oscars (that was hardly a necessary maneuver, Lionsgate), has a lot of quiet and introspective moments that really work but just as many silly elements that don't, and as a result, it struggles to find a consistent tone.  Arkin is a national treasure, but even he can't sell the idea of his character hooked to an oxygen tank gasping for breath in one scene, and leading the cops on a wild chase in the next before going to a brothel and fulfilling his lifelong dream of "two women at the same time."  Old guys doing young guy things can be funny, like Kirk Douglas in a Red Hot Chili Peppers mosh pit in 1986's somewhat similar TOUGH GUYS, but STAND UP GUYS too often panders to the lowest common denominator by going for the cheap "geezers being vulgar" laughs, and a dazed Pacino pitching a tent in his pants is about on the level of Burgess Meredith talking about "taking the skin boat to Tuna Town!" in GRUMPY OLD MEN.  But with these guys working together, Haidle and director Fisher Stevens clearly realize that most of their work is done for them.  It's really hard to dislike the admittedly slight and forgettable STAND UP GUYS, but one still wishes it exerted itself just a little and gave these still-vital gentlemen something a little more substantive. 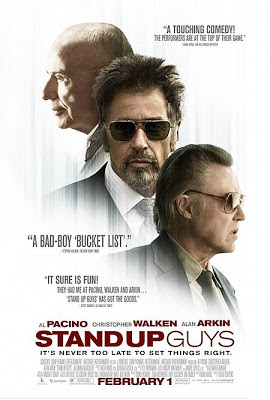