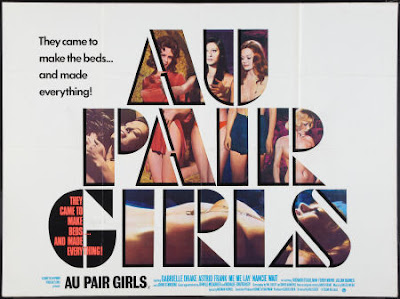 Netflix recently added a truckload of Kino/Redemption titles to their streaming service, including several offerings from the extremely prolific British sex comedy subgenre of the 1970s.  Often playing like THE BENNY HILL SHOW with tons of nudity and smarmy double entendres and centered on people in everyday jobs stumbling and bumbling into a series of slapstick sexual misadventures, these films, like the penis-transplant classic PERCY (1971), AU PAIR GIRLS (1972), and the whole CONFESSIONS OF... series starring Robin Askwith (1974's CONFESSIONS OF A WINDOW CLEANER, 1976's CONFESSIONS OF A DRIVING INSTRUCTOR, etc), which spawned its own imitations with 1975's THE UPS AND DOWNS OF A HANDYMAN and the Barry Evans-starring ADVENTURES OF... series (1976's ADVENTURES OF A TAXI DRIVER, 1977's ADVENTURES OF A PRIVATE EYE, and 1978's ADVENTURES OF A PLUMBER'S MATE), were hugely popular with audiences (CONFESSIONS OF A WINDOW CLEANER was a cultural phenomenon at home, becoming the highest-grossing film of 1974 in the UK), loathed by critics, and were staples in US grindhouses and drive-ins.  Even the long-running CARRY ON film series, dating back to 1958, started to change with the times and up the raunch factor in films like CARRY ON GIRLS (1973), CARRY ON DICK (1974), and CARRY ON EMMANNUELLE (1978).  Many of these comedies are now forgotten by everyone except cult movie enthusiasts and most of them are rather tame by today's standards, but even in the '80s, they were raunchy enough to be in regular rotation on late-night cable in the '80s, usually on Showtime's awesome "After Hours." 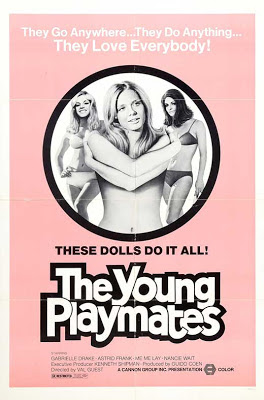 One of the best-known titles in the British sex comedy explosion of the 1970s, AU PAIR GIRLS, directed by veteran journeyman Val Guest, plays a lot like a British version of a Roger Corman/New World "Nurses" film of the same period.  Four sexy young ladies arrive in England as au pairs (actually, there's a fifth, but she disappears after the opening scene--was she cut from the film?): Swedish Anita (Astrid Frank), Danish Randi (Gabrielle Drake, German Christa (Nancie Wait), and Chinese Nan Lee (Me Me Lay), leading to a series of mostly wacky and occasionally dramatic misadventures over the course of the night and into the next morning.  Anita enchants the wealthy, lecherous Sheik El Abib (Ferdy Mayne), Randi spends the night in a barn with amiable doofus Stephen (Richard O'Sullivan) after his car gets a flat, the virginal Christa meets rock god Ricky Strange (Steve Patterson), and Nan makes a man of childlike, possibly autistic piano prodigy Rupert (Julian Barnes).  Lots of hijinks and smutty, winking one-liners (Randi: "I'm Randi!"  Stephen: "You're not the only one!"), every male is a leering horndog, and the women disrobe at every opportunity.  In short, AU PAIR GIRLS delivers exactly what it promises, but in another similarity to the New World productions, it occasionally drifts into unexpected directions, such as the surprising sympathy demonstrated by Strange's sleazy manager Buster (John Standing) when he finds out Christa was a virgin and realizes how upset she is about feeling used by Strange and even by Buster himself when he allowed himself a drunken turn with her as well, but the film sort of sidesteps the issue that Buster essentially rapes her.


Also with Geoffrey Bayldon, John Le Mesurier, Johnny Briggs, Rosalie Crutchley, and Milton Reid, cast radically against type as a silent, hulking manservant.  Me Me Lay co-starred in Umberto Lenzi's cannibal film MAN FROM DEEP RIVER the same year and would go on to be a fixture in the Italian cannibal subgenre.  O'Sullivan became a huge TV icon in the UK, starring for six seasons on the popular MAN ABOUT THE HOUSE, which was remade for US TV as THREE'S COMPANY, with O'Sullivan's Robin Tripp becoming John Ritter's Jack Tripper.  Guest (1911-2006), best known for helming the British sci-fi classics THE QUATERMASS XPERIMENT (1955) and QUATERMASS 2 (1957) and some of the 1967 Bond spoof CASINO ROYALE, saw his career get a second wind from these sex comedies and went on to direct CONFESSIONS OF A WINDOW CLEANER.  AU PAIR GIRLS was released as THE YOUNG PLAYMATES in the US by the early, pre-Golan & Globus incarnation of Cannon.   If you find the interminable opening theme song catchy, fear not...you'll only hear it 72 more times over the course of the film. (Unrated, 84 mins)

Several years before finding his niche in Eurocult films by the legendary likes of Lucio Fulci and Antonio Margheriti, a shaggy-haired David Warbeck starred in this racy British comedy that originally received an X rating in the US for its vigorously explicit sex scenes.  Warbeck is second-rate paperback mystery writer Grant Henry, who supplements his income by working as a cat burglar, stealing and fencing expensive jewels and seducing the horny wives he finds sleeping alone while their husbands are away on business.  His actions leave Scotland Yard's Inspector Smith (Terence Edmond) frustrated because, while all of the recent burglaries are obviously committed by the same person, the women all give wildly varied and increasingly ridiculous descriptions of the burglar ("he's everything from a club-footed midget to a six-foot-six Russian with a hare-lip!") and all inexplicably wait several hours before calling the police.  Smith and his dim-witted partner Sgt. Plinth (co-writer Michael Armstrong, who also directed MARK OF THE DEVIL) team with accident-prone photographer Guy (Christopher Neil) and sexy, karate-expert insurance investigator Judy (Diane Keen) to set up a sting to nail the Sex Thief.

Armstrong and co-writer Tudor Gates (BARBARELLA, DANGER: DIABOLIK, THE VAMPIRE LOVERS) both hide behind the single screenwriting pseudonym "Edward Hyde" and Gates produced under the name "Teddy White."  THE SEX THIEF marked the directorial debut of Martin Campbell, who went on to direct two 007 films (1995's GOLDENEYE, and 2006's CASINO ROYALE) in addition to big Hollywood movies like THE MASK OF ZORRO (1998), VERTICAL LIMIT (2000), and, most recently, GREEN LANTERN (2011).  The film is moderately amusing, and the early scenes have some big laughs, particularly at Smith's exasperation at the ludicrous descriptions the victims give and his failure to understand how one wants the newspaper to print that the burglar didn't get all of her jewelry in the hope that he'll return and seduce her again, but it's a fairly predictable mix of slapstick antics and graphic sex, with one sped-up sequence an obvious riff on A CLOCKWORK ORANGE.  The sex scenes leave little to the imagination and are absurdly overdone, and Campbell probably could've trimmed some of them, as one has the camera lingering on a huge pimple on Warbeck's ass.  In its original form, THE SEX THIEF was released in the US in 1974 by International Amusements, then retro-fitted with body doubles in newly-shot hardcore inserts, re-edited without the involvement of any of the filmmakers or cast, and dumped on the porno circuit in 1976 as HER FAMILY JEWELS. (R, 93 mins) 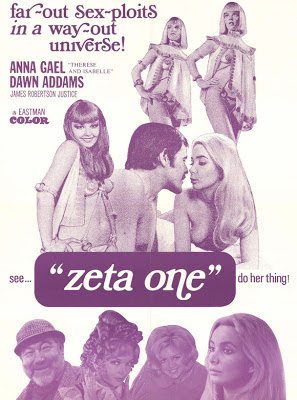 It's hard to imagine a 007 spoof about a race of topless alien women being dull, but ZETA ONE is an utter disaster from start to finish.  Exhibiting a laundry list of red-flag indicators of a difficult production (obvious padding of the running time, a clumsy flashback structure valiantly attempting to explain the plot, the biggest-name actor completely disappearing from the film without explanation, and IMDb shows it's the director's first and last feature film), ZETA ONE begins with a laborious 20-minute prologue that turns out to be a wraparound segment.  Suave secret agent James Word (charisma-vacuum Robin Hawdon) returns from his latest mission to find Ann (LUST FOR A VAMPIRE stunner Yutte Stensgaard), his boss W's secretary, in his mod bachelor pad.  They play a drawn-out game of strip poker that finally leads to Word giving her the lowdown on what happened (it's interesting that Word arrives home with a fake mustache coming unglued and he removes it when Ann points it out to him--why would he wait until he got home to remove it?  Because Hawdon has a mustache in what became the flashback footage and didn't have one when he was called back for the presumably hastily-arranged reshoots).  Word got involved in an incomprehensible plot involving a clash that pits topless alien women of the planet Angvia (really?), led by Zeta (Dawn Addams, who remains clothed because she's a respectable actress), against the megalomaniacal Major Bourdon, played by an embarrassed and hopefully drunk James Robertson Justice, clearly reading cue cards like a disinterested SNL host in one of his last films before a series of strokes forced him to retire from acting.


ZETA ONE makes up in gratuitous nudity what it lacks in laughs and any sense of coherence or pacing, but even that's not enough to make this boring "comedy" worth the suffering.  Hawdon is pathetic and Addams soldiers through with a stiff upper lip but looks like she'd rather be anywhere else.  But beloved British character actor Justice doesn't even hide his contempt for the entire project, and one can hardly blame him.  Chances are he didn't even stick around, because his character vanishes from the film shortly before the climax and is never referenced again.  Director Michael Cort's IMDb page shows this and a 1972 short subject, and absolutely nothing else.  The Hawdon-Stensgaard wraparound sequences were clearly added to clarify the plot (they don't) and add some T&A (well, OK, fine), but these scenes provide about 25 minutes of superfluous padding, which means Cort initially had about an hour of useable footage.  There's probably an interesting story to be told about this obvious train wreck of a production (difficult star?  First-time director in over his head?  Unfinished script?), but anyone involved who's still with us has likely long since blocked it from their memory. The mod, swingin' '60s atmosphere of ZETA ONE had to look hopelessly dated by the time this was belatedly released in the US in 1975 as THE LOVE FACTOR (right around the time Justice died).  It later turned up on US home video in the '80s from Prism Entertainment as ALIEN WOMEN.  It's unwatchable under any title.  (R, 86 mins) 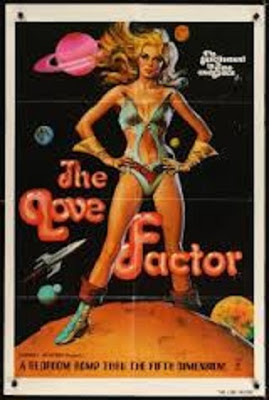 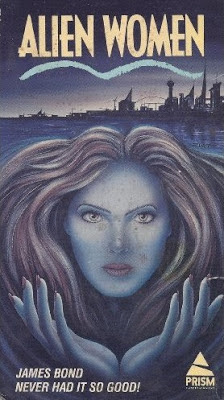