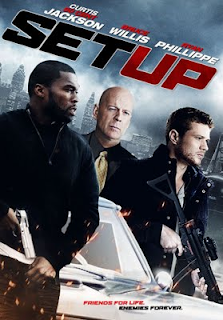 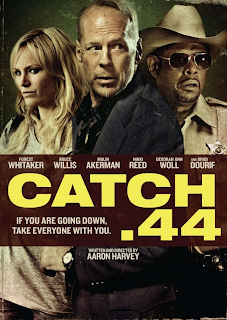 These reviews were originally published in slightly different form at the Mobius Home Video forum in October 2011 (SET UP) and December 2011 (CATCH .44)


As we've seen with Steven Seagal, when you make enough crappy DTV action outings, you might occasionally have the accidental one that, while not very good under most standards, really isn't all that bad, relatively speaking. Such is the case with SET UP, the latest Detroit-shot Curtis "50 Cent" Jackson vehicle, which benefits from what appears to be a larger-than-normal budget for such fare, better-than-usual direction (by veteran stunt coordinator Mike Gunther), some occasionally snappy dialogue (50 Cent didn't write the script, but was one of 16-18 credited producers), and some unexpected casting for this type of DTV time-killer.

Owing a large debt to botched heist and revenge flicks such as POINT BLANK, PAYBACK, THE TOWN and CITY OF INDUSTRY, to name just four, SET UP has (wait for it) a botched diamond heist, which goes down the toilet when Sonny (50 Cent) and Dave (Brett Granstaff) are shot and left for dead by their partner Vincent (Ryan Phillippe). Dave dies, but Sonny survives, and has the bullet removed by a tattoo artist buddy in one of the film's more ridiculous moments. Sonny forms an unholy alliance with unironically-named mob boss Mr. Biggs (Bruce Willis...yes, THAT Bruce Willis), and engineers a convoluted revenge plot to take down Vincent, who's in with some mob cohorts of Biggs in a deal that has something to do with buying prison protection for Vincent's incarcerated father (James Remar). Double crosses, gunplay, and F-bombs ensue.

While not some under-the-radar gem--and maybe call it very diminished expectations--this was a lot more watchable than I was anticipating. A lot of that is due to some overqualified co-stars, including the surprise participation of second-billed Willis, in what would seem to be the "Richard Harris-in-STRIKE COMMANDO 2" of his IMDb page. It's not an in-and-out-in-a-day deal, either. Willis has quite a bit of screen time and actually seems invested in his performance. There's been some online speculation of why he's slumming in a DTV 50 Cent flick, but further investigation shows that Gunther, in addition to a long resume of stunt work, directed a behind-the-scenes doc on LIVE FREE OR DIE HARD, and I would assume befriended Willis, who more than likely did SET UP as a favor to the relatively new director with only one other DTV feature under his belt. But even without Willis, it's far and away the best, if only by default, of Fiddy's long line of instantly-forgotten DTV drivel. Apparently, 50 and Willis got along, because they've done another movie together--something called FIRE WITH FIRE that has a 2012 release date. Fiddy and B-Wil teaming up has its downside: trouble in paradise for Fiddy and the absent Val Kilmer? Has the sun set on their seemingly eternal Bad Movie Bromance?

I'm not saying anyone needs to make any effort to see it, and it still has some clunky, Basil Exposition dialogue (50 Cent: "That wasn't just another guy that got clipped! It was my longtime friend Dave Hall!"), and really, it's average in every way. But grading on the 50 Cent curve, it's more than acceptable, and Willis completists will certainly enjoy his at-times quite amusing performance. He's clearly way more into this than he was during any scene in COP OUT.


50 Cent, Cassian Elwes, and former NuImage associates Randall Emmett and George Furla were among the expected truckload of producers bankrolling this appallingly bad Tarantino ripoff that, except for some predictably terrible-looking CGI splatter and an unfunny BROKEBACK MOUNTAIN reference, feels like it was frozen in 1996 and just now thawed out. Written and directed by Aaron Harvey, director of the universally-panned THE EVIL WOODS, CATCH .44 got a contractually-obligated "select theaters" release a week before turning up on DVD, but make no mistake: this is every bad thing your moviegoing mind can conjure up when you hear "straight to DVD." It's a complete embarrassment for all concerned.

In a podunk Louisiana town, three sisters, Tes (Malin Akerman), Kara (Nikki Reed), and Dawn (Deborah Ann Woll) work for repulsively sleazy, pecan-snacking drug kingpin Mel (Bruce Willis). Mel has them intercepting a coke buy being orchestrated by someone trying to horn in on Mel's turf. Nobody knows who this mystery person is, but Kara seems to think Mel is setting them up to be rubbed out for a job they recently botched. Meanwhile, psycho hitman Ronny (Forest Whitaker) arrives in town, dressed in the uniform of a deputy sheriff he just killed, and is on his way to the very diner where the sisters are waiting to intercept the buy.

Let's count the ways this relentlessly talky fiasco cribs from Tarantino: it opens in a diner (PULP FICTION) as the sisters talk about sex and how men and women relate (DEATH PROOF), then they pull out their guns and hold the diners hostage (PULP FICTION). Willis, with a bad soul patch and track marks on his neck, looking like a meth lab Billy Bob Thornton, is introduced giving a very similar speech to the one he got from Ving Rhames in PULP FICTION, and one pivotal moment involves a restaging of the RESERVOIR DOGS standoff. There's also a bunch of (among others) old '50s/'60s rock tunes on the soundtrack with twangy rockabilly riffs, and for the ultimate reference, the girls rock out in their car to a cassette tape of...wait for it...Bruce Willis' 1987 album The Return of Bruno.  Yeah...the one with "Respect Yourself."

And speaking of Willis, is he having some financial problems? Why is he suddenly becoming Val Kilmer? Willis actually seemed to be trying in SET UP, but he's totally phoning this one in. While he was in most of SET UP, here he seems to have only been on the set for a couple of days, and Harvey probably let him riff and improv and do whatever he wanted (he's shown wearing nothing but a silk robe and a thong at one point). I'm not sure what's going on with Willis right now, but three DTV flicks in quick succession (including the soon-to-be-released FIRE WITH FIRE), all involving 50 Cent, is a little alarming.  Wasn't RED one of his biggest hits?  That was out in theaters a year ago, folks.  It's not like Willis has gone years without a blockbuster. 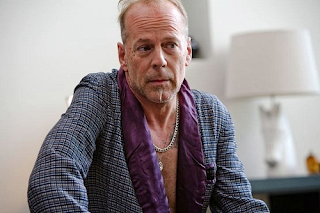 But all of these issues are secondary once we address the elephant in the room: Forest Whitaker's performance here is one of the worst, most self-indulgent turns by a normally solid actor that I've seen in years. He seemed to be on a slippery slope with his overacting on the failed TV series CRIMINAL MINDS: SUSPECT BEHAVIOR, but that's nothing compared to the crimes against the craft of acting he commits here. He's so bad in this that it's actually uncomfortable to watch. You're embarrassed for him. Switching accents throughout for apparently no reason other than boredom, Whitaker spends the second half of the film doing a pitiful SCARFACE/Tony Montana impression that's humiliating enough that SAG would have a case if they opted to suspend his membership. Whitaker is incredibly bad in this film, and clearly, Harvey was so happy to have guys like Willis and Whitaker in his movie that he never once made any attempt to rein in either of them.

CATCH .44 is an absolute dumpster fire of a film that should be avoided by anyone who has an otherwise positive opinion of Forest Whitaker. And Willis? Maybe that planned sequel A GOOD DAY TO DIE HARD isn't looking so bad after all.
Posted by Mark at 9:16 PM