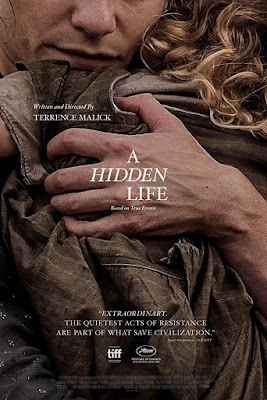 Considering the 20-year sabbatical he took between 1978's DAYS OF HEAVEN and 1998's THE THIN RED LINE, Terrence Malick has been surprisingly prolific since his return, especially in the last decade: his latest film, A HIDDEN LIFE, is his fifth feature since 2011. But it's been an increasingly divisive decade for Malick fans, and even his most devout apologists started turning on him after 2017's atrocious SONG TO SONG, where the filmmaker's embrace of rambling, ethereal voiceover and growing disdain for any semblance of narrative storytelling or forward momentum reached their absolute nadir. Perhaps even Malick felt he'd disappeared a little too far up his own ass with SONG TO SONG, as A HIDDEN LIFE marks a return to actual scripted narrative and conventional storytelling, displaying a side of Malick we haven't seen since 2005's THE NEW WORLD and parts of 2011's THE TREE OF LIFE. That doesn't mean he's completely changed his ways. He's still as meticulous and obsessive as ever: A HIDDEN LIFE, originally titled RADEGUND, was shot back in 2016 as Malick spent nearly three years tinkering with it and tweaking it in the editing room, during which time two of its cast members died (Michael Nyqvist in June 2017 and Bruno Ganz in February 2019). Set from 1939 to 1943, the film is based on the true story of Franz Jagerstatter (August Diehl), a farmer in Radegund, Austria. He's a good, honest man who's happy with his simple life, tending to his fields, doing handyman work at the local church, and spending time with his wife Fani (Valerie Pachner) and their three daughters. But Austria is in a time of turmoil. War is ramping up throughout Europe and able-bodied men are being drafted to serve under Hitler. Much of the Radegund locals--including its Hitler-loving mayor (Karl Markovics) pledge blind allegiance, while Franz, troubled by the Nazi ideology, dutifully goes to church for guidance but gets nothing from the Bishop (Nyqvist), all the while defiantly trying to remain in apolitical detachment.

He's conscripted and goes through the military training, and is then sent home until he's called to serve. That day comes, and he refuses the required oath of allegiance to Hitler. Franz going on the record as a conscientious objector quickly gets around Radegund, as former friends ostracize the Jagerstatters, and no one, not even Radegund priest Father Furthauer (Tobias Moretti) can convince him to simply go along to get along. Franz is eventually hauled away to prison to await trial, where he's regularly beaten and tortured, even refusing a request by a Nazi captain (Matthias Schoenaerts), who promises to dismiss the charges, end his incarceration, and give him a non-battlefield office job if he simply signs the oath to Hitler. Franz Jagerstatter never backed down and never gave in, and would eventually be found guilty before a tribunal and executed on August 9, 1943. As one expects, A HIDDEN LIFE is stunningly beautiful, especially the scenes around the Jagerstatter farm, shot in the mountains of northern Italy. This probably looked great on a big screen, but the film got lost in the shuffle of Disney taking over 20th Century Fox, and something that would've gotten a certain Oscar push in any other year ended up stalling on 151 screens at its widest release, grossing under $2 million. It's nice to see Malick meeting a weary audience halfway by embracing relatively standard storytelling again while still giving himself room to indulge his usual tropes and obsessions (slow walks through fields, long, contemplative, philosophical voiceovers, this time as epistolary narration in letters between Franz and Fani). But at a career-long 174 minutes, it's simply too long, especially when he keeps the bigger picture at a distance to get into the heads of Franz and Fani, and you can almost see Diehl desperately wanting to break out with an Oscar-caliber performance but Malick's methodology keeps him pinned down. He does what he can when it's allowed, and Ganz has a great moment later on as the head of the tribunal, his sad face speaking volumes after he privately tries to get Franz to just sign the oath and be done with it, maybe even silently admiring the young man's conviction even though he has no choice but to sentence him to death. After years of increasingly self-indulgent drivel, A HIDDEN LIFE is a step in the right direction for Malick, whose next film, the Biblical drama THE LAST PLANET (starring Schoenaerts) is currently in post-production, which means we'll see it sometime in 2023. (PG-13, 174 mins) 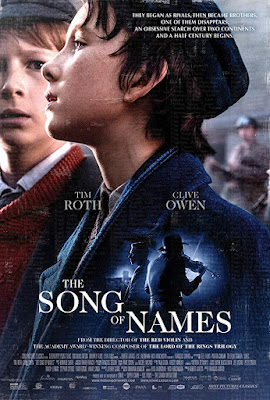 Another barely-released prestige project that came and went with little fanfare during the 2019 awards season (Sony got it on 182 screens at its widest release), THE SONG OF NAMES is an earnest but empty period drama that jumps back and forth between 1939. 1951, and 1986. In London in 1951, 21-year-old Polish-born violin prodigy Dovidl Rapoport (Jonah Hauer-King) is set to make his much-anticipated debut performance before a sellout crowd that will be broadcast on BBC radio, but he never shows up, and neither his manager Gilbert Simmonds (Stanley Townsend), his son, Dovidl's best friend Martin (Gerran Howell), nor Martin's girlfriend Helen (Marina Hambro), know where he is. We learn that Dovidl has lived with the Simmonds family since 1939, when his Jewish father left him in the care of impresario Gilbert to let him study the violin and be safe as Hitler's Germany began its conquering rise to power. Young Martin (Misha Handley) is resentful of Dovidl (Luke Doyle), whose pre-teen arrogance, self-proclaimed musical genius, and the attention he gets from Gilbert is initially a source of conflict, though the two boys eventually form a bond and become the best of friends. In 1986, Martin (Tim Roth) is a classical music talent scout in London, and while judging an otherwise routine talent show at an area school, he sees a student using a very particular and unique way of applying rosin to the bow that is identical to what he watched Dovidl do countless times when they were children. Only then does he realize how Dovidl's disappearance has quietly gnawed at him for 35 years, and he switches to amateur sleuth mode--going from London to Warsaw to NYC--to find out what happened to him.

Second-billed Clive Owen's name is above the title with Roth's, so it's not really a spoiler to say that 1986 Dovidl will eventually appear much later, but the first hour and change is spent on Martin chasing a series of coincidental leads that get increasingly more contrived with each new clue. Based on a 2002 novel by Norman Lebrecht and scripted by Jeffrey Caine (a 2005 Adapted Screenplay Oscar-nominee for THE CONSTANT GARDENER), THE SONG OF NAMES telegraphs too many of its reveals so that nothing that happens is particularly surprising, especially in the way 1986 Helen (Catherine McCormack), Martin's wife of over 30 years, really doesn't want him to waste his time tracking down Dovidl. 1951 Dovidl grows more and more concerned over the fate of his family, from whom he hasn't heard in years, fearful that they were among the dead at Treblinka, and it's in these scenes that director Francois Girard (THIRTY TWO SHORT FILMS ABOUT GLENN GOULD, THE RED VIOLIN) fares best, with a devastating sequence that's diminished somewhat by the ludicrous way Dovidl gets to where he goes to discover the truth. The same incredulity applies to 1986 Martin just walking into a small violin repair shop in Brooklyn, where the owner (Saul Rubinek) just happens to still have the address of an anonymous caller who never gave his name but inquired about selling a particular violin four years earlier. That scene with 1951 Dovidl's discovery--and the origin of the film's title--is an emotional wrecking ball, but THE SONG OF NAMES trudges on for another half hour before its big soap opera reveal that isn't even a surprise by that point. The younger actors do a lot of the dramatic heavy lifting, as Roth essentially just plays detective and listens to people talk about Dovidl, while Owen really isn't onscreen long enough to make much of an impression. (PG-13, 113 mins)