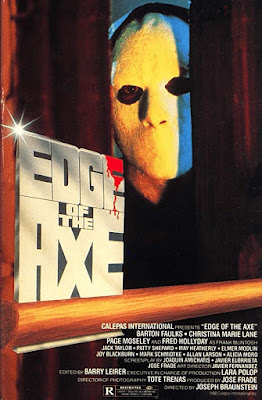 In recent years, there's been a resurgence of interest in the work of Spanish exploitation auteur Jose Larraz (1929-2013), perhaps best known for his 1974 British-made cult classic VAMPYRES, which really took the "lesbian vampire" subgenre--ushered in with Hammer's THE VAMPIRE LOVERS in 1970--just about as far as it could go. 1974 also saw Larraz helming his most serious film, the Roman Polanski-esque psychological thriller SYMPTOMS, which was actually nominated for the Palme d'Or at Cannes before falling into obscurity for decades until Mondo Macabro released it on Blu-ray a few years ago. Despite the Cannes accolades, Larraz went right back to his exploitation roots with films like 1977's THE COMING OF SIN (included on a 2019 Larraz box set from Arrow Video, along with VAMPYRES and his 1970 debut WHIRLPOOL), 1979's AND GIVE US OUR DAILY SEX (with Laura Gemser), and 1982's sleazy BLACK CANDLES. A pair of late '80s Larraz slasher films recently resurfaced for the first time since the VHS era courtesy of Arrow, because physical media is dead: 1988's EDGE OF THE AXE, and 1990's DEADLY MANOR, with another Larraz title from the same period, 1987's REST IN PIECES, rumored to be coming from Vinegar Syndrome later this year. Parts of AXE and all of MANOR were shot in the US, with Larraz putting forth a lot of effort to make them look as much like American slasher films of the era (albeit a few years after the craze had passed) as he could, right down to hiding behind his Americanized pseudonym "Joseph Braunstein" on EDGE OF THE AXE. 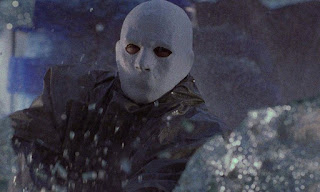 Released straight-to-video in the US by the short-lived Forum Home Video, EDGE OF THE AXE was partially shot in Big Bear, and it really busts its ass to fool you into thinking it's an American production, with Larraz including an abundance of second-unit work that turns a good chunk of the film's opening half hour into an unintentional travelogue. Starting with a strange but striking sequence in an automatic car wash, a white-masked, axe-wielding serial killer is amassing a body count in the fictional Paddock County, with Sheriff McIntosh (American TV actor Fred Holliday) determined to dodge any kind of responsibility for dealing with it (one victim is found partially decomposed, bloodied and hanging upside down in the basement of a bar, and he tells the coroner to write it up as a suicide). There's no shortage of suspects: SANTA BARBARA's Page Moseley as the local exterminator Richard Simmons (!), who makes no secret that he only married his older wife Laura (Patty Shepard) for her money, and is openly trying to hook up with Susan Nebbs (Joy Blackburn), the hottie daughter of wealthy Mr. Nebbs (Conrado San Martin); Nebbs' other daughter Lillian (Christina Marie Lane), who's back from college; Rev. Clinton (Elmer Modlin), who keeps pestering Lillian about choir practice; weirdo church organist Christopher Caplin (Jack Taylor); and drifter Gerald Martin (Barton Faulks), a computer whiz and old friend of Richard's who's just arrived in town and starts dating Lillian. Also a suspect: the entire remaining male population of Paddock County once floozy hairdresser and part-time prostitute Rita (Alicia Moro) is murdered, leaving behind a black book with the name of every married guy in town who paid for her services. That doesn't include Sheriff McIntosh who, at the crime scene as Rita's mutilated corpse is being carted off on a stretcher, openly laments to the coroner (who describes the condition of the body as "hamburger meat") and a visiting big-city detective who looks and acts like a drunk Civil War re-enactor that he never got the chance to screw her. 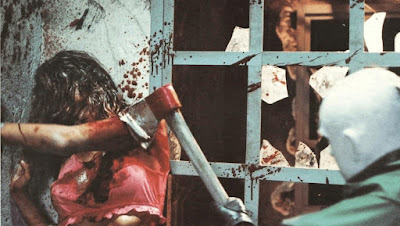 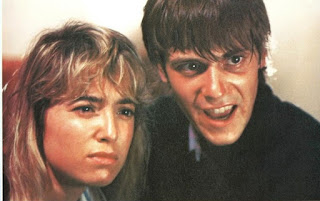 Yes, EDGE OF THE AXE is that kind of movie--not quite PIECES but certainly in the ballpark. As the murders continue, Lillian is convinced that the killer is her unseen cousin Charlie, who was recently released from a mental hospital. She's also a fellow techie, and together with Gerald, they do some amateur detective work on a computer whose capabilities demonstrate that the filmmakers really don't know how computers work, the level of realism falling somewhere between a CBS police procedural and NIGHTMARE WEEKEND. The comparisons to PIECES also extend to Holliday's McIntosh being the most useless cop in a pretend-American Spanish slasher movie since Christopher George delegated his entire caseload to "that kid Kendall" in pursuit of the chainsaw killer, plus there's an almost equally hilarious Agatha Christie-type moment where Larraz uses a fish-eye lens for extreme close-ups of all the suspects as they're gathered at a victim's funeral. Eurocult aficionados will find EDGE OF THE AXE of interest for the presence of Spanish exploitation stalwarts Shepard, Taylor, Modlin, and May Heatherly (best known to bad movie fans as the hysterical mom finding the nudie jigsaw puzzle in the opening sequence of PIECES), all American expats who spent virtually their entire careers in Europe, all seen here acting with live sound and using their actual voices, which were rarely heard in the era of post-sync dubbing (other than a couple of bit players, everyone is using their own voice, which explains Moro's thick accent). The appearance of these actors is also the tell on which scenes were shot in Big Bear, CA and which were done in Madrid, Spain. EDGE OF THE AXE bogs down a bit in the middle, but the murders are surprisingly brutal and the killer's reveal in the climax, while goofy as shit, makes for a pretty wild finish. 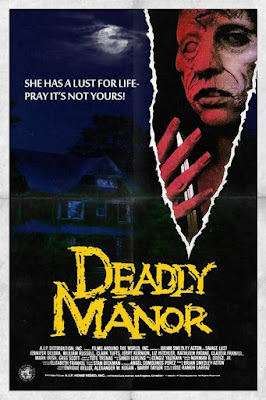 Larraz's penultimate feature film and his last in the horror genre, 1990's DEADLY MANOR is a lifeless slasher outing that's about eight years late to the FRIDAY THE 13TH ripoff party. It feels even more unfashionably tardy when you consider that it wasn't even released in America until it went straight to video in 1993, misleadingly rechristened SAVAGE LUST, with cover art featuring someone who isn't even in the movie but bears a striking present-day resemblance to Brie Larson. A Spanish/US co-production shot in and around Suffern, NY in the summer of 1989, DEADLY MANOR doesn't have any of the usual suspects in Spanish exploitation in its cast and is Larraz's most American-looking film by far, and as such, it's surprising he uses his real name instead of his trusty "Joseph Braunstein" alias. It also reunites him with his VAMPYRES producer and holder of the world's most British name until the dawn of Benedict Cumberbatch, Brian Smedley-Aston, but they decidedly fail to recapture that old magic. A group of college kids en route to a camping excursion get lost, pick up a brooding, bad-boy hitchhiker (Clark Tufts) who knows the way, and decide to crash at an abandoned house in the woods when it gets dark. Despite the discovery of a smashed car, coffins in the basement, scalps in jars in a closet, and photo albums of nude corpses, they stick around and are soon offed one by one in predictable fashion. 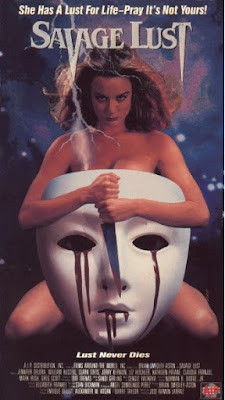 I guess there's some surprises in their order of exit--the one who's overly cautious, legitimately afraid and keeps saying "We need to get out of here" (Claudia Franjul) would usually be the final girl, but here, she's the first one to bite it. But all the slasher genre archetypes are here, including the sexually voracious one who pays the price for promiscuity (Liz Hitchler), the preppy (Mark Irish), the dudebro tough guy (Greg Rhodes), and the loud, obnoxious fat dude (Jerry Kernion) who, after seeing the gruesome discoveries inside the deadly manor, snarks "What's next, Uncle Fester on the patio?" It would've helped a little if any of these characters were likable or if any of the actors were good, but the performances are terrible across the board. The killer is a disfigured woman (Jennifer Delora, the only main cast member other than Kernion who's still eking out a living as a working actor) who wears a Phantom of the Opera mask and has an axe to grind just like Mrs. Voorhees for reasons that have nothing to do with these intruders, and considering the amount of bodies on the property and in the house, you'd think the cops would be alerted to a missing persons epidemic in this secluded area. There's no logic here, and the whole subplot with the hitchhiker being an escaped con is a time-wasting McGuffin that goes nowhere. Larraz made one more film, the 1992 action comedy SEVILLA CONNECTION, which was never seen outside of Spain, and he finished his career with the 2002 Spanish TV miniseries VIENTO DEL PUEBLO, a biopic of poet Miguel Hernandez. He was active on bonus features in the DVD era, most famously on Anchor Bay's 2000 release of VAMPYRES, on a memorably pervy and hilarious commentary track with Smedley-Aston that would likely get both men canceled today. 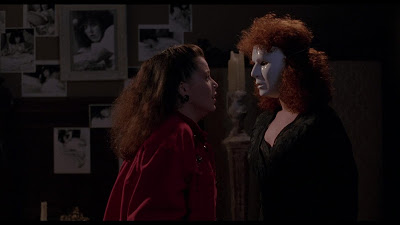