Retro Review: THE HORROR OF FRANKENSTEIN (1970) 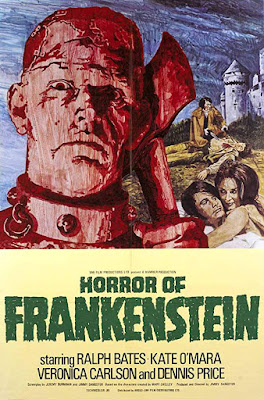 One of the least-loved films in the Hammer horror cycle, 1970's THE HORROR OF FRANKENSTEIN was intended as a reboot of their FRANKENSTEIN series as part of a calculated effort to skew toward a younger and more hip audience. By this time at the dawn of the '70s, audience interest was waning and Hammer decided to shake things up, with their general feeling being that 48-year-old Christopher Lee and 57-year-old Peter Cushing--the faces of "Hammer horror"--were starting to get on in years, relatively speaking. Cushing had just co-starred in THE VAMPIRE LOVERS, the first of the so-called "Karnstein trilogy," a film that represented a sort-of turning point for Hammer in that it went all-in on excessive gore and gratuitous nudity from Ingrid Pitt and the female cast members. But when it came time for the follow-up to 1969's FRANKENSTEIN MUST BE DESTROYED, Hammer opted to head in a different direction, ditching Cushing to make a desperate grab for the youth market and placing most of their hopes on the shoulders of one Ralph Bates. A busy British TV actor (most notably appearing as Caligula in the 1968 six-episode ITV series THE CAESARS), Bates was already being groomed as Hammer horror's heir apparent when he was cast in 1970's TASTE THE BLOOD OF DRACULA, which, in its earliest stages, wasn't even supposed to feature Christopher Lee's Dracula, instead focusing on Bates as Lord Courtley, a Satanist disciple of the vampire. Lee was growing increasingly dissatisfied with the direction of the DRACULA series and made no secret of his feelings to anyone who would listen. Nevertheless, it was at some point decided that he had to be in it, so the script was hastily rewritten to have Courtley supernaturally transform into Dracula, thus reducing Bates' role in the film to make way for Lee. The 30-year-old Bates took one for the team, and was rewarded by being made the new Victor Frankenstein in the same year's THE HORROR OF FRANKENSTEIN, replacing Cushing as part of Hammer's new youth-driven direction. This didn't seem to bother Cushing in the slightest, as he paid a visit to the set and even posed for some publicity shots with Bates. Perhaps he was as tired of playing Dr. Frankenstein as Lee was of playing Dracula, but just wasn't such a surly pain in the ass about it.


THE HORROR OF FRANKENSTEIN was the directing debut of veteran Hammer screenwriter Jimmy Sangster, a key figure who was instrumental in establishing the studio as the UK's premier House of Horror, having scripted their first three Cushing/Lee teamings: 1957's THE CURSE OF FRANKENSTEIN, 1958's HORROR OF DRACULA, and 1959's THE MUMMY, among many others. Sangster would ultimately prove to be a better writer than a director, quickly bailing on his short-lived directing career after just three films--all of which starred Ralph Bates--to return to his better-suited screenwriting occupation. A loose remake of THE CURSE OF FRANKENSTEIN, THE HORROR OF FRANKENSTEIN again tells the Frankenstein origin story, beginning with Bates' sociopathic Victor in school, where he's introduced showing up a harumphing professor and and manipulating him into believing he's having a heart attack. When his rich father Baron Frankenstein (George Belbin) refuses to pay for Victor to attend medical school, Victor rigs his father's shotgun to blow up in his face the next time he goes hunting. With the Baron out of the way, Victor inherits Castle Frankenstein, leaving it in the care of 16-year-old servant and the Baron's sexual plaything Alys (Kate O'Mara) while he goes off to university in Vienna. Six years later, Victor and his friend Wilhelm (Graham James) return to the castle, where Victor grows obsessed with reanimating the dead and assembling a man out of body parts collected by a team of husband-and-wife grave robbers (Dennis Price and Joan Rice). He picks up where his father left off with Alys ("She gave satisfaction to my father and she can do the same for me," Victor sneers to Wilhelm, adding "I hope she can cook"), and is so focused on his work that he barely picks up on the vibes he's getting from former classmate Elizabeth (Veronica Carlson), whose professor father (Bernard Archard) ends up being the source of the brain used in the Monster. Unfortunately, that brain is damaged when the grave robber drops the jar it's in and a glass shard gets stuck in it, turning the Monster (bodybuilder and future Darth Vader David Prowse) into a rampaging lunatic and convenient hit man when Victor needs his enemies eliminated.


As much if not more so than Cushing's interpretation of the character, Bates' Victor Frankenstein is an outrageously vainglorious prick who has absolutely no use for anyone. Starting with orchestrating his father's "accidental" death, Victor will let nothing stand in his way. He electrocutes Wilhelm when he expresses his outrage over his experiments, he kills the grave robber when he decides he knows too much, he has the Monster kill the grave robber's wife when she starts asking questions about her husband, and he tries to pin it all on his hapless, slow-witted cook Stefan (Stephen Turner) when former classmate and current chief of police Henry (Jon Finch, soon to star in Roman Polanski's MACBETH and Alfred Hitchcock's FRENZY) comes around to investigate. Bates' smug, arrogant Victor is like a Donald Trumpenstein, throwing everyone under the bus at the first sign of minor inconvenience or demonstrating even the slightest threat of disloyalty, treating Alys like shit, and stopping just short of shouting "FAKE NEWS!" when too many people have seen the Monster roaming around the woods and Henry demands to search the castle. All the pieces are in place for THE HORROR OF FRANKENSTEIN to work, but it just never quite pulls itself together. Bates is fine in the role and much of the humor is intentional (Victor's killing of a pair of highwaymen is very funny), but the film just plods along, taking forever to get going (it's nearly 70 minutes in before the Monster even appears), and as a director, Sangster lacks the style and verve that guys like Terence Fisher, Freddie Francis, Roy Ward Baker, and even Peter Sasdy, for that matter, would always bring to the table. The film looks stagy and cheap, and Prowse's square head apparatus doesn't hold up under the scrutiny of HD on Scream Factory's new Blu-ray (because physical media is dead). Prowse, who would soon have a small but memorable role as the hulking nurse of Patrick Magee's wheelchair-bound Mr. Alexander in Stanley Kubrick's A CLOCKWORK ORANGE, is imposing enough, but he looks ridiculous, spending most his limited screen time shirtless, wearing only bandages from the waist down, which many have observed makes him look like he's wearing a diaper. 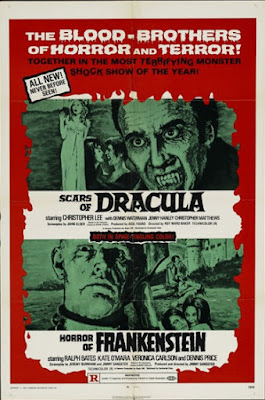 In short, nobody liked THE HORROR OF FRANKENSTEIN, neither in the UK nor in the US, where it appeared in the summer of 1971 on a drive-in double bill with the harder-edged SCARS OF DRACULA, easily the most violent of the Christopher Lee DRACULA outings. Hammer continued in their attempts to make Bates happen, first by reuniting him with Sangster on the second film in the Karnstein trilogy, 1971's LUST FOR A VAMPIRE, then by casting him as Dr. Jekyll opposite Martine Beswick in the same year's gender-bending DR. JEKYLL AND SISTER HYDE, and finally teaming him with Joan Collins, Judy Geeson, and--wait for it--Peter Cushing in Sangster's 1972 thriller FEAR IN THE NIGHT. By this time, it became apparent to Hammer that Ralph Bates wasn't the answer to the problems (nor, for that matter, was having Sangster behind the camera). Other than occasional non-Hammer supporting roles (he appeared with Lana Turner and Trevor Howard in 1974's PERSECUTION, and with Collins and Donald Pleasence in the 1976 demonic baby outing THE DEVIL WITHIN HER), he spent the rest of his career as a regular fixture on British TV, including the lead on BBC's DEAR JOHN, which ran for two seasons starting in 1986 and would be remade a couple of years later into the hit NBC sitcom with Judd Hirsch. Bates' last screen appearance came in a small role in 1990's little-seen period adventure KING OF THE WIND. He was just 51 when he died of pancreatic cancer in 1991. 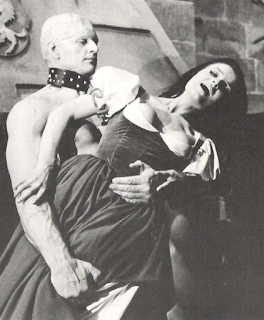 What Hammer didn't realize at the time in their grooming of Bates was that the horror landscape was changing. In 1968, ROSEMARY'S BABY was a sign of things to come, but it didn't become apparent until THE EXORCIST in 1973 that the concern wasn't Christopher Lee and Peter Cushing (or Ralph Bates)--it was simply a genre trend that saw a declining interest in "classic" horror. This became clear with 1972's DRACULA A.D. 1972, and 1973's THE SATANIC RITES OF DRACULA, which found Hammer reaching a compromise in their shameless youth pandering by dropping their "aging" stars and their respective Dracula and Van Helsing characters into mod, swinging 1972 London in all its shagadelic glory. It wasn't any kind of happening and fans were decidedly not freaked out, and as a result, ambitious, inventive, and very entertaining period adventure/horror hybrids like CAPTAIN KRONOS: VAMPIRE HUNTER and THE LEGEND OF THE 7 GOLDEN VAMPIRES were forced to languish on the shelf for extended amounts of time because Hammer had grown skittish about their product. 1974 saw the release of FRANKENSTEIN AND THE MONSTER FROM HELL (like CAPTAIN KRONOS, completed in 1972 and unreleased for two years), which brought back Prowse as a much-different and more ape-like monster than he played in THE HORROR OF FRANKENSTEIN. Even with veteran Hammer director Terence Fisher returning (in what ended up being his final film before retiring from the business), along with Peter Cushing stepping back into his signature role, its focus was less on classic horror and more on graphic gore. And still, it was a critical and commercial flop and marked the end of the road for Hammer's FRANKENSTEIN series.