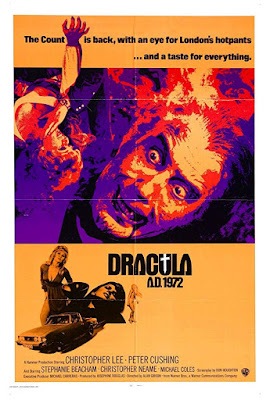 By 1972, Christopher Lee wasn't even trying to hide his seething contempt for Hammer's ongoing DRACULA series. He portrayed the Count in five Hammer productions going back to 1958's HORROR OF DRACULA, and in between two entries in 1970 (TASTE THE BLOOD OF DRACULA and SCARS OF DRACULA), he went to Spain to star in Jess Franco's COUNT DRACULA with the promise that it would be the faithful-to-Bram Stoker adaptation that he'd spent years pleading with Hammer to make. Hammer still wasn't listening, and in 1972, following their attempts to capture the youth market with the increased T&A of HORROR OF FRANKENSTEIN and THE VAMPIRE LOVERS, they decided to move Dracula to mod, swinging London in all its Austin Powers glory with DRACULA A.D. 1972. It's not a bad idea, and the film's an entertaining time capsule that's proven to have significant longevity as a genre cult favorite, but it just doesn't have enough of Lee, who's in it so sporadically that there's no way he was on the set for more than a few days. That was likely by design, as Lee made it clear he didn't want to do the movie, even though it marked the return of Peter Cushing, as Dracula's arch-nemesis Van Helsing, to the franchise after 12 years away following 1960's Dracula-less THE BRIDES OF DRACULA. 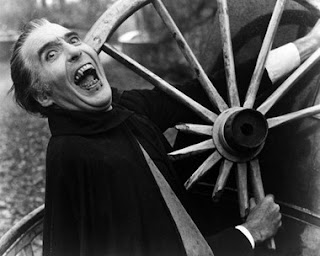 A.D. 1972 gets off to a roaring start with a prologue set in 1872, with Dracula (Lee) and Lawrence Van Helsing (Cushing) fighting on a runaway coach as daybreak approaches. The coach crashes, with a broken wheel impaling Dracula in the heart as the rising sun turns him to dust, with Van Helsing soon succumbing to his injuries. A Dracula disciple (Christopher Neame, really busting his ass to be the next Malcolm McDowell) arrives on the scene, gathers some of Dracula's ashes in a vial and buries them at the perimeter of a churchyard cemetery that's Van Helsing's final resting place. 100 years later, that seemingly undead disciple is revealed to be Johnny Alucard (clever!), a black-mass enthusiast who hangs out with a group of Chelsea hippies that includes Jessica Van Helsing (Stephanie Beacham), who lives with her grandfather Lorrimer Van Helsing (Cushing), a descendant of the legendary vampire killer. Alucard needs Jessica for his master plan: the resurrection of Dracula for his master's ultimate revenge on the Van Helsing family. She proves difficult to pin down and get alone, thanks in part to her boyfriend Bob (Philip Miller) but more to her skeptical, overprotective grandfather, who's convinced something isn't right, especially when her friends start turning up dead. As Dracula takes refuge in the ruins of the church located at the cemetery where Lawrence Van Helsing is buried, Alucard tries to placate him with offerings like Jessica's friends Laura (Caroline Munro) and Gaynor (Mick Jagger's then-girlfriend Marsha Hunt, considered by many to be the inspiration for "Brown Sugar"), but the Count remains adamant that he must have Jessica. Alucard attempts to stage the dead bodies of the victims as cult-like sacrifices, but Lorrimer, working with Scotland Yard's Inspector Murray (Michael Coles) has studied his ancestor enough to recognize the work of Dracula when he sees it.

Given Lee's surly attitude toward the franchise and the character at this point, it's little wonder that most of the heavy lifting is left to the presumably less mercurial Cushing. Lee may have hated doing these movies, but the film has a noticeable spark whenever he's onscreen, particularly when he's with his good friend Cushing. There's a lot of time devoted to Jessica and her friends, including a ridiculously drawn-out sequence involving American rock group Stoneground, and the detective subplot with Van Helsing teaming with Murray serves to advance the plot, but A.D. 1972's best scenes involve Dracula, with Lee channeling his frustration into a portrayal of the Count that's arguably his meanest and cruelest yet. He doesn't even seem grateful for his disciple's 100 years of service to his memory, instantly dismissing him upon his Alucard-instigated resurrection and taking credit for it himself ("It was my will," he scoffs, waving Alucard aside). The problem is that Dracula has so little screen time (after the prologue, he has one appearance in the next hour) that, like many of Lee's performances during this period, is really little more than an extended cameo spread out enough to make it look like he's in the whole thing. It's difficult to tell if this is the result of his frustration or the root cause of it, considering that he actually had a lot of screen time in SCARS OF DRACULA. DRACULA A.D. 1972 was a box-office disappointment in both the UK and in America, where it was released by Warner Bros. Nevertheless, Hammer wasn't deterred, as Lee, Cushing, Coles, writer Don Houghton (DOCTOR WHO), director Alan Gibson (CRESCENDO, GOODBYE GEMINI), and the contemporary setting would all return for 1973's THE SATANIC RITES OF DRACULA. 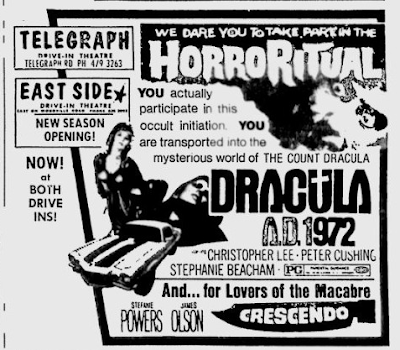 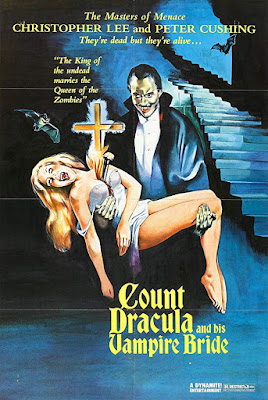 THE SATANIC RITES OF DRACULA
aka COUNT DRACULA AND HIS VAMPIRE BRIDE
(UK - 1973; US release 1978)

If it was a stretch to imagine Dracula going after "London's hotpants," as the DRACULA A.D. 1972 poster promised, then who knows how they came up with the insane plot of THE SATANIC RITES OF DRACULA? It's crazy enough to admire, but it never quite pulls its various threads together, and like A.D. 1972, it still doesn't have enough Christopher Lee, who doesn't even enter the story until 30 minutes in and then isn't seen again for another half hour. Indeed, anyone watching SATANIC RITES' first 25 minutes might think they've accidentally stumbled on a Michael Coles police procedural, as his returning Inspector Murray catches a case involving a dead SIS agent's undercover investigation of a Satanic cult that's populated by a quartet of prominent Londoners, among them Nobel Prize-winning biochemist and germ warfare expert Prof. Keeley (Freddie Jones), real estate mogul Lord Carradine (Patrick Barr), government security analyst Dr. Porter (Richard Mathews), and military honcho Gen. Freeborn (Lockwood West). A stumped Murray and SIS official Torrence (William Franklyn) decide to consult occult expert Lorrimer Van Helsing (Peter Cushing), who happens to be an old college chum of Keeley's. Van Helsing discovers that Keeley has been secretly developing a new and ultra-lethal strain of bubonic plague that could wipe out mankind on the 23rd of the month--known in the occult world as "The Sabbat of the Undead," all under the auspices of a secret foundation bankrolled by enigmatic, reclusive Howard Hughes-like tycoon D.D. Denham, whose skyscraper headquarters is located at the location of the demolished church from A.D. 1972. 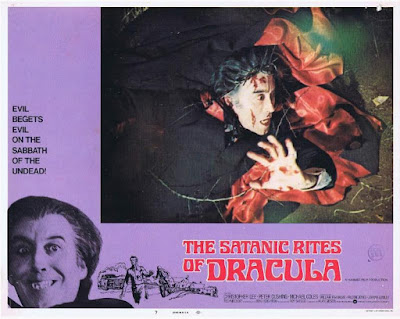 Once Van Helsing gets wind of "The Sabbat of the Undead," he immediately concludes that Dracula is somehow involved, which is confirmed when he's granted a personal meeting with Denham, who's revealed to be--you guessed it--Dracula. His latest plan--apparently concocted after seeing too many 007 movies in his downtime--is to unleash a bubonic apocalypse that will wipe out humanity and yet, he still needs to abduct Van Helsing's granddaughter Jessica (future ABSOLUTELY FABULOUS star Joanna Lumley replaces Stephanie Beacham) and take her as his bride, which will render the two of them immune from the apocalypse, carried out by his own personal "Four Horsemen." The bonkers SATANIC RITES fared even worse at the box office than A.D. 1972. After a disastrous reception in Europe, Warner Bros. shelved it in the US, eventually selling it to exploitation outfit Dynamite Entertainment, who belatedly released it on the American drive-in and grindhouse circuit in the fall of 1978 as COUNT DRACULA AND HIS VAMPIRE BRIDE. Once SATANIC RITES bombed, Lee, who's again terrifically snarling once he finally shows up (and his Bela Lugosi accent as D.D. Denham is...something), finally reached his breaking point and refused to appear in the next film, the 1974 Hammer/Shaw Brothers horror/kung-fu hybrid THE LEGEND OF THE 7 GOLDEN VAMPIRES. In it, Cushing's Van Helsing teams with a family of Bruce Lee-like karate experts to take on Dracula, now played in a bland and ineffective fashion by Lee's one-and-done replacement John Forbes-Robertson. The film was recut and retitled THE 7 BROTHERS MEET DRACULA for its 1979 US release, but by that time, the franchise and Hammer itself were over. With genre trendhops like SATANIC RITES' outlandish 007 plot and the ENTER THE DRAGON-inspired martial arts action of 7 GOLDEN VAMPIRES, it would've been inevitable that Dracula and Van Helsing would've somehow ended up in space if the series was still going when STAR WARS came around in 1977. 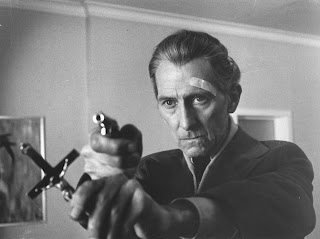 THE SATANIC RITES OF DRACULA's biggest problem is that it's never as fun as its crazy story makes it sound. It's also pretty stupid: why would Dracula and his surrogate Renfield in the form of Chin Yang (Barbara Yu Ling) keep his vampire brides stashed away in a basement with a fully-functioning and easily-accessible sprinkler system when water is lethal to the undead? And for someone with the means to create the ultimate weapon in germ warfare, Dracula seems to be off his game here, especially when Van Helsing tricks him into walking directly into a giant prickly bush like a cloddish oaf and getting caught in its vines and branches in what could very well be Dracula's dumbest-ever movie demise. Under both of its titles, SATANIC RITES ended up falling into the public domain and was available in various versions on any number of cheap, bargain-bin DVD sets over the last 20 years. It's just out now on Blu-ray from Warner Archive, who also released a spiffed-up A.D. 1972 last month (a double feature set would've been perfect). To see the constant posts on Hammer's fan page on Facebook over the last year, you'd think SATANIC RITES was some lost classic or something akin to THE OTHER SIDE OF THE WIND of Hammer horror. Calm down, guys...it's not that good, but it's a must-have for completists, especially with it looking better that it ever has in this new edition. I like the Dracula-as-Blofeld idea of THE SATANIC RITES OF DRACULA more than what it ultimately turns out to be. But for all its faults, it's always a joy to see the two horror legends together (they also starred in HORROR EXPRESS, NOTHING BUT THE NIGHT, and THE CREEPING FLESH during this same period), and ever the stalwart, Cushing again seems more accommodating to the filmmakers than the disgruntled Lee, playing it totally straight and never once letting on how ridiculous he likely found the entire project to be. 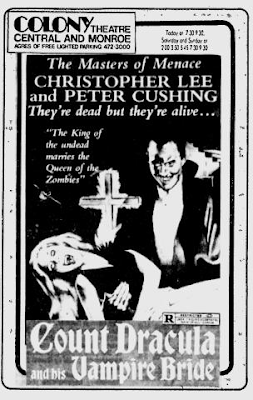