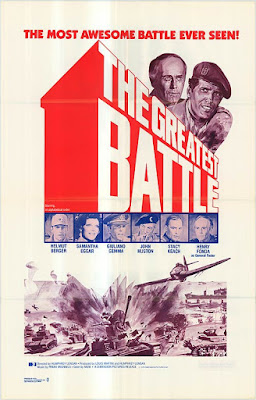 WWII movies were extremely popular all over the world from the mid-1960s through the 1970s, and journeyman Italian director Umberto Lenzi was no stranger to the genre. He'd already made "macaroni combat" movies like 1967's DESERT COMMANDOS and 1969's BATTLE OF THE COMMANDOS in response to the 1967 blockbuster THE DIRTY DOZEN, but then he moved into gialli like 1972's SEVEN BLOODSTAINED ORCHIDS and really hit his stride with a string of ridiculously entertaining and extraordinarily violent poliziotteschi like 1974's ALMOST HUMAN and 1976's ROME ARMED TO THE TEETH among many others. But between his crime movies and his jumping on the post-CANNIBAL HOLOCAUST gut-muncher bandwagon with 1980's EATEN ALIVE and 1981's CANNIBAL FEROX, Lenzi cranked out two more "macaroni combat" films. Differing from the DIRTY DOZEN-inspired "men on a mission" formula of his late '60s genre contributions, 1978's THE GREATEST BATTLE and 1979's FROM HELL TO VICTORY (which starred George Peppard and George Hamilton, the same year he had a huge hit with LOVE AT FIRST BITE) seemed like responses to the more large-scale, all-star ensemble epics that were being produced at that time, like 1976's MIDWAY, 1976's THE EAGLE HAS LANDED, and 1977's A BRIDGE TOO FAR. Both films had casts of big-name actors who carried significantly more prestige than you'd expect in a run-of-the-mill Italian knockoff, but from the looks of THE GREATEST BATTLE, the entire budget went to paying those actors because for the most part, it looks like how a WWII epic might turn out if it was directed by Jess Franco or Al Adamson. 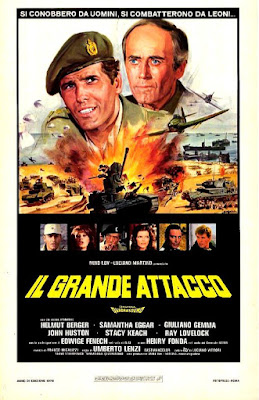 THE GREATEST BATTLE was shown under a plethora of different titles: it was shot in Rome, Almeria, and Los Angeles in 1977 as IL GRANDE ATTACCO, and then alternately known as THE BIGGEST BATTLE (the title it carries on Amazon Prime), THE GREAT BATTLE, and BATTLE FORCE, but THE GREATEST BATTLE is what it initially went by when drive-in outfit Dimension Pictures released it in the US, cut down to 90 minutes, with Lenzi pseudonym "Humphrey Longan" credited as director, and with added narration by Orson Welles, who's not heard on the complete 102-minute, English-dubbed BIGGEST BATTLE version streaming on Amazon (dubbing fixture Anthony La Penna handles some incidental narration in a few spots). Stacy Keach is among the stars, and in his very enjoyable 2013 memoir All in All, he refers to the film under yet another title, THE MARETH LINE, and calls it "flat-out awful." A fair assessment, though as Keach points out, "It gave me a chance to work with Henry Fonda and John Huston," and they're only a few of the reputable actors called upon to star in a film by the future director of CITY OF THE WALKING DEAD, MAKE THEM DIE SLOWLY, and FATTY GIRL GOES TO NEW YORK. THE GREATEST BATTLE opens in Berlin in 1936 just after the Olympics, as a small group of friendly acquaintances meet for a formal dinner: German Major Manfred Roland (Keach), British war correspondent Sean O'Hara (Huston, not even attempting a British accent) and his wife (Lenzi's wife Olga Pehar Lenzi), West Point legend General Foster (Fonda), and renowned German actress Annelise Ackermann (Samantha Eggar). They discuss the rise of Hitler and his disdain of Jews and "American negroes" in the wake of Jesse Owens' Olympic triumph, but all parties foolishly conclude that everything is fine, that war is unlikely and they'll all be friends for many years to come. 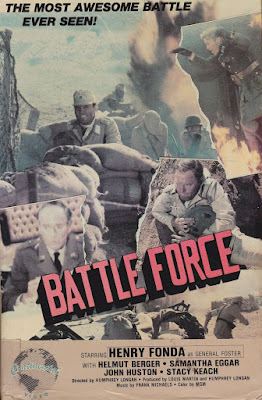 Cut to 1942, and the entire world is at war. From then on, THE GREATEST BATTLE is an episodic and seemingly random series of vignettes that eventually form some semblance of a story but it still feels choppy and haphazardly-assembled. There's copious amounts of stock footage from newsreels and other movies, and sometimes the various film stocks don't even match. Foster's son John (Ray Lovelock) has enlisted after flunking out of college, unable to win over his old man like his older, war hero brother Ted (never seen, but played by a framed photo of future CEMETERY MAN director Michele Soavi); Roland and Annelise are now married, but he's conflicted about pledging his allegiance to Der Fuhrer and the Nazi party and determined to keep Annelise's being half-Jewish a secret from his superiors. We also meet other characters who have nothing to do with the initial expository set-up of the Berlin dinner, such as British Capt. Martin Scott (Giuliano Gemma), his ex-wife (Ida Galli) and her new husband (Venantino Venantini), and German Lt. Kurt Zimmer (Helmut Berger), who's fallen in love with French prostitute Danielle (Edwige Fenech) who may or may not be a member of the Resistance. Some of these people cross paths, and some of them don't. Huston's O'Hara is the most confusing character of them all, a grouchy old cynic who seems far too old to be playing a roving war correspondent chasing a story at the center of the action, and it's anyone's guess why some characters occasionally refer to him as "Professor O'Hara" or why he's shown strutting around and barking orders at some officers in one scene. Huston--just four years removed from co-starring in CHINATOWN--doesn't even seem to know or care what he's doing, as he has one of the most jaw-dropping exits you'll ever see, a barely-concealed breaking of the fourth wall, almost as if he said "Alright, Lenzi, I'm done here...I'll show myself out of this movie." In between the Ovidio G. Assonitis classics TENTACLES and THE VISITOR, Huston isn't even hiding his disinterest in THE GREATEST BATTLE, further evidenced by an anecdote Keach shares in his memoir. Concerned about not overdoing his German accent and having difficulty communicating with Lenzi, who didn't speak English, Keach asked Huston, his director on 1972's FAT CITY and THE LIFE AND TIMES OF JUDGE ROY BEAN, for some advice. Huston replied "I'm only an actor here. I didn't ask you about my accent. Talk to the director," adding "Learn Italian or find an interpreter." 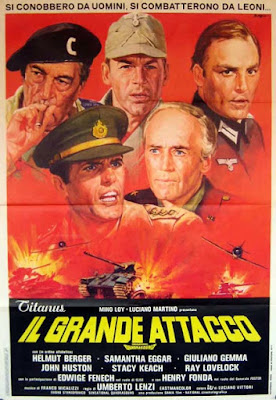 Speaking of TENTACLES, both Huston and Fonda appeared in that 1977 Italian JAWS ripoff about a giant mutant octopus, though they shared no scenes. Fonda has a few fleeting appearances scattered throughout TENTACLES, always on the phone yelling at someone. His entire role was shot in one morning at his house, and his dialogue is vague enough ("Well, take care of it!") that I remain convinced he had no idea he was in a movie about a giant mutant octopus. While Fonda gets out a bit in THE GREATEST BATTLE in both the opening dinner sequence and the closing scene at a cemetery, the rest of his appearances are, once again, by himself and on the phone in what looks suspiciously like a very 1970s Beverly Hills home in which a famous movie star might reside. Was this Fonda's thing prior to capping his stellar career with ON GOLDEN POND? Forcing journeymen Italian directors to make house calls if they wanted him in their movie? THE GREATEST BATTLE makes a lot of noise but very little sense, jumping from place to place with an ensemble whose members vanish for long stretches or right after they're introduced. The supporting cast is an impressive who's who of jobbing Italian supporting actors who always turn up in this sort of genre fare (I'm pretty sure Tom Felleghy owned that general's uniform, and having gravelly-voiced dubber Robert Spafford appear on camera as Gen. George S. Patton was an inspired choice), but the performances of the main cast are all over the map, with Huston looking visibly inconvenienced and demonstrably irritable in a way that borders on acting out, and Fonda mostly phoning it in TENTACLES-style (oddly, in Tony Thomas' 1983 Citadel Press-published The Complete Films of Henry Fonda, THE GREATEST BATTLE was absent even though his role is considerably more than a cameo, and in the early days of pay cable, this aired on HBO quite often). Berger is relatively restrained, considering his reputation and that he'd recently been in the 1976 Nazisploitation epic SALON KITTY, though if anyone can figure out why he and Fenech are even in this, let me know. The usually reliable Eggar is absolutely awful, but for whatever reason, Keach, the same year he co-starred in Sergio Martino's vile MOUNTAIN OF THE CANNIBAL GOD, is trying a lot harder than his other big-name co-stars and is the only one who seems interested in creating a three-dimensional character, even if the sloppiness of Lenzi's direction and the scattered script by Lenzi and Cesare Frugoni give him little with which to work. Franco Micalizzi's by-the-numbers "rousing" score lacks the maestro's usual catchy pizazz, and some of the miniatures in the battle sequences would make Antonio Margheriti cringe and look away in embarrassment. But for fans of "macaroni combat" movies, there's plenty of action sequences and a lot of big and loud explosions. Just don't expect it to make much sense. Maybe that's why Huston looks like he's breaking character and literally walking out of the movie.