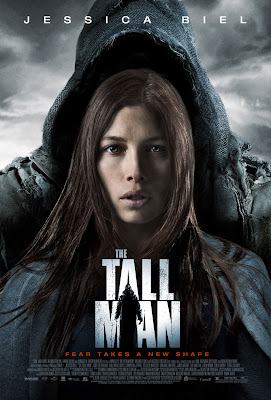 Writer/director Pascal Laugier made a name for himself with 2008's savage horror film MARTYRS.  His follow-up film THE TALL MAN (no connection to Don Coscarelli's PHANTASM films) goes in a different direction stylistically, with almost no gore and with the focus being more on psychological horror.  In a lot of ways, it feels like a throwback that reminded me of all those great 1970s made-for-TV horror movies (when's the last time you saw quicksand in a movie?).  THE TALL MAN has a lot of ambition and tries to cover a lot of ground, and while, like MARTYRS, it's a provocative, imaginative, and sometimes daring film, it doesn't quite hang together despite a lot of positive ingredients.  It doesn't always work, but it's an admirable effort that really tries to do something different, and succeeds a bit more than it stumbles.  In a surprisingly strong performance, Jessica Biel is a widowed mom and doctor in the poverty-stricken former mining town of Cold Rock, outside of Seattle.  The mine closed years ago and the town is a wreck, with abandoned houses and wild dogs roaming the streets.  The only thing going on in Cold Rock is a traumatic string of child abductions by a figure known locally as The Tall Man.  The Tall Man apparently lives in the forest, and local mute teen Jodelle Ferland (the little girl from SILENT HILL back in 2006) claims to have seen him.  Cold Rock sheriff William B. Davis (THE X-FILES' Cigarette-Smoking Man!) mainly hangs out at the greasy spoon being useless while big-city detective Stephen McHattie investigates.  Sure enough, Biel is awakened one night and witnesses her young son being abducted by The Tall Man, but that's only the beginning of the story.


Laugier's structuring is unpredictable in that the film's primary twist happens unusually early on, and the rest of it deals less with the What's than with the Why's and How's.  Laugier very effectively plays his cards close to the vest, relying on subtlety and atmosphere, with some really nicely-done bits of editing, cinematography, and aerial and tracking shots. The problems arise when we're expected to swallow far too many implausibilities and inconsistencies, chief among them being how 18 children can go missing in a town this small and unpopulated with no one aware of what's really going on. The ultimate reveal comes not via bombastic surprise ending, but is rather low-key, contemplative, and doesn't provide any easy answers ("Right?  Right?  Right?").  Biel shows some serious chops here, but there's admittedly not much of a mainstream audience for a film like THE TALL MAN, especially for Laugier fans expecting a blood-and-torture-filled MARTYRS retread.  It's a slow and methodical little film with some unfortunate plot holes and logic gaps and it maybe could've used another script polish and maybe some tightening, but it's also unusually thoughtful, restrained, and serious for a horror film in 2012. (R, 106 mins, also streaming on Netflix) 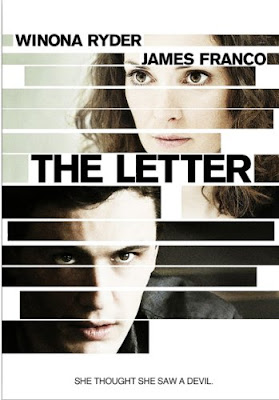 Remember when Lionsgate tried to sell William Friedkin's BUG as a mainstream horror movie?   They must be employing the same crew of bullshit artists in their marketing department, as their artwork ("She thought she saw a devil") and trailer for THE LETTER constitute 2012's most deliberately and willfully misleading ad campaign.  They're selling it as a suspense thriller with horror elements when in fact it's unwatchable film-school drivel trying to pass itself off as artsy and serious.  NYC writer Martine (Winona Ryder) is directing what looks to be the worst play ever staged and her life begins to unravel with the arrival of co-star Tyrone (James Franco), a manipulative, perpetually-smirking dick whose demeanor rubs everyone the wrong way.  Martine's relationship with boyfriend/co-star Raymond (Josh Hamilton) gets increasingly rocky as she constantly revises the script and the lines between fiction and reality blur and blah blah blah.  Lots of banal, stream of consciousness, freeform narration from Ryder as her character may or may not be in the midst of a schizophrenic episode and she may or may not be involved a hit and run accident involving a journalist (Dagmara Dominczyk).  Written and directed by Jay Anania, Franco's NYU film professor who previously directed the actor in 2010's instantly obscure SHADOWS AND LIES.  Somewhat reminiscent of Abel Ferrara's DANGEROUS GAME (1993), THE LETTER is a 90-minute Jay Anania home movie, probably made possible by the director's friendship with a famous, Oscar-nominated student.  It's amateurishly-shot and cheap-looking, almost like it's a class project where the assignment is to re-imagine BLACK SWAN as if directed by Henry Jaglom, and it's on roughly the same entertainment level as being waterboarded.  Possibly the worst film of 2012.  Look at this clip.  MUST LOVE JAWS is a more honest trailer than this.  (R, 94 mins)

Written and produced by BURIED director Rodrigo Cortes, APARTMENT 143 (the original Spanish title EMERGO still remains on the film itself) attempts to fuse together all of the found footage films of the last few years, but it's done POV style so we see it as it happens.  Heavily indebted to PARANORMAL ACTIVITY, the film has a team of parapsychologists led by Michael O'Keefe investigating supernatural happenings in one unit of a dilapidated apartment building in downtown Los Angeles.  They've been hired by widower Kai Lennox, who lives with his angry teenage daughter Gia Mantegna (Joe's daughter, and she looks just like him) and four-year-old son Damian Roman, to get to the bottom of strange happenings that have followed them from their previous residence, and it all started when his wife died.  Cortes can't seem to settle on what exactly is going on here, so he just rips off everything before skidding to a thoroughly unsatisfying conclusion.  O'Keefe's insistence that hauntings and ghosts aren't real and there's no such thing as supernatural events and poltergeists doesn't really gel with the fact that they all clearly see the mother's ghost appear, but promptly forget about it as mandated by the made-up-as-it-goes-along script.  And even after Mantegna becomes visibly possessed and starts speaking in her mother's voice and doing a by-the-numbers EXORCIST impression, O'Keefe still stupidly writes it off as "early onset schizophrenia," with the possibility that it's a manifestation of buried memories of child molestation.  Rooms shake, winds howl, people are hurled across the room, laptop files erase themselves, motion sensors activate, pictures turn themselves upside down, tea kettles move themselves off the stove, and Mantegna levitates, and it's all just hormones and pent-up teen rage.  Director Carles Torrens stages a couple of decent jolts, but Cortes' script somehow manages to go in twenty different directions without really going anywhere, and it's all capped off with a not-so-twist ending that proves the dumb doctor wrong anyway.  You've seen it all before, and much better. At least it's short. (R, 80 mins, also streaming on Netflix)