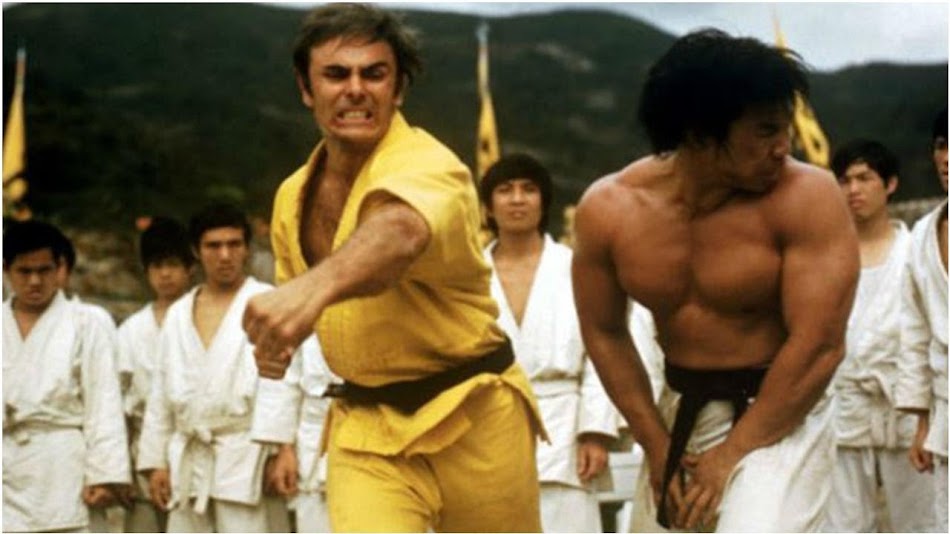 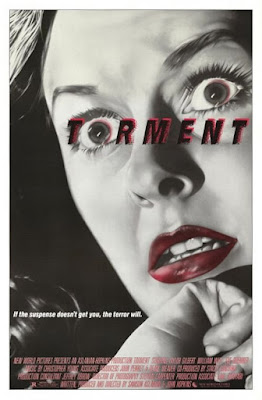 The mid-film plot twist in TORMENT is such a whopper that with some higher-caliber actors, the film could've been a minor hit. A low-budget indie shot in San Francisco for $160,000, TORMENT was picked up by New World, but they only gave it a limited release in the spring of 1986 on its way to every video store in America, where it found a small cult following that's managed to keep it to themselves all these years. Just out on Blu-ray from Scorpion (because physical media is dead), it's a tangential offshoot to the work of the '80s cult team of Jeffrey Obrow and Stephen Carpenter, who had some drive-in and cable success with 1982's THE DORM THAT DRIPPED BLOOD and 1984's THE POWER en route to their most-remembered film, 1987's THE KINDRED. Samson Aslanian and John Hopkins were part of the Obrow/Carpenter crew--Aslanian was the production manager and Hopkins was assistant director on both DORM and POWER--and the two were looking to make their own movie. They conceived TORMENT and managed to get most of their buddies onboard, with Carpenter doing them a solid by serving as cinematographer and Obrow credited as "production consultant" (also part of the gang was co-producer and post-production supervisor John Penney, who would go on to write and direct the 2006 punchline ZYZZYX ROAD). Made when the '80s slasher boom was starting to wind down and special effects were all the rage, TORMENT is a film out of its own time. It's certainly got some '80s elements in terms of very intermittent splatter and a handful of swear words, but with its "women-in-peril" motif and one of the main characters being an old lady in a wheelchair, it feels more in line with a LADY IN A CAGE or a HUSH...HUSH, SWEET CHARLOTTE of the '60s or maybe even a '70s TV movie. Judging from its poster art and the tag line ("If the suspense doesn't kill you, the terror will"), and the spoiler-filled trailer, New World didn't seem to know how to sell TORMENT. But despite some first-movie jitters and some performances that aren't as polished or nuanced as they'd be with more experienced actors, it's a surprisingly engaging and well-crafted little thriller that goes into some genuinely unpredictable directions. 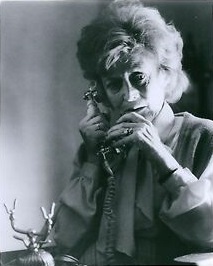 Retirement-age proto-incel Bob (William Witt, Aslanian's high school drama teacher) takes co-worker Diane (Lisa Ramirez) out for a drink only to have her leave with a douchebag Porsche salesman (Dan Kosloff). Enraged and insulted when the cock-blocker calls him "Dad," Bob follows them back to Diane's place and kills them. But that's just the latest in a string of murders that has San Francisco cop Michael Courtland (Warren Lincoln) convinced it's the same perp. Courtland is a couple of weeks away from his wedding to Jennifer (Taylor Gilbert), and she still has yet to meet his cranky, wheelchair-bound mother (Eve Brenner). He insists Jennifer stay at the house with her, but Mom proves a handful with her abrasive demeanor. Mrs. Courtland has a habit of crying wolf to the cops about prowlers and when she insists there was a man in her room, nobody really believes her, starting with Jennifer. But there was a man in her room and he's still hiding in the house--it's Bob, who's the serial killer Courtland's pursuing. Bob is starting to feel the heat and knows from TV reports that Courtland is close to nabbing him, so he's launching a pre-emptive strike by going after those close to the cop. Or is something else entirely unexpected going on? 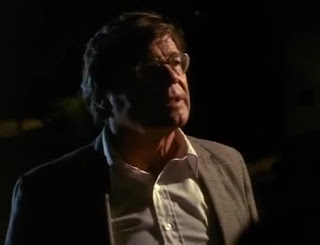 The twist is a legitimate jolt (as long as you don't watch the trailer or read the synopsis on the Blu-ray package), even if some of the expository logic isn't, and again, actors with more time in front of the camera could've navigated their way through things like that and smoothed over the rough edges. Witt was no doubt a fine teacher who was an inspiration to Aslanian, but he's out of his element here, as is Lincoln, who's only other movie was Obrow/Carpenter's THE POWER. You can tell before you even consult IMDb who the career actors are here. Gilbert may never have had another lead role in a feature, but she acquits herself well and has remained a working actor to this day, even if-- aside from two turns as the mother of Kirsten Dunst's Mary Jane Watson in SPIDER-MAN and SPIDER-MAN 2--it's mostly tiny roles in hits like TWISTER, FORCES OF NATURE, and HANCOCK. Likewise, Brenner, while not exactly well-known, was plugging away on stage and screen in a career that dated back to the early '50s, and does a good budget-priced version of Bette Davis and Sylvia Sidney throughout. Aslanian and Hopkins manage to frame the exteriors of the house in such a fashion to hide that it's in a residential neighborhood and not actually in the outskirts of the middle of nowhere, and many shots and camera movements throughout have an undeniable style and panache to them (they also managed to pull off some effective location work at the Fort Point historical site near the Golden Gate Bridge, which does a lot to enhance the production value). Hopkins' never really went anywhere after TORMENT, though he did nab a writing credit on, of all things, 1996's DUNSTON CHECKS IN, but with some of the stylistic touches on display, it's not surprising that by the '90s, Aslanian embarked on a career in music videos, running a production company and working with artists like Madonna, Janet Jackson, Red Hot Chili Peppers, and Alice in Chains.