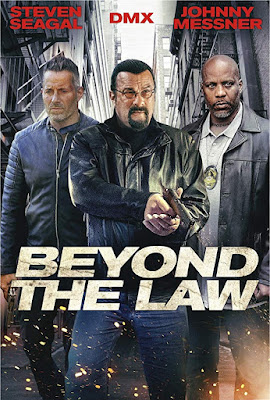 Drably-shot and about as polished as someone's first DIY effort funded by successfully talking their dad into cashing out his 401k, the dreary, amateurish, and cheap-looking BEYOND THE LAW marks a reunion of sorts for Steven Seagal and DMX, the duo previously headlining 2001's EXIT WOUNDS, one of Seagal's last gasps of box office success. "Reunion" might be stretching it, since they don't have any scenes together here, making it quite possible that Seagal has no idea that DMX--or for that matter, Steven Seagal--is even in BEYOND THE LAW. Both have supporting roles, with the real star being Johnny Messner (returning for more Seagal duty after 2016's THE PERFECT WEAPON) as Frank Wilson, an alcoholic ex-cop who we can assume played by his own rules. He goes on a rampage of revenge after his son falls in with the wrong crowd and is killed by Desmond Packard (one-time Uwe Boll semi-regular Zack Ward, further away than ever from A CHRISTMAS STORY's Scut Farkus), the sniveling, dirtbag son of former crime boss-turned-legit businessman--and lemme check and make sure I get this name right--Augustino Finn Adair, played by a cigar-sucking Seagal with his usual N'awlins accent and total indifference to the proceedings. BEYOND THE LAW then turns into a DIPSHIT JOHN WICK--only with a slovenly drunk as its vigilante killing machine--as Wilson goes after Desmond, who's also mounting a challenge to topple his father and restart his old criminal empire (and we know Desmond is intense because he constantly flicks his Zippo while glaring menacingly), a plan probably egged on by his old man trying to tell him to straight up his act and muttering "I feel like I'm talking to a retarded child."

In his first film since spending a year in prison for tax fraud, DMX periodically turns up as Munce, the detective supposedly investigating the murder of Wilson's son (of course admonishing the enraged father with "Look, you're not a cop anymore!") but secretly on Desmond's payroll before he gets the clumsiest death scene since Michael Madsen in BLOODRAYNE. Written by DTV vet Chad Law (DRIVE HARD, CLOSE RANGE, JARHEAD 3) and director James Cullen Bressack (13/13/13 and some other very low-budget Asylum and Unearthed Films horror indies), who also throws in some incongruous jump scares when Wilson keeps imagining seeing his dead son, BEYOND THE LAW leaves no cliche untouched. You get B-movie drinking game staples like Wilson yelling "This ends tonight!" and Munce telling Wilson "You're not an easy man to find," to which Wilson mutters "Sometimes when you can't find a man, it's because he don't wanna be found," a philosophy that must explain Johnny Messner continuing to appear in modern-era Steven Seagal movies. But there's also some real head-scratchers, like Munce getting angry with Desmond because he's never seen GREMLINS ("It's a classic!") and--again, lemme make sure I get this name right--Augustino Finn Adair mumbling to his chief flunky that a meeting with a new "supplier" has to be postponed a day because "I gotta clean up my house." The kind of movie where someone in a bar orders a vodka shot and gets it in a regular-sized red plastic Solo cup because real shot glasses apparently weren't in the budget, BEYOND THE LAW might succeed in fooling some casual Seagal fans who haven't seen anything he's done since HALF PAST DEAD into thinking it's a belated sequel to ABOVE THE LAW upon a cursory glance at the Redbox kiosk. It also shamefully wastes veteran character actor Bill Cobbs as Wilson's fatherly friend, and DEATH WARRANT's Patrick Kilpatrick appears in a thankless role as a bouncer. (Unrated, 90 mins) 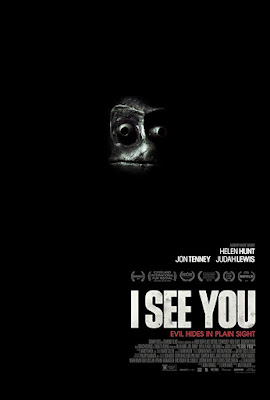 It's surprising that Saban Films didn't give I SEE YOU any kind of a push beyond an ambivalent VOD release. Maybe it's a little too much of a slow-burner for the multiplex, but it's filled with so many twists and turns and rugs being pulled out from under the viewer that you just know it's desperately hoping you don't question its implausibilities until it's over. It's best to go into this knowing as little as possible, but the basic set-up goes like this: in a greater Cleveland suburb, two young boys have gone missing in the woods, with the opening scene showing the second kid seemingly yanked off his bike by an unseen force. The focus shifts to an upper-class neighborhood and the Harpers, a well-to-do family fraught with the kind of simmering tension we haven't seen since HEREDITARY. Therapist mom Jackie (Helen Hunt) is popping pills and trying to repair the damage caused by a brief recent affair. Teenage son Connor (Judah Lewis) is bitter and resentful and wants nothing to do with her, and husband Greg (Jon Tenney) is dividing his time between the couch and the guest room and isn't quite ready to forgive her. Greg's preoccupied, however, since he's the lead detective in the disappearance of the two kids. Evidence is found in the woods that indicates a copycat of a case several years earlier where local boys were targeted by a now-incarcerated pedophile whose victims described him living in "a magic house that disappears." Strange things have been happening in the Harper house: the TV turns itself on, all of their silverware disappears, photos are missing from frames, and when Jackie returns home to find a repairman in the house, he claims a very polite young girl let him in.


At just around the midpoint, director Adam Randall (the British Netflix acquisition iBOY) and first-time screenwriter Devon Graye (an actor probably best known for playing the teenage DEXTER in flashbacks during the show's first two seasons and was later The Trickster on The CW's THE FLASH) deploy their first major twist, and from then on, you never know what to expect with I SEE YOU. It seems like it's not going to stand up under scrutiny, but there's always something happening that shifts your loyalties or puts things in a new perspective that you never saw coming. Yeah, maybe that one bit hinges on a garage door taking an improbably long time to close, but these are hiccups that you just have to roll with, because every time Randall and Graye make a decision that seems like too big of a leap, they manage to steady the ship, almost like they sense your incredulity and are saying "No, wait...just hear us out!" I SEE YOU doesn't go for jump scares and its bigger concern is a slowly mounting sense of eerie dread and unease, but at the same time, it's surprising that Saban didn't even try to sell it. It might've had potential to be a small word-of-mouth sleeper hit like SEARCHING, and it's got an Oscar-winning headliner in Hunt. I SEE YOU is a film that has to be taken on its own terms, and no matter how preposterous it gets on occasion, it's surprisingly effective and often genuinely chilling. (R, 98 mins) 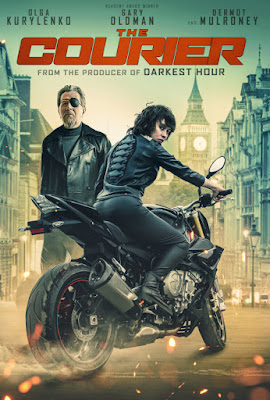 THE COURIER is the kind of dumb thriller that feels the need to accompany an aerial shot of an illuminated Tower Bridge at night with the caption "London, United Kingdom," and soon follows it with an establishing shot of the Washington Monument with the caption "Washington D.C." The opening credits play over quick shots of newspaper headlines that can't settle on whether its main villain is named "Manning" or "Mannings." It's also apparently the kind of movie that Gary Oldman does now, despite winning an Oscar for 2017's DARKEST HOUR, a title that, in retrospect, seems depressingly prophetic considering his 2019 had him in the unwatchable "support group for assassins" comedy KILLERS ANONYMOUS, the possessed yacht horror trifle MARY, and now THE COURIER, a straight-to-VOD DIPSHIT DIE HARD IN A PARKING GARAGE. Sporting a scarred face and an eye-patch like he took a wrong turn on his way to playing the bad guy in a JOHNNY ENGLISH sequel, Oldman puts in a couple of days work as powerful and bizarrely-accented NYC real estate mogul Ezekial Manning(s), who's under house arrest in his luxury penthouse overlooking Central Park while facing charges of fraud and murder, the latter witnessed by lowly office worker Nick Murch (Amit Shah) during Manning(s)'s last trip to London. Murch is under Interpol witness protection and en route to a secret location in London to give video testimony to a hearing in DC when the independently-contracted courier (Olga Kurylenko) hired to deliver the video link is ambushed by the agents, who are secretly on Manning(s)'s payroll with a plot to kill Murch and frame The Courier.


Or, make that "Courier? COUUURRRRRIIIIERRRR?!!!" as psycho Interpol agent Bryant (THE CHRONICLES OF NARNIA's William Moseley, who's matured into an unbelievably terrible actor) keeps tauntingly calling her Luther-from-THE WARRIORS-style, adding other creative bon mots like "Run, rabbit, run!," "Come out, come out, wherever you are!" and "FFFFUUUUUUUCCK!" when the Courier gets the upper hand and takes it upon herself to keep Murch alive and take out the rogue agents one by one in a closed-off parking structure (it somehow took four screenwriters to come up with this shit), forcing Bryant to repeatedly call Manning(s) and inform him the job still isn't done. THE COURIER is just dull, predictable, and brain-dead from the start, and Kurylenko is a capable action star who deserves better material than the leftover table scraps of Milla Jovovich and Noomi Rapace. Dermot Mulroney also pulls some Bruce Willis duty, glowering and pacing around an office as a CIA honcho who may or may not be trustworthy (SPOILER: he's not). And then there's Oldman, who spends almost all of his screen time in one or two rooms of Manning(s)'s posh apartment, ordering the hapless Bryant to "Finish this!" while periodically doing some PROFESSIONAL-inspired shouting at his Ivanka-like daughter (Calli Taylor) and looking at his phone, perhaps waiting for his agent to call with something better than THE COURIER. (R, 100 mins)