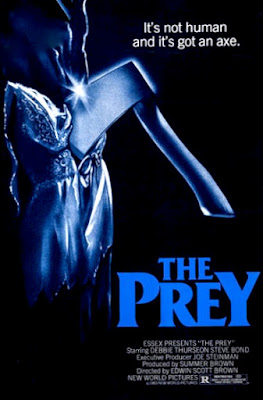 If nothing else, THE PREY serves as proof that anything can merit cult classic status if it's the product of a bygone era that's held in much sentimental regard by genre fans. A fixture in video stores and in regular rotation on late-night cable back in the day, THE PREY has fallen into almost total obscurity in the decades since. So of course, scenesters lost their shit when Arrow announced a deluxe edition Blu-ray, because physical media is dead and every long-lost, forgotten slasher movie must be an unheralded classic waiting to be rediscovered (have none of you seen PET SEMATARY? Sometimes dead is better). Shot in 1979 and 1980 but unreleased until 1984, THE PREY would seem to be indebted to the survivalist likes of RITUALS and it also prefigured the post-FRIDAY THE 13TH slasher explosion (THE BURNING, in particular), but manages to do just about everything wrong. The story seems foolproof enough: three young couples--Nancy (Debbie Thureson) and Joel (future PICASSO TRIGGER star Steve Bond), Bobbie (BLOODY BIRTHDAY's Lori Lethin) and Skip (Robert Wald), and Gail (Gayle Gannes) and Greg (Philip Wenckus)--are hiking and camping through the remote Northpoint area of Keen Wild, the location of a destructive forest fire in 1948, and there's a monstrous, deformed, burn-scarred killer (Carel Struycken) in the wilderness and before long, he's stalking and offing them one by one. 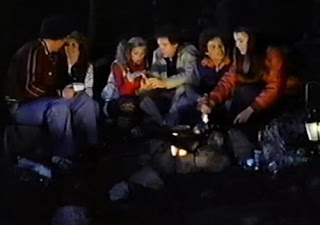 But THE PREY takes a long time to get to where it's going, which is hard to fathom when you consider that it's only 80 minutes long. Director/co-writer Edwin Scott Brown has so little material that he pads the running time with shots of everyone talking, hiking, standing around, and sitting around, in addition to a ton of nature stock footage. It gets even slower with the introduction of a weirdo park ranger (Jackson Bostwick, who looks like a creepy 1979 Zac Efron), who's seen strumming a banjo and having a heart-to-heart chat with a fawn (!) before joining his flummoxed boss (Jackie Coogan, who died in early 1984, several months before the film's belated release) and sharing some cucumber-and-cream cheese sandwiches on oatmeal bread that both actors eat in real time while they alternately discuss a missing middle-aged couple and just sit chewing in silence. It's possible that the free cucumber-and-cream cheese sandwiches are why Coogan even signed on, as he's a long way from his days as Uncle Fester on THE ADDAMS FAMILY and an even greater distance from his time as cinema's first famous child star opposite Charlie Chaplin in 1921's THE KID (as if appearing in THE PREY wasn't demeaning enough, Coogan's introduction is accompanied by the sound of a flushing toilet). Brown and his producer/co-writer wife Summer Brown were undoubtedly working outside of their comfort zone on this one-and-done attempt at mainstream crossover, having already established themselves in the hardcore porn industry, with Edwin directing under a variety of aliases, including "Edwin Durell" and "Stephen Lucas." 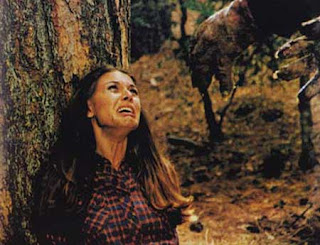 And yet, somehow, THE PREY has a following. And if you're so inclined, rest assured, it's granted a Criterion-level Blu-ray package that offers more of this film than even its most ardent defender thought possible or even within the realm of reason or sanity. While this languished on the shelf for several years before hitting a few American theaters and drive-ins, the financiers at Essex Productions decided to overhaul the whole thing for the overseas market, losing almost all of the nature stock footage and inserting a 25-minute (!) flashback sequence set at a gypsy camp and showing the origin of the killer and how it related to the forest fire in the opening shot. This new footage was shot at some point in 1981, and neither Edwin nor Summer Brown had anything to do with it, despite the presence of some moonlighting XXX stars like John Leslie, Arcadia Lake, and Eric Edwards in a few softcore sex scenes. 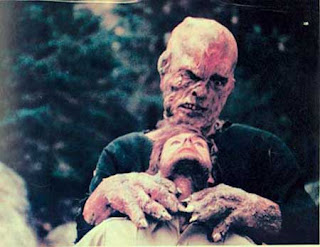 When THE PREY was finally picked up by a post-Roger Corman New World Pictures in 1984, it was the Browns' preferred 80-minute version, minus the "gypsy flashback." As you might guess, Arrow's Blu-ray features not only the 80-minute domestic version and the 97-minute international version, but also a 103-minute (!) composite fan cut which combines the footage from both versions into the ultimate (?) PREY experience. Even in the short version, THE PREY is tedious, terribly-acted, and boring as hell, with absolutely nothing happening until the last 15 minutes, but there are a few scattered positives to be found: the score makes significant use of Stravinsky's "Glorification of the Chosen One," from The Rite of Spring (also known to trash connoisseurs for its presence in Mario Bava's THE HOUSE OF EXORCISM); John Carl Buechler's makeup and latex work on Struycken serves as an amusing test run for the stuff he'd do for Empire Pictures a few years down the road; the last shot is queasily perverse; and some of the location work in Idyllwild and San Bernardino National Forest (the same area where the recent BODY AT BRIGHTON ROCK was shot) is impressive, as are some shots of Bond scaling the famous Suicide Rock. Most importantly, the New World poster art's killer tag line--"It's not human and it's got an axe"--is an '80s exploitation gem that deserves to accompany a much better movie.