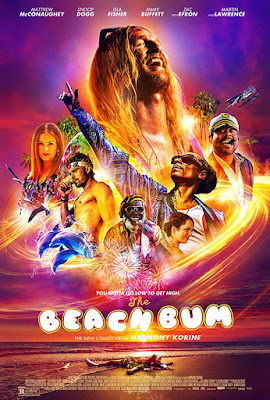 The stoner comedy THE BEACH BUM is a pretty blatant attempt by Matthew McConaughey to give himself his own BIG LEBOWSKI. Like Jeff Bridges, he's practically iconic just by being "Matthew McConaughey," right down to his signature "alright, alright, alright," which will likely be carved into his tombstone. McConaughey tried one of these projects before with 2008's barely-released and largely-forgotten SURFER, DUDE, an ill-advised, self-produced vanity project that came a few years before the vaunted "McConnaissance" that culminated in his Oscar for DALLAS BUYERS CLUB. With THE BEACH BUM, McConaughey puts himself in the hands of writer/director Harmony Korine, who made an enfant terrible splash a generation ago as the 22-year-old wunderkind screenwriter of Larry Clark's controversial 1995 provocation KIDS. Korine went on to direct his own films of varying degrees of unwatchability, like 1997's GUMMO and 1999's JULIEN DONKEY-BOY. He remained on the fringes of the indie scene over the next decade, with 2008's MISTER LONELY getting some acclaim before 2009's TRASH HUMPERS had him back in GUMMO mode. With 2013's instant cult classic SPRING BREAKERS, with perhaps the ultimate James Franco performance, Korine demonstrated an unexpected maturity in his ability to make something relatively multiplex-accessible. THE BEACH BUM again finds Korine in the vicinity of mainstream, albeit with some expected indie and arthouse flourishes, mainly in the form of the same kind of striking cinematography that Benoit Debie provided for SPRING BREAKERS. There's just something hauntingly beautiful about a shot of McConaughey's stoned character dancing in a torrential downpour lit with some SUSPIRIA-esque purple filters with accompaniment by Gordon Lightfoot's "Sundown." 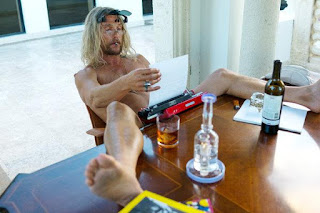 While THE BIG LEBOWSKI had a shaggy dog mystery plot to guide The Dude along in his ambling antics, THE BEACH BUM feels mostly improvised and pretty much a goof on the part of all involved that's equal parts arthouse indie, DAZED AND CONFUSED, Cheech & Chong, and '80s slob comedy propelled by a ton of yacht rock needle drops. In a role he was born to play, McConaughey is Moondog, an affable stoner and Key West folk hero who spends his days smoking weed, drinking PBR, doing lines, getting laid, cruising on his boat christened Well Hung, and hanging with celebrity bros like Jimmy Buffett and Bertie Higgins, even joining the latter onstage at a beachfront bar for a rendition of his 1982 hit "Key Largo." Ostensibly a once-revered poet (think Charles Bukowski crossed with Captain Ron), though his watching an old VHS tape of a nearly vacant reading says otherwise, Moondog gets by on the family wealth passed down to his wife Minnie (Isla Fisher), with whom he's in an open marriage. She's in Miami, hooked up with Moondog's soul-singing best friend Lingerie (Snoop Dogg), and Moondog has just arrived for the wedding of the daughter Heather (Stefania LaVie Owen) to the square Frank (Joshua Ritter), referred to by everyone as "Limpdick." Moondog and Minnie go bar-hopping after the wedding, and a drunk and stoned Minnie crosses left of center and is killed in a head-on collision. Moondog survives and is told by her lawyer (Clinton Archambault) that half of the $100 million inheritance goes to Heather, while his half is held in escrow until he publishes his next long-delayed book of poetry, Minnie's final inspiration to get him off his ass and do something. Instead, he rounds up a bunch of homeless guys and destroys one of his houses, which leads to his arrest and a choice: jail or rehab. Moondog opts for rehab, which lasts almost an entire day before he busts out with Flicker (Zac Efron), a JNCO-wearing, panini-bearded, paint-huffing pyromaniac who once fronted a Creed cover band. 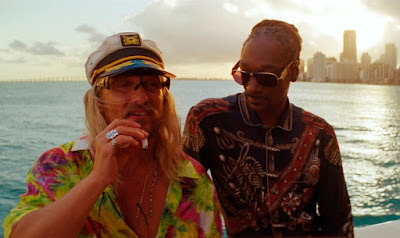 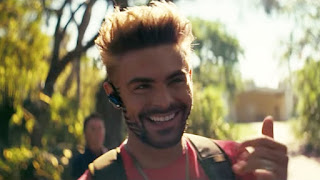 Efron doesn't even appear until around the 50-minute mark, and in about ten minutes of screen time, with the help of some hypnotically captivating facial hair that should be an early front-runner for next year's Best Supporting Actor Oscar, almost manages to steal the movie from McConaughey, bringing a surprisingly dark edge to what's been pretty aimless and easy-going for the most part. Even the grieving over Minnie's death is played for laughs, with Moondog reminiscing to Heather about how "Your mom had an amazing ass...and she could fellate like a python!" McConaughey is clearly enjoying himself playing one of the most irresponsible characters you'll ever see, though there's never any doubt he's a loving father. Heather's forgiving affection for him is genuine, though she recognizes his flaws and can hardly conceal the fact that marrying a guy like Frank is an act of rebellion (when Frank criticizes Moondog, Heather says "He's a great man...he's brilliant. You'll never be great or brilliant...but you're dependable"). Once Moondog breaks out of rehab, THE BEACH BUM becomes a series of increasingly silly vignettes, with a visit to his dolphin tour guide buddy Captain Wack (Martin Lawrence) and his coke-addicted parrot, and a trip to a party yacht with Lingerie and Buffett, who write an ode to Moondog called "Moonfog" before the cops arrive and Lingerie whisks him to a small charter plane captained by his personal pilot, an elderly rasta (Donovan St.V. Williams) with severe glaucoma. THE BEACH BUM has some genuine heart to it and there's no shortage of outrageous scenes (Minnie ripping a bong as Moondog goes down on her...while she's getting a pedicure) and quotable dialogue (Lingerie, officiating the wedding, asks Heather why she's settling down with a guy like "Limpdick" when "your pink tweeter ain't even squirted yet," which, trust me, is hilarious when said by Snoop Dogg). Sure, there isn't a whole lot to THE BEACH BUM's ramshackle structure beyond McConaughey trying to turn Moondog into his version of The Dude. It could've used more Snoop and Efron, and even at 95 minutes, it starts to wear a little thin by the end, but truthfully, I laughed quite a bit, which is more than I can say for a lot of present-day comedies. And while it's not exactly the best Matthew McConaughey performance, it's certainly the most Matthew McConaughey performance.