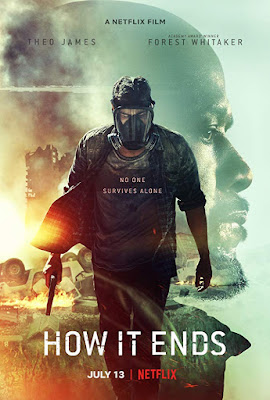 Another dud from Netflix's increasingly irrelevant movie division, HOW IT ENDS might be more accurately titled WILL IT END?, an apocalyptic slog that drags on for a long two hours before an infuriating non-ending that makes the entire endeavor look like a busted series pilot. The project was in gestation for several years, with Blake McLaren's script making the fabled "Black List" of buzzed-about but unproduced screenplays way back in 2010. Director David M. Rosenthal has a couple of acclaimed indies under his belt with JANIE JONES and A SINGLE SHOT, and he's got the remake of Adrian Lyne's JACOB'S LADDER already in the can for 2019, but HOW IT ENDS has nothing to say and offers nothing new to the end-of-the-world canon. Will (Theo James of the DIVERGENT films) is a Seattle lawyer and expectant father with his longtime girlfriend Sam (Kat Graham of THE VAMPIRE DIARIES). He's got business in Chicago and plans on staying an extra night to have dinner with Sam's parents and formally ask her stern, ex-Marine father Tom (Forest Whitaker) for his daughter's hand in marriage. Tom is a humorless, passive-aggressive asshole who still holds a grudge against Will for causing his boat to sink five years ago. As a result, dinner goes about as well as expected, with Tom instantly lashing out at Will even with his patient wife Paula (Nicole Ari Parker) telling him to lay off, with Will leaving before he even gets around to the whole marriage thing. The next morning, Will is on the phone with Sam and it cuts out, and when he's at O'Hare, the power goes out, phones are dead, and all flights are cancelled when the entire US power grid shuts down just after breaking news reports of a "seismic event" off the coast of California.

Will makes his way back to his future in-laws, where Tom is sending Paula to stay with their son before driving to Seattle to find Sam, telling Will "The only question is...are you going with me?" While not quite GUESS WHO'S COMING TO THE APOCALYPSE, it promises to be a tense road trip, especially since society has devolved into a hellscape of complete chaos and anarchy in a matter of hours (sort of like CELL, another, even worse end-of-days tale). Danger lurks at every mile marker as America suddenly makes Bartertown look like a vacation resort. They pick up a passenger with Native American mechanic Ricki (Grace Dove, who played Leonardo DiCaprio's doomed wife in THE REVENANT), but face constant obstacles, usually from assorted grizzled, DELIVERANCE-esque miscreants looking to steal gas and guns. Strange weather develops, from powerful storms to unbearable heat, with random earthquakes and birds migrating in strange formations. They're forced off of the cross-country I-90 and onto endless and ominous country roads with a dark, cloudy horizon that makes the apocalypse look like the old Simpson/Bruckheimer Films logo. 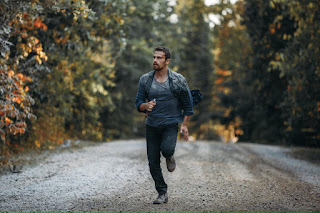 A few weeks ago, I reviewed IN DARKNESS and prematurely concluded that it would have the dumbest movie ending of 2018. I was wrong.
HOW IT ENDS doesn't explain the "how" of anything, not the least of which is how are they still trying to make Theo James happen? It just becomes a series of set pieces with rote apocalypse tropes in search of a point. It's like THE WALKING DEAD without the zombies and with...weather? Who knows? There's no hook here. Will eventually ends up making his way to the ruins of Seattle alone, and in the last 15 minutes, the filmmakers introduce Jeremiah (Mark O'Brien), a new major character who seems abruptly wedged in to serve as a third-act antagonist, apparently seeing the end of civilization as we know it as an opportunity to catch Sam on the rebound based on the assumption that Will was dead in Chicago. This is where they're taking the story?  This is what it's all leading up to? A creep with a crush on the hero's girlfriend? "We have a bond! We thought you were dead!" Jeremiah sneers, searching for a mustache to twirl. Dude, it's been six days. Which is about how long HOW IT ENDS feels, as the drive from Chicago to Seattle seems to play out in real time. Character behavior and situations are idiotic--after some guys ambush them and steal their gas cans, Will, Tom, and Ricki speed up and follow them through a raging wildfire, firing a gun at the car that's filled with the combustible gasoline they need. And marvel at how easily Tom manages to talk his way through a military roadblock just by saying "I was in the Marine Corps." Their arcs are equally ludicrous--Will has never touched a gun and is appalled by the very idea that they exist, but the next day, he's a crack shot firing out of a speeding car. Whitaker has little to do other than look pissed-off, and it comes as no surprise when he finally comes to respect Will and stop being such a hardass with him. The only remotely interesting character is Dove's Ricki, so of course, the filmmakers just have her wander off, never to be seen again. Much like HOW IT ENDS after its first weekend streaming on its way to the ever-growing scrap heap of forgettable Netflix Original films.