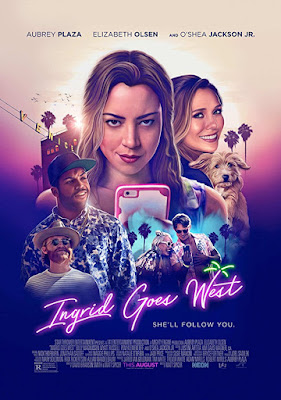 A timely and extremely uncomfortable cringe comedy take on SINGLE WHITE FEMALE for the Instagram era, INGRID GOES WEST manages to stay on course and never lose its way despite some wild shifts in tone. It's got some career-best work from PARKS AND RECREATION co-star and deadpan icon Aubrey Plaza as Ingrid Thorburn, a desperately lonely young woman introduced crashing a wedding in tears and pepper-spraying the bride, a supposed bestie who didn't even invite her. Ingrid is slapped with a restraining order and committed to a mental facility, and we soon learn the two were barely acquaintances after Ingrid commented on one of her posts and immediately began stalking her, attempting to ingratiate herself into her life in a purely one-sided friendship. Ingrid spends her days scrolling through Instagram and liking every pic she sees. She's also still mourning the recent death of her mother, and after happening upon a magazine article about trendy "social media influencer" Taylor Sloane (Elizabeth Olsen), she immediately follows her on Instagram. When Taylor responds to her comment, Ingrid cashes in her mother's $60,000 life insurance policy and impulsively moves to L.A. to find Taylor, tracking her through her posts and following her home, and as soon as Taylor and her artist husband Ezra (Wyatt Russell) step out, Ingrid lets herself in, kidnaps their dog and waits for the reward offer to call and set up a meeting. Ingrid and Taylor become fast friends, going on road trips and hitting the trendy L.A. spots, with Ingrid completely making herself over in Taylor's image and quickly growing discontented when Taylor can't devote all of her attention to her.

Things take an even darker turn with the arrival of Taylor's douchebag, drug addict brother Nicky (Billy Magnussen), who derisively refers to Ingrid as "Olga" and quickly senses that something is off about her. Ingrid also gets involved with Dan (O'Shea Jackson Jr), her Batman-obsessed landlord who's unaware of just how mentally unstable she is. Making his feature debut, director/co-writer Matt Spicer does a commendable job of keeping a sense of balance to INGRID GOES WEST. The comedy shifts from commercial to cringe to unbelievably dark in ways that would cause a less-focused filmmaker to completely drop the balls they're attempting to juggle. Spicer gets a lot of help from a fearless Plaza, who somehow manages to elicit sympathy even at Ingrid's worst moments. The sense of desperation and isolation Ingrid feels is palpable, spending all of her time alone in total silence, eyes glazed over while she stares at her phone, not even looking at what she's "liking" and retreating further away from the world with each click. As the cycle begins again with Taylor, Ingrid recognizes history repeating itself but can't stop it. This is just how she is, and the nature of social media brings out the worst of it. We never learn much about Ingrid's past and what we do learn isn't really reliable since she's a compulsive liar. Spicer and co-writer David Branson Smith find intriguing parallels between Ingrid and Taylor as well as Ingrid and Ezra, who knows Taylor better than anyone and confides in Ingrid that his wife's existence isn't what it appears to be to her Instagram followers. Spicer closes with a terrific final shot with a focus on Plaza's smiling face that leaves the resolution open-ended but hints that Ingrid is headed for some next-level crazy. The story arc gets a little predictable the longer it goes on, but for Plaza and Olsen fans and connoisseurs of cringe (it's also somewhat reminiscent of the underrated OBSERVE AND REPORT) should consider INGRID GOES WEST required viewing. (R, 98 mins) 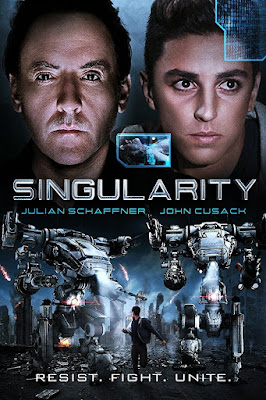 A thoroughly incoherent sci-fi hodgepodge that manages to rip off BLADE RUNNER, I ROBOT, THE MATRIX, THE HUNGER GAMES, DIVERGENT, THE TERMINATOR, and TRANSFORMERS in its first 15 minutes, SINGULARITY's behind-the-scenes story is more interesting than the film itself. The story is a jumbled mess, dealing with Kronos, an AI program designed to save Earth, but immediately deciding on its own volition that humanity isn't worth saving and promptly blowing up everything and killing billions of people. 97 years later, the world is a post-apocalyptic wasteland with small clusters of humans still existing, though we only see two: Andrew (Julian Schaffner) and Cania (Jeannine Wacker), a fearless warrior with a wardrobe provided by Katniss Everdeen. They're making their way to Aurora, a supposed safe haven where humanity will attempt to rebuild itself, but Andrew is actually an advanced synthetic lifeform so real that even he's unaware that he isn't human. Their journey is overseen from a command center inside the Kronos program, where the uploaded avatars of misanthropic Kronos designer Elias Van Dorne (John Cusack) and his flunky (Carmen Argenziano) monitor their whereabouts to discover the secret location of Aurora. Savvy moviegoers will notice something strange almost immediately and it becomes glaringly apparent with each passing appearance of Van Dorne: Cusack doesn't seem to be in the same movie as everyone else, and that's because he's not.

Remember in 1984 when Paramount desperately shoehorned newly-shot footage of red-hot Eddie Murphy into the two-years-shelved Dudley Moore comedy BEST DEFENSE?  It's a similar situation here, only with an ice-cold Cusackalypse Now. SINGULARITY began life as a very low-budget Swiss sci-fi film titled AURORA, shot way back in 2013 and never released. It was written and directed by 21-year-old Robert Kouba and starred Schaffner, Wacker, and veteran character actor Argenziano, the latter probably the biggest American name the largely Kickstarter-funded production could afford. Trailers for AURORA were posted online in 2014 and 2015 but it remained shelved until US outfit Voltage Pictures acquired it and brought Kouba and Argenziano back to shoot new scenes with Cusack in Los Angeles in 2017. With the added Cusack footage, the restructured film was rechristened SINGULARITY and dumped on VOD and on eight screens in the fall of 2017. Whatever changes Voltage had Kouba make don't appear to have helped, and there's really nothing to see here unless you want to witness the depressing sight of Cusack being Raymond Burr'd into a terrible sci-fi movie that isn't improved by his barely-there presence. There's no way he was on the set for more than a day (there's a credit for "Catering, L.A." so he at least stuck around for lunch), with his entire screen time spent in front of a greenscreen and occasionally watching four-year-old footage of Schaffner and Wacker, never once coming into contact with either of them. Throughout, Cusack looks disheveled and tired, uttering nonsense like "Yes...his code continues to evolve" in ways that would make Bruce Willis look away in pity. As a fan of old-school exploitationers, there's a part of me that's amused that these kinds of GODZILLA and Roger Corman moves still occasionally go on today (for further fun, check out 2015's BLACK NOVEMBER to see Mickey Rourke, Kim Basinger, Anne Heche, and Wyclef Jean get Raymond Burr'd into a long-shelved Nigerian-made political drama), but on the other hand: John Cusack...what the hell are you doing? There's some OK cinematography in some of AURORA's Swiss and Czech Republic location work, and the opening sequence of a neon cityscape accompanied by Vangelis-inspired synth farts courtesy of The Crystal Method's Scott Kirkland (who also wasn't involved in AURORA) might give the impression that it's a passable BLADE RUNNER riff if you're barely paying attention or you've had several beers. But in its released condition, SINGULARITY is nothing more than Cusack--once a bankable, A-list actor who could get movies made (remember HIGH FIDELITY?)--scraping bottom. What's wrong, dude? Seriously. Should we be concerned? (PG-13, 92 mins) 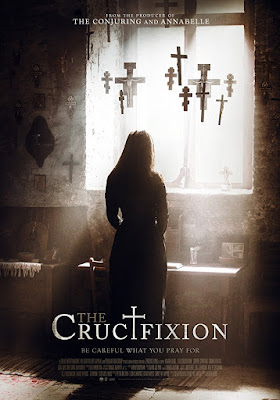 Ten years ago, director Xavier Gens made an immediate splash with genre fans for the bold and ballsy FRONTIER(S), his contribution to the wave of extreme French horror. Immediately after, he directed the Luc Besson-produced actioner HITMAN, though he was, of course, given the Hollywood welcome by being fired in post-production after clashing with Fox execs. It would be five years before he resurfaced with the dismal THE DIVIDE, a repugnant post-apocalyptic SALO knockoff that could easily have been titled LAST BOMB SHELTER ON THE LEFT. Gens directed a short segment of THE ABCs OF DEATH prior to another extended leave from the big screen, directing a few episodes of the Euro TV series CROSSING LINES before recently returning with the barely-released THE CRUCIFIXION. One of the dullest horror movies of the year and maybe the least-warranted demonic possession film since THE VATICAN TAPES, THE CRUCIFIXION is inspired by the "Tanacu Exorcism" in Romania in 2005, where a priest and four nuns were accused of murder when an exorcism on an allegedly possessed nun resulted in her death. Here, the case is investigated by fictional American journalist Nicole Rawlins (British actress Sophie Cookson, from the KINGSMAN films), a non-believer who journeys to Romania to interview jailed priest Father Dimitru (Catalin Babliuc) and the family and friends of the late Sister Adelina Maranescu (Ada Lupa) to prove God isn't real. She's haunted by calculated, predictable jump scares and loud noises and has weird sexual dreams about Father Anton (Corneliu Ulici), a young priest who worked with Father Dimitru.


That's about all that happens. THE CRUCIFIXION is one of the most relentlessly gabby films of its kind, which would be fine if the mystery was engaging or if Cookson was even remotely believable as a dogged, hard-nosed reporter. Her whole motive has to do with guilt over not accepting Christ when her mother was dying of cancer a year earlier, so of course the whole point is to convince her to believe, which would almost put this tame, tired dud firmly in faithsploitation territory if not for Nicole's erotic dreams and one lone F-bomb when she's suddenly possessed out of the blue in the last ten minutes of the film. Written by the CONJURING twin sibling duo of Chad and Carey W. Hayes in the most clumsy and cumbersome fashion possible (Nicole's editor/uncle, skeptical about her story idea, ten seconds after we're introduced to both of them: "This is just a chance for you to nail faith to the wall, and it's NOT going to bring your mother back!"), THE CRUCIFIXION is the kind of sleep-inducing trifle that evaporates from your memory while you're watching it. FRONTIER(S) is pretty badass, but between THE DIVIDE and now THE CRUCIFIXION, Gens, once hailed as a wunderkind and the horror genre's next big thing, is looking an awful lot like a one-hit wonder. (R, 90 mins)