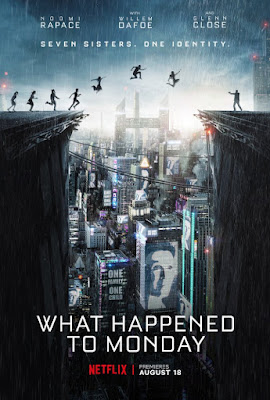 WHAT HAPPENED TO MONDAY
(France/US/Belgium - 2017)

Noomi Rapace's intensely committed performance was the only good thing about the recent sci-fi film RUPTURE, and if you were impressed by her work there, then you need to see the Netflix Original movie WHAT HAPPENED TO MONDAY, the latest from Norwegian cult director Tommy Wirkola. Wirkola, best known for his two DEAD SNOW zombie movies, is making his first English-language film since his one-off attempt at helming a Hollywood blockbuster with 2013's long-delayed, problem-plagued HANSEL & GRETEL: WITCH HUNTERS. But seven Noomi Rapaces are pretty much the whole show with WHAT HAPPENED TO MONDAY, a high-concept dystopian sci-fi thriller set in a future society where overpopulation, climate change, and worldwide drought have destroyed the agricultural system. Genetically modified crops create enough food to keep people fed, but they've also led to a spike in multiple births and genetic defects. This prompts political activist Dr. Nicolette Cayman (Glenn Close) to create the Child Allocation Act, with the slogan "One Child, One Earth." In this new Orwellian world of constant surveillance and social control, multiple births are so common that one child becomes the law of the land. The parents can keep the firstborn, but the others are placed in Cryo Sleep, a process that puts them in a state of hibernation until the world's climate, population, and food concerns are properly addressed and the world is a better and more healthy place. As stated by one TV talking head, it's not a perfect solution, but "It may give us some time." 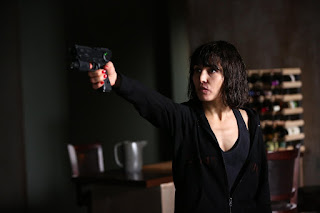 Shortly after the CAA is passed in 2043, an unmarried, single woman named Karen Settman dies giving birth to septuplets. Her doctor is a friend and notifies her estranged father Terrence (Willem Dafoe), an intellectual who's opposed to Cayman's CAA law. Terrence names each of the girls after a day of the week--Monday through Sunday--and secretly takes them home with him, reconstructing his residence as a fortress-like bunker with a secret room for his granddaughters to hide should anyone show up unannounced. As the girls grow (the septuplets at elementary school age are played by Clara Read), Terrence instructs them that in public, they are be known as "Karen Settman," and that "Karen" is to be portrayed by a different one of them on the specific day of the week for which she's named. This requires nightly meetings to keep up the ruse, but it's the only way for Terrence to get the girls acclimated to the outside world without exposing them, though their developing personalities make things difficult, especially when rebellious Thursday sneaks out of the house on a Saturday and disappears for several hours, returning home after losing the tip of her right index finger in a skateboarding accident. Of course, in the increasingly insane context of WHAT HAPPENED TO MONDAY, this requires Terrence to slice off the right index fingertip of the other six girls in order to maintain the illusion of "Karen Settman."  Yes, it's that kind of movie. 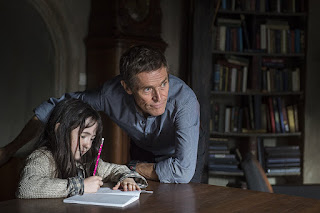 Flash forward to 2073, and Terrence's absence at this point indicates he's passed on during the narrative jump. Karen Settman has a good job at a financial institution and the seven siblings still live together and still have nightly meetings going over every aspect of their day. After 30 years of this, bickering is common and resentment is setting in as each wants their own life outside of being "Karen Settman." Being the oldest, Monday is the de facto "leader" of the septuplets, and each one has, not surprisingly, developed their own distinct personalities--Saturday is the blonde party girl, Friday is the mousy, wallflower computer nerd, Thursday is a short-haired, masculine tough girl. Monday doesn't return home from work one Monday, and when Tuesday goes about "Karen"'s day on Tuesday, she's hauled into the Child Allocation Act headquarters, where agents have obviously been tipped off by someone that she's one of seven, also hinting that they've got Monday in custody. Before long, Wednesday through Sunday are evading government assassins, dealing with a secret Monday paramour (Marwan Kenzari), and uncovering evidence that one of them may have sold the others out to Cayman, who's about to launch a Presidential campaign based on her successful handling of the world's overpopulation, which itself leads to a labyrinthine conspiracy to bury some horrible secrets. 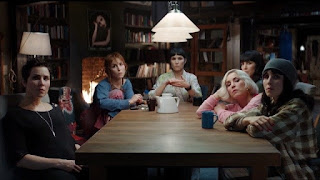 WHAT HAPPENED TO MONDAY gets a little too muddled for its own good as it goes on, especially when it comes to the exact intent of one of the main characters, but its imaginatively goofy premise, the seamless visual trickery of seven Rapaces interacting with one another, the effectively cold, dystopian, CHILDREN OF MEN atmosphere (this was shot in Romania), the hyperviolent  DREDD-level splatter of the shootouts, the BOURNE-esque intensity of the action sequences, and the way Rapace vividly brings all seven sisters to life in distinct ways makes this far more entertaining than you might expect. Ten years ago, this would've been a huge summer movie that probably would've been directed by Ridley or Tony Scott, but as it stands today, it's one of the better Netflix Originals to come down the pike in a while, even if the story sort-of loses itself near the end and it might leave you wanting more in terms of the scenes with Terrence. I don't know about you, but when Wirkola skips from Terrence looking at his newborn granddaughters to all of them being seven years old, I kinda wanted to see Grandpa Willem handling seven screaming babies or watching him navigate the Terrible Twos. It's a totalitarian society with cameras and scanners everywhere--didn't anyone notice him buying a lot of diapers? Did his neighbors not hear anything? WHAT HAPPENED TO MONDAY runs 124 minutes and yet it still feels like it's been cut down, especially when it comes to Dafoe's character, and if you're aware that Robert Wagner had his entire role cut from the finished film (he's still listed in the credits on IMDb, and there's also a publicity still of him with Close). It's got some hiccups in the second half and can't stand up under any serious scrutiny, but if you don't ask questions and just roll with the craziness, WHAT HAPPENED TO MONDAY is an engagingly batshit blast that's certain to become a word-of-mouth hit for Netflix viewers very soon.