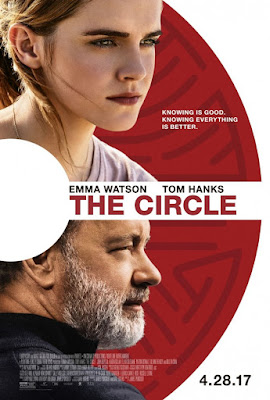 Based on the 2013 novel by Dave Eggers, who shares screenplay credit with director James Ponsoldt (THE SPECTACULAR NOW), THE CIRCLE has a premise with such a short window of topicality that the movie adaptation feels dated just four years later. It doesn't help that TV shows like MR. ROBOT and BLACK MIRROR have already explored similar themes much more effectively, but THE CIRCLE loses the satirical elements of Eggers' novel and opts for a much more heavy-handed approach. What might've worked on the page doesn't work always work on the screen, as characters here don't have conversations as much as they drop exposition and make important speeches. Everything has to be simplified so the audience can stay caught up, then it starts glossing over things so much that the entire second half of the film is a complete mess. A lot of this was likely due to negative test screenings leading to extensive reshoots being done in January 2017, just three months before the film's release and long after filming wrapped in late 2015. The film goes in a completely different direction than the book, so much so that it's a safe assumption that the finished film isn't exactly a collaborative effort between Eggers and Ponsoldt. 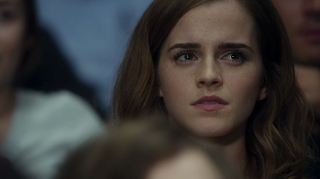 Mae Holland (Emma Watson) is temping in customer service at the local water department when her Scottish college friend Annie (Karen Gillan) lands her an interview with her employer, The Circle. A Google-like tech empire in Silicon Valley, The Circle is always pioneering advances in social media and software dedicated to making people "connected." Their latest product launch involves "SeeChange," a tiny, round camera that can be placed anywhere and go unnoticed, utilizing GPS and facial recognition software and generating much in the way of moral and ethical dilemmas over privacy and surveillance. Circle founder and CEO Eamon Bailey (Tom Hanks) claims that such advances are for the greater good of humanity, but loner Mae's gut reaction is one of apprehension. The mostly millennial employees base their lives around The Circle, living in dorm-like apartments "on campus," and participating in "suggested" activities on their off time with a fervent and almost cult-like devotion to their employer. Mae is passive-aggressively reprimanded by a Circle social media adviser for not taking part in the events and for going home to visit her parents--mom Bonnie (Glenne Headly) and dad Vinnie (the late Bill Paxton in his last film)--and she's somewhat alarmed that The Circle already knows her father is suffering from multiple sclerosis. Mae is chastised for taking a job with The Circle by her childhood friend Mercer (Ellar Coltrane of BOYHOOD), who hates texting and the internet and has no doubt condescendingly uttered, at least once in his life, "I don't even own a TV." Her friendship with Mercer falls apart after she shares a pic of his custom-made antler chandeliers and outraged millennials start following him around to harass him get in his face, and shout "deer killer!" After an incident involving her trespassing to go kayaking ends with her being rescued after being seen on a SeeChange camera aimed at the bay, Mae makes the ultimate commitment to The Circle: she goes "transparent," wearing a small camera 24/7 to document every moment of her life for Circle's 240 million members. This plot turn could've been a great BLACK MIRROR episode in the hands of Charlie Brooker, and it also recalls both Bertrand Tavernier's remarkably ahead-of-its-time cult film DEATH WATCH (1980) as well as Peter Weir's THE TRUMAN SHOW (1998), but once Circler comments turn up on the screen for most of the remainder of the film, it more or less starts to look like INSTAGRAM: THE MOVIE. 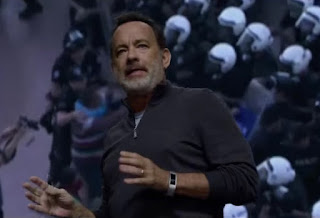 Mae's advance up the ladder at The Circle puts a strain on her friendship with Annie as well as her relationship with her parents, who are also required to install cameras at their house. Those cameras are taken offline when Mae's followers, seeing what Mae sees, accidentally catch a glimpse of her parents having sex with the aid of a penis pump for her disabled father, humiliating both of them. Mae also forms a muddled alliance with Ty Lavitte (John Boyega of STAR WARS: THE FORCE AWAKENS), a legendary hacker who works for The Circle, designing a program that's been hijacked by Bailey and his business partner Tom Stenton (Patton Oswalt) to spy on every Circle user and store all of their personal information, phone calls, e-mails, texts, etc. Much to Lavitte's disgust, Bailey and Stenton use this information to blackmail a senator (Eve Gordon) who's been publicly critical of The Circle, and with Mae's help, they even concoct a plan to tie The Circle into voter registration records and not only allow users to vote through their Circle account, but require them to be Circle users in order to vote ("The US government needs us more than we need them," Stenton says). There's some heady implications in a lot of what goes on in THE CIRCLE, especially the ultimate fate of Mercer as a scathing critique of social media hysteria, but Ponsoldt bungles it at every turn. THE CIRCLE is content to lecture the audience and too often comes off like it's taking an approach to technology that's equal parts Stubborn Luddite and Scared Old Man. What could've been a smart, topical critique of our reliance on technology and our willingness to sacrifice privacy and human interaction for convenience and a feeling of connection with the rest of the world comes off as smug and sanctimonious, complete with a laughably simplistic non-ending that has Mae staging a revolt against Bailey and Stenton and literally Pied Pipering her newly-woke colleagues out of a darkened, pitch black auditorium through an exit door, outside into the light. Watson is a capable actress but she's strangely one-note here. Boyega seems to have been affected most by the reshoots, looking like he spent his entire time on the set unsuccessfully trying to locate Ponsoldt, while Paxton musters what trace amounts of dignity he can with a penis pump and in another scene that requires him to piss himself. What little novelty this misfire offers comes from seeing Hanks and Oswalt atypically cast as quietly sinister villains, but neither seems to have spent more than a few days working on this, enough for one to surmise that when Bailey turns to Stenton at the end and says "We are so fucked," it's very possible that it was just Hanks talking to Oswalt without knowing the cameras were rolling. Altered extensively from Eggers' novel, THE CIRCLE is disjointed, already past its sell-by date, and completely unsure of what point its even trying to make.