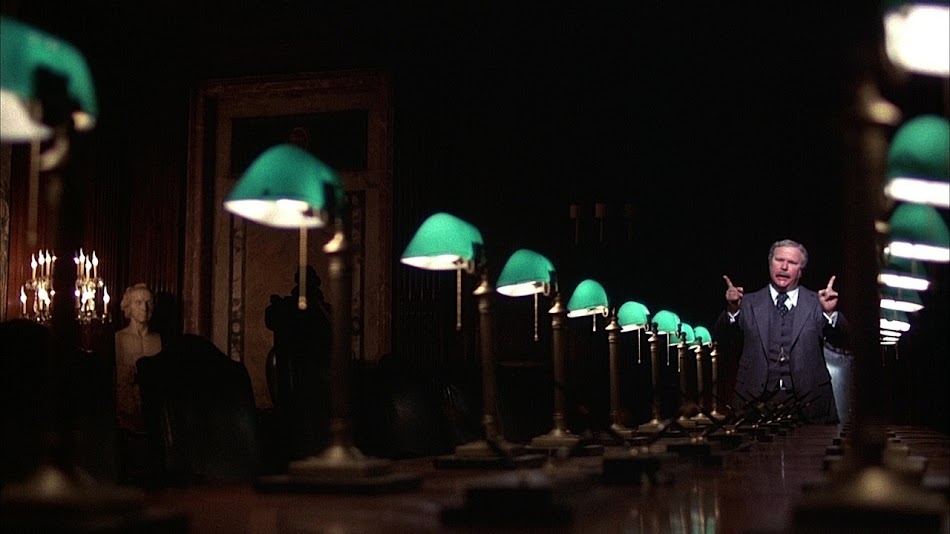 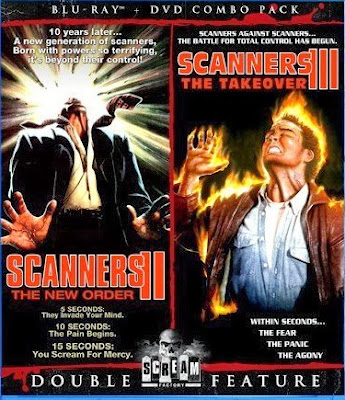 Ten years after David Cronenberg's 1981 classic SCANNERS, his former producer Pierre David got the ball rolling on two back-to-back-shot sequels that have fallen into relative obscurity until the recent release of a double feature Blu-ray/DVD combo set.  By 1991, Cronenberg was well on his way to becoming a respected filmmaker (he had NAKED LUNCH in theaters that same year) and had nothing to do with these sequels other than a "Based on characters created by" credit and presumably cashing a small paycheck.  Both films were directed by Christian Duguay, and while he's not a filmmaker of Cronenberg's caliber, he did exhibit enough flair to eventually go on to a brief career with the major studios and has a few solid cult movies to his credit.  The Canadian Duguay got his start as a camera and Steadicam operator on films like Paul Mazursky's ENEMIES: A LOVE STORY (1989) and worked in Canadian TV before making his feature directing debut with these two SCANNERS sequels. 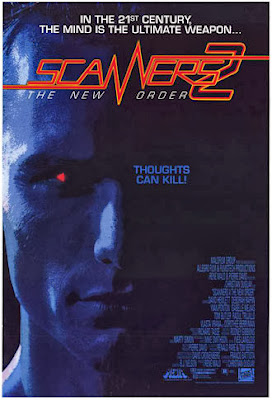 Aside from some mild profanity and the rather tame splatter bits--the exploding heads aren't nearly as well-done here as in Cronenberg's film--SCANNERS II could almost be a TV-movie.  Taking place ten years after the events of the first film--though the math doesn't make sense once the entire plot is revealed--SCANNERS II focuses on David Kellum (David Hewlett), a veterinary student with Scanner abilities who gets roped into the devious machinations of Commander Forrester (Yvan Ponton), a fascist police official with designs on turning the city into his totalitarian playland.  Forrester and Dr. Morse (Tom Butler) run a secret Scanner lab where Forrester's ultimate plan is to corral the telepathic Scanners and use them to expose, control, and eliminate the criminal element.  Kellum also finds out he has a long-lost sister, Julie Vale (Deborah Raffin) and that they're both the Scanner-gene-carrying offspring of Cameron Vale and Kim Obrist, the characters played by Stephen Lack and Jennifer O'Neill in the 1981 film.  SCANNERS II largely follows the same formula as the first film, right down to an inevitable showdown between good Scanner David and evil Scanner Drak (Raoul Trujillo), who's essentially a stand-in for Michael Ironside's Darryl Revok.  Written by B.J. Nelson (LONE WOLF MCQUADE), SCANNERS II basically is what it is:  a watchable, straight-to-video-level sequel, even though it did get a limited US theatrical release in the summer of 1991 before turning up on video store shelves.  Hewlett, a regular presence in Canadian film and TV who would go on to become a fixture in the films of CUBE director Vincenzo Natali, is pretty bland here but does sport a sublime mullet.  American actress Raffin, whose career was starting to slow down by 1991 even though she was still in her late 30s, gets second billing but doesn't appear until over an hour into the film and has little to do other than show David a couple of new Scanning techniques.  That's a shame since the late actress (she died of leukemia in 2012) was a consistently appealing TV and big-screen presence who rarely got the quality roles she deserved (cult movie fans probably know her best today as Charles Bronson's doomed love interest in DEATH WISH 3).  Many of the Quebec-based cast, especially Ponton, sound dubbed, but the real standout is a scenery-chewing Trujillo as Drak, who seems to have spent a significant amount of time studying Ironside's performance and trying to top it at every turn.  Other than Trujillo's level of commitment to crazy, SCANNERS II is harmless but mostly forgettable.  In addition to a required-by-Canadian-law appearance by character actor Vlasta Vrana, the film also features an Aldo Nova-written hair metal closing credits tune, "Mind to Mind," performed by Alan Jordan, that probably could've been a hit had anyone saw the movie.  (R, 104 minutes) 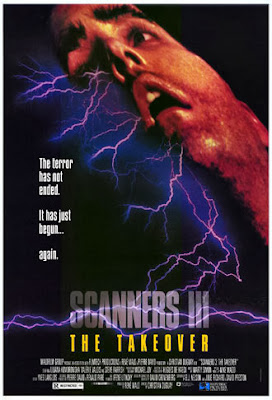 Ditching Roman numerals for this second sequel, Duguay's SCANNERS 3 is generally considered the low point of the trilogy, but it might be time to reconsider that.  While neither film comes close to approaching Cronenberg's film--and to their credit, they don't even try--SCANNERS II generally felt like a watered-down redux.  SCANNERS 3, on the other hand and as misguided as it may be, goes for camp and comedy throughout and proves to be quite entertaining if you just shrug your shoulders and accept it.  Once more, we have a good Scanner (Steve Parrish as Alex) taking on an evil Scanner (Liliana Komorowska as Helena).  They're siblings and Alex is in self-imposed exile in Tibet after showing off some Scanner party tricks and accidentally killing his best friend.  Helena, meanwhile, is meek and mousy until she gets a dose of her scientist father's (Colin Fox) experimental new Scanner drug, which basically turns her into a fire-breathing bitch-on-wheels, strutting, vamping, and cooing across the screen as she offs her nemeses, assembles a Scanner army (the film was titled SCANNER FORCE in the UK), and discovers she can control the thoughts and minds of the population through TV signals (which also allows Duguay to pay tribute to Cronenberg's VIDEODROME).  While Parrish is a hero so bland that he makes you long for the dynamic magnetism of 1991 David Hewlett, Komorowska (who married Duguay not long after making this) just lets it rip.  It's not a good performance by the general definition of "good," but there's no denying her enthusiasm.  It's almost as if she treated this entire film as a potential demo reel to audition for an over-the-top 007 femme fatale.  Nelson is one of three credited writers for this one, along with David Preston (SPACEHUNTER: ADVENTURES IN THE FORBIDDEN ZONE, THE VINDICATOR) and Julie Richard, so it's hard to tell where this film's campy direction originated, but there's a clear attempt made to make Helena the quippy, snappy Freddy Krueger of the SCANNERS series, especially when Komorowska animatedly declares "I had a headache THIS big!"  There's also a scene in a posh restaurant where she telepathically forces an asshole business exec (Peter Wright) to spill wine on himself and foolishly dance around that seems more fitting in a Jim Carrey movie than in a SCANNERS film.  So, while the shift toward comedy is dubious, SCANNERS 3: THE TAKEOVER shows off much more gore and at least has more of a personality than its predecessor, with Komorowska turning in an undeniably spirited performance that's really hard to dislike.  If you catch this in the right mood, you might find yourself having an unexpectedly good time with it.  This one never made it into US theaters, instead going straight to American video stores.  (R, 100 mins)

Presented in a Blu-ray/DVD combo pack by Shout! Factory offshoot Scream Factory, the SCANNERS II/SCANNERS 3 set (both films are on one Blu-ray and one DVD) isn't exactly Blu-ray demo-worthy but look nice in 1.78 transfers.  The biggest downside of the set is that it contains zero extras, not even trailers.  An interview with Duguay would've been a nice bonus feature (if for no other reason than to discuss the shift in tone with SCANNERS 3).  Duguay (born in 1959) went on to make the 1992 pre-007 Pierce Brosnan thriller LIVE WIRE before getting some acclaim in sci-fi/horror circles with 1995's SCREAMERS.  His best film is probably 1997's Carlos the Jackal-inspired THE ASSIGNMENT (with Aidan Quinn, Donald Sutherland, and Ben Kingsley), which didn't get much attention when it was released but has a small cult following thanks to its many years as a 3:00 am insomniac cable staple (check one of the lower-profile HBO or Showtime channels; it's probably on tonight).  Duguay's most widely-seen film is 2000's THE ART OF WAR, one of Wesley Snipes' better efforts from the bygone era when Wesley Snipes movies played in theaters.  After 2002's box office dud EXTREME OPS, Duguay left the major studios behind and settled into TV movies like 2008's COCO CHANEL with Shirley MacLaine.  In recent years, he's been busy directing movies and miniseries for Italian TV.  After the well-done SCREAMERS, it looked as if Duguay might've gone on to become a go-to Hollywood journeyman of the old Richard Fleischer sort to name just one, but in a changing cinematic environment, perhaps it just wasn't meant to be.  I always thought he'd have a bigger career than the one that's panned out for him.  Just on the basis of some spectacular action sequences in SCANNERS 3, there's no shortage of genre films of the last decade that could've been made better by the professional craftsmanship of an experienced vet like Duguay. 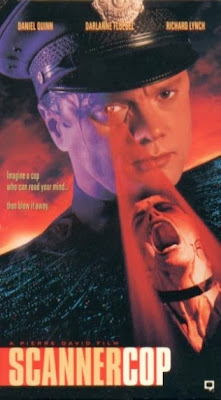 Duguay moved on to bigger things, but the SCANNERS franchise didn't end with this trilogy.  Pierre David himself directed 1994's spinoff SCANNER COP (featuring the late, great Richard Lynch), which was followed by 1995's SCANNER COP II, which was retitled SCANNERS: THE SHOWDOWN for American video stores (and it co-starred Robert Forster!).  A remake of Cronenberg's original film was announced in 2007, with SAW II/III and REPO: THE GENETIC OPERA director Darren Lynn Bousman attached, but the project fell apart.  There was also talk of a SCANNERS TV series around 2011, but thus far, nothing has materialized. 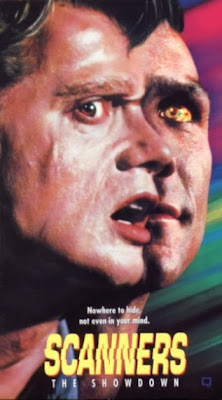