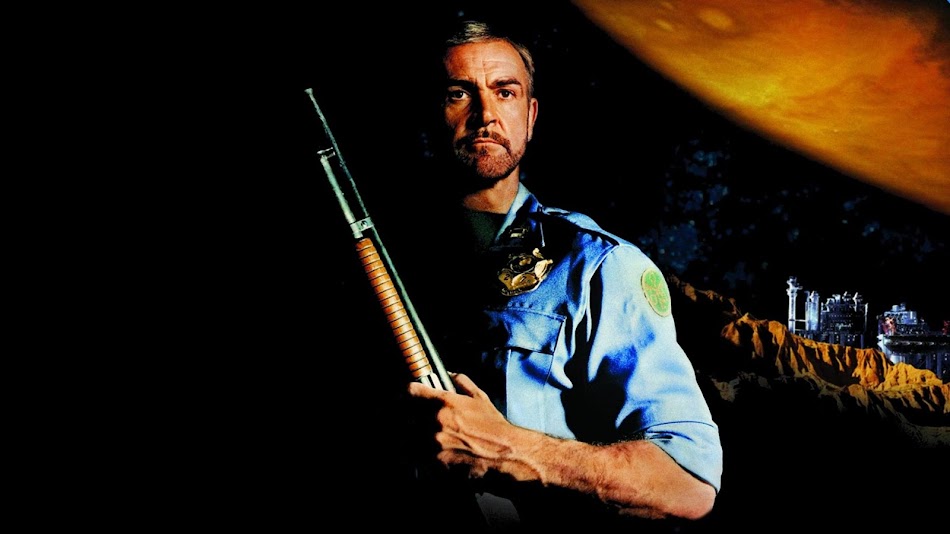 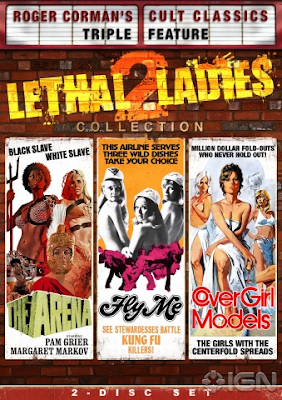 LETHAL LADIES COLLECTION 2 is the latest in Shout Factory's impressive "Roger Corman's Cult Classics" line, focusing on Corman's work as a producer/distributor with his New World Pictures in the 1970s and Concorde in the 1980s.  While Vol. 2 doesn't reach the delirious heights of LETHAL LADIES 1's TNT JACKSON ("She'll put you in traction!") and FIRECRACKER, there's still plenty of drive-in action and skin to keep any exploitation fan satisfied. 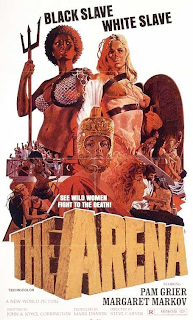 The first film in the set is easily the best.  THE ARENA (aka NAKED WARRIORS) is a sort of ancient Rome/feminist take on SPARTACUS with a bit of THE DEFIANT ONES as a band of sexy slave girls, led by Margaret Markov and Pam Grier, become female gladiators and lead a revolt against the asshole men in charge.  Corman co-financed THE ARENA with Rome-based American actor/producer Mark Damon, and supplied the stars (Markov and Grier both had a recent hit with 1973's BLACK MAMA, WHITE MAMA), the script, and director Steve Carver, and Damon supplied the Italian crew and Italian supporting cast.  So there's an interesting mix of talent in front of and behind the camera:  co-stars Paul Muller, Rosalba Neri, Lucretia Love, Salvatore Baccaro, and Vassili Karis, composer Francesco De Masi and cinematographer Aristide Massaccesi (aka Joe D'Amato) are no strangers to fans of Eurotrash cult movies, nor are the familiar voices dubbing the cast (Italian films of the time were shot without direct sound, requiring post-production dubbing, and the perpetually miserly Corman didn't want to pay to have Markov and Grier fly back to Rome to record their dialogue, so Grier and Markov are both dubbed).  Carver, a veteran second-unit director for Corman, was given his first shot at directing here, and when THE ARENA proved successful at grindhouses and drive-ins, Corman rewarded him by giving him the same year's BIG BAD MAMA, which was one of New World's biggest hits.  THE ARENA is presented in a nice 2.35:1 transfer and is filled with special features: Carver supplies a director's commentary, and is seen in a retrospective doc that also features Corman, and Damon & Markov, who met on the set on THE ARENA and have been married since. (R, 82 mins) 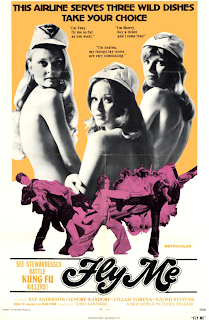 Cirio H. Santiago's FLY ME is filled with the Filipino exploitation auteur's usual touches:  gratuitous T&A, terrible acting, inept action sequences, a near-total disregard for continuity, and US-shot inserts that are far more entertaining than the stuff he himself filmed.  In this case, Corman had a young Jonathan Demme shoot additional action sequences in L.A.  Nowhere is this more apparent than in a scene taking place in Tokyo...with the Hollywood sign visible in the distance.  The threadbare plot involves the escapades of three stewardesses (Pat Anderson, Lenore Kasdorf, Lyllah Torena) in the Far East.  A badly-jumbled mix of action, kung-fu, sexploitation, grim sex-trade drama, and broad comedy, FLY ME runs just 72 minutes but feels twice as long.  The worst element is Anderson's overprotective Italian-American mother (Naomi Stevens), who tags along on her daughter's flight and keeps cockblocking a doctor's (Richard Young) attempts to get in Anderson's pants, and shouting "Mamma mia!" at the slightest provocation.  Features Santiago fixtures Vic Diaz and Ken Metcalfe, as well as the venerable Dick Miller as a cabbie in one of the L.A.-shot scenes. The print is 1.78:1 and pretty beat up, but why would you want it any other way?  FLY ME is bad, but it's a fun bad, and no doubt served its purpose at drive-ins with the window speakers cranked in 1973:  something to drown out the noise of couples screwing in their cars. (R, 72 mins) 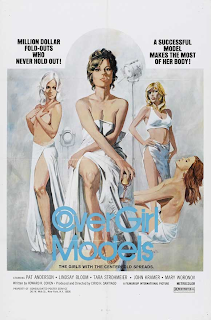 Santiago again, and this is a bit more entertaining than FLY ME.  Three women again, this time models (Pat Anderson again, plus Lindsay Bloom and Tara Strohmeier) getting involved in espionage after a microfilm is sewn into one of their dresses while on a photo shoot in Hong Kong.  It's all an excuse for inept kung-fu and nudity, so on those terms, it's a success.  The plot is confusing as hell and I doubt Santiago or screenwriter Howard R. Cohen know (or care) what's going on.  The leads are lot more likable in this one (though Anderson was also appealing and maybe the best thing about FLY ME) and a lot of the humor is legitimately amusing.  Plus, this only feels about one and a half times longer than its 73-minute run time.  Features the ubiquitous Vic Diaz and Ken Metcalfe yet again.  The transfer is 1.78:1 and not as battered as FLY ME, but pretty close. (R, 73 mins)
Posted by Mark at 1:03 AM