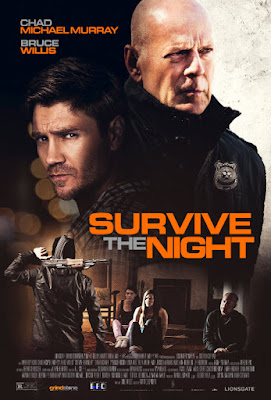 And there it is. "He went to get help." It takes longer than usual--about 45 minutes--for Bruce Willis to find his way out of SURVIVE THE NIGHT, the latest installment in Lionsgate's landmark "Bruce Willis Phones In His Performance From His Hotel Room" series. Of course, it's premiering exclusively on VOD, with the COVID-19 novel coronavirus preventing this newest entry from making its standard simultaneous ten-screen, one-to-two-showings per day theatrical bow. But other than that, it's business as usual for Willis who, even before it became a matter of public health, has long been a practitioner of socially distancing himself from the co-stars and plots of movies he's actually in. To his credit, Willis, reuniting with director Matt Eskandari after their TRAUMA CENTER triumph, is onscreen quite a bit in SURVIVE THE NIGHT, but he frequently appears visibly inconvenienced and couldn't appear less invested in the proceedings. It's a DESPERATE HOURS home invasion scenario minus any sense of suspense, urgency, or even light, as it takes place in almost total darkness, with two sibling fugitives--violent psycho Jamie (Shea Buckner) and somewhat more rational Matthias (Tyler Jon Olson)--on the run and, as typically happens, only making things worse for themselves. Jamie impulsively decides to start shooting in a carryout, killing a hostage and starting a skirmish that ends up with Matthias getting hit in the leg, opening his femoral artery. Traveling the back roads, they find the "Country Clinic" is closed, so they decide to follow doctor Rich (Chad Michael Murray) back to his home. 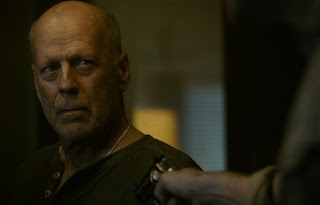 But Rich has fallen on hard times. Once an up-and-coming surgeon, he was bankrupted by a malpractice suit and only got the job at the Country Clinic through an old friend who wants to give him a second chance. So along with his resentful wife Jan (Lydia Hull) and daughter Riley (Riley Wolfe Rach), he's moved back to his childhood home in rural Georgia. That's fine with Rich's mom Rachel (Jessica Abrams), but it's a sore point with his retired sheriff dad Frank (Willis), who can't believe he caved to the lawsuit and has always regarded his brainy son as a loser with no fight in him. Rich gets to prove his dad wrong when the brothers break into the house in the middle of the night demanding Rich operate on Matthias' leg and stop him from bleeding out. Of course, the plan instantly goes to shit since Jamie can't stop himself from killing somebody, in this case Rachel, who he apparently stabs though it's hard to tell how it all goes down since the scene is so darkly shot and awkwardly cut. Insisting "We're not here to hurt anyone!" approximately ten seconds after stabbing the family's matriarch to death, Jamie ends up tying everyone to chairs and forcing Rich to operate using basic household tools, though Murray doesn't do a very convincing job of selling it (slices open the leg, a couple snips, a clamp, and he says "It's done" after a few seconds and some perfunctory grimaces). But before he can sew the gaping incision, hardass Frank takes action, attacking Jamie with a scalpel and getting stabbed in the gut himself, with Rich eventually getting shot in the shoulder in the ensuing melee. 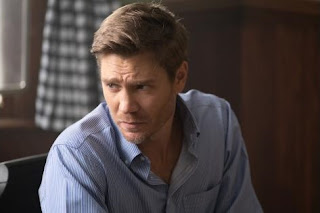 At this point, Frank takes off and hides in the woods, plotting his next move. It's here that Willis does his most emoting, grunting, crying, and even howling at the moon before taking a short sabbatical and returning for the climax. SURVIVE THE NIGHT is pretty repetitive, with various dumb circumstances repeatedly forcing people to run around the house or go outside only to end up back inside, a sure sign that Eskandari and screenwriter Doug Wolfe really don't have anything here and are just padding the job to get to an acceptable 90-minute length. And isn't there a manhunt for these clowns? Where are the cops? Performances range from apathetic (Murray) to terrible (Buckner), with Willis falling somewhere in the middle. He's a little more present than you'd expect, and his regular double is noticeable only fleetingly when Frank runs into the woods after a pointless car chase around the property (?). There's no character development of any kind and the arcs are totally predictable. Of course, father and son will iron out their differences and Frank will finally respect Rich and apologize for being such an asshole his whole life ("I want you to know that I was always proud of you!"). SURVIVE THE NIGHT is utterly inessential even by VOD-era Willis standards, but it's not the worst he's done. Still, if Chad Michael Murray can't even be bothered to give a shit, then why would Bruce?