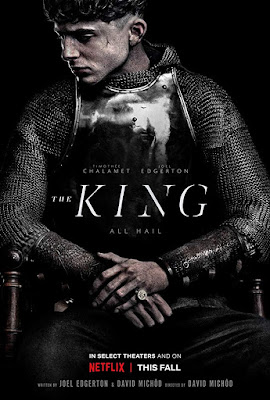 A revisionist, GAME OF THRONES-inspired take on three plays in Shakespeare's 15th century-set Henriad (Henry IV Part I, Henry IV Part II, and Henry V), THE KING eschews the Bard's prose in favor of straightforward dialogue scripted by director David Michod (ANIMAL KINGDOM, THE ROVER), and co-star Joel Edgerton. Edgerton takes the role of Falstaff, and the character as presented here is notably different from past HENRY V incarnations in the 1944 Laurence Oliver and 1989 Kenneth Branagh films, and particularly the gold standard that is Orson Welles in his own 1966 masterpiece CHIMES AT MIDNIGHT, which made Falstaff the central character. In Shakespeare, Falstaff, the bad influence, rough-around-the-edges guardian-turned-best friend of King Henry IV's wayward son Prince Hal, is rejected and left heartbroken by his beloved young charge upon his ascension to the throne. In the Michod/Edgerton take, Falstaff is left adrift on his own until his services are needed by the newly-crowned King Henry V (CALL ME BY YOUR NAME's Timothee Chalamet), who neither forgot nor abandoned his friend but essentially has too much going on to immediately touch base with him. 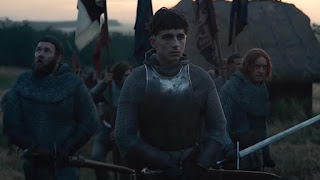 Prior to becoming king, Prince Hal enjoyed his hedonistic, hard-partying lifestyle with Falstaff and their miscreant friends. Hal is only summoned to the palace to be informed by his gravely ill father Henry IV (Ben Mendelsohn) that he's being passed over upon his death in favor of his younger brother Thomas (Dean-Charles Chapman), described by the king as "weak but eager." As Thomas prepares to head into battle against the forces of rebellious Hotspur (Tom Glynn-Carney), he's joined by a reluctant Hal, who ends up the hero of the day after killing Hotspur in a duel when the latter refuses to acknowledge the second-born son. Enraged that Hal got all the attention, Thomas moves forward to another battle and is killed, forcing Hal to inherit a throne he never wanted when his father dies soon after. Now crowned Henry V, the former Prince Hal vows to be a different king, initially insisting on withdrawing from all of his father's petty conflicts, despite the constant push for battle by some of his close advisers, including a relentlessly warmongering Archbishop of Canterbury (Andrew Havill). All the while, the young king is given guidance by his father's right hand, William Gascoigne (Sean Harris), and finds himself in an escalated conflict with France after King Charles VI's loathsome son The Dauphin (a scene-stealing Robert Pattinson) sends him an emasculating gift of a lone ball in honor of his coronation. Soon, an assassin is sent to off Henry V in collaboration with two traitors from his inner circle, prompting him to have them beheaded, followed soon after by inviting his oldest and most trusted friend Falstaff into the fray as they prepare to face King Charles' Dauphin-led army at the Battle of Agincourt. 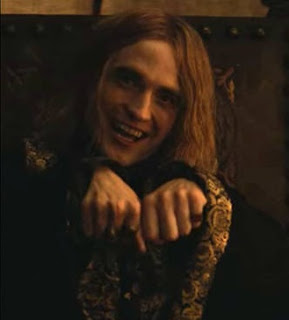 The cutthroat royal machinations are pretty familiar as far as these things go, and it's really a long buildup to Michod staging an epic, bloody, mud-soaked Battle of Agincourt in the third act. The friendship between Falstaff and Hal isn't explored to quite the depth that it was by Welles and his co-star Keith Baxter in CHIMES AT MIDNIGHT, and nothing here has the emotional gut-punch of the Welles film because the devastating rejection of Falstaff--when Baxter's Hal cruelly turns his back on him when he happily arrives for the coronation--never happens here. Co-produced by Brad Pitt, THE KING is well-made, well-acted, and looks great, but it doesn't really justify its existence beyond being a two-plus hour diversion that's sufficiently engrossing while you're watching it, but doesn't really stick with you when it's over. That is, unless you count Pattinson's insane performance as The Dauphin, where he manages to channel Klaus Kinski in AGUIRRE, Mickey Rourke in BARFLY, and Gary Oldman in THE PROFESSIONAL, then wraps it all in a French accent straight out of Pepe Le Pew. Portraying The Dauphin like some kind of flamboyant, medieval Batman villain, Pattinson doesn't show up until 75 minutes in, but after one condescending dressing-down of Henry V, you'll wish Michod would immediately get busy giving him his own Dauphin spinoff movie.
Posted by Mark at 8:11 AM