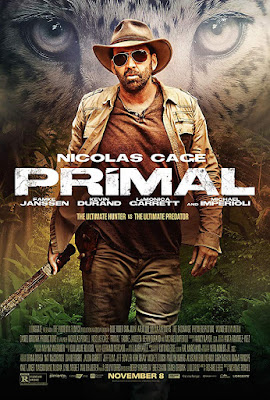 Nicolas Cage continues to squander the potential Cageassaince that last year's MANDY quite erroneously portended with what feels like his 17th straight-to-VOD effort this year, PRIMAL, dropping the same week that trailers for another two upcoming Cage movies went online. With Cage battling an escaped lunatic and a bunch of wild animals set loose on a cargo ship, the Puerto Rico-shot PRIMAL sounds like the kind of high-concept hit the actor would've made for Jerry Bruckheimer two decades ago, with a no-expense-spared budget, a top-notch supporting cast, and a solid genre craftsman like Renny Harlin, Stephen Hopkins, or Simon West at the helm. But PRIMAL has none of that other than the always-slumming Cage, reunited with his OUTCAST director Nicholas Powell, who, like his leading man, had his best days a generation ago, back when he was a stuntman and stunt coordinator on blockbusters like BATMAN, BRAVEHEART, GOLDENEYE, GLADIATOR, and THE BOURNE IDENTITY. 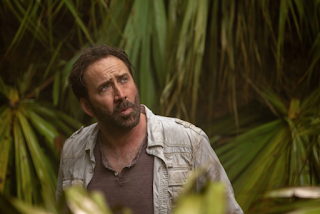 Opening with a shot of a rotting goat carcass that also serves as an inadvertent metaphor for the current state of Cage's career, PRIMAL has the LEAVING LAS VEGAS Oscar-winner as big-game hunter Frank Walsh, who's in the Brazilian rain forest where he's just captured "La Gato Fantasma," an elusive, mythical "ghost jaguar" that the superstitious locals call a "white devil." He's got a contract to deliver it to a Madrid zoo for a huge payday, and he's also caught some various other beasts of the jungle--some spider monkeys, toucans, and a few extremely venomous snakes--for some smaller side payouts. Commissioning the Mexican cargo ship Mimer Brando, he's about to set sail with his hired crew until the ship is commandeered by US marshals and a black ops team led by Ringer (LaMonica Garrett) under the supervision of US attorney Freed (Michael Imperioli) and US Naval officer and neurologist Dr. Ellen Taylor (Famke Janssen). They're transporting rogue Special Forces officer-turned-international assassin, mercenary-for-hire, and indestructible madman Richard Loffler (Kevin Durand), who was caught in South America and is being taken back to the States to stand trial. Loffler has a brain condition that makes him prone to seizures, and of course, he fakes one to get out of his makeshift holding cell. And of course, after killing the two guards on duty, he lets all the wild animals loose, forcing Walsh and everyone else to contend with crazed spider monkeys, poisonous snakes that could be hiding anywhere, and a pissed-off jaguar created with the best CGI that 1995 had to offer, not to mention Loffler, who starts methodically offing them one by one. 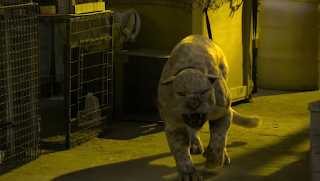 This CON AIR/SNAKES ON A PLANE mash-up sounds so foolproof that you almost have to tank it on purpose. How can PRIMAL possibly be this boring? Maybe a better director would've helped, as Powell brings no energy or style to the table, and even a couple of fight scenes are unexciting and incoherently-edited in that shaky-cam style that was all the rage a decade ago. For such an unstoppable killing machine, Durand is pretty dull, and something like this needs a hammy, scenery-chewing John Malkovich as "Cyrus the Virus." It also needs a hero more engaged than Cage, who's on total autopilot here. No outbursts, no meltdowns for the Nic Cage YouTube highlight reel--just some inconsistent beard continuity, a lot of cocky swagger ("Is that all ya got?" he sneers as Loffler is beating the living shit out of him), and some 100% chemistry-free banter with Janssen, who appears to be actively contemptuous of the material. Cage can still summon his mojo when he gives a shit, but those glorious occasions are happening with much less frequency. You know he's just not feeling it when he allows himself to be out-acted by a wisecracking macaw named Einstein.