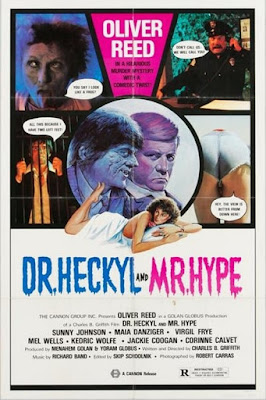 Though it sports the credit "Screenplay by Charles B. Griffith...with apologies to Robert Louis Stevenson," that pre-emptive mea culpa doesn't begin to atone for DR. HECKYL & MR. HYPE, an astonishingly unfunny comedy/horror knockoff of THE NUTTY PROFESSOR and probably the worst film of Oliver Reed's career. Just out on Blu-ray from Scorpion (because physical media is dead), it was also directed by Griffith (1930-2007), a longtime associate of Roger Corman's going back to 1956's GUNSLINGER. Griffith's place in cult movie history is secure thanks to his screenplay credits on two early Corman classics--1959's A BUCKET OF BLOOD and 1960's THE LITTLE SHOP OF HORRORS--as well as 1975's Corman-produced DEATH RACE 2000. Griffith also wrote notable Corman titles like 1957's NOT OF THIS EARTH and ATTACK OF THE CRAB MONSTERS and 1966's THE WILD ANGELS, and it was good that he was able to dine out on that connection for so long, because when left to direct his own films, the results land in varying degrees of unwatchability, with two of his projects for Corman--1979's JAWS ripoff UP FROM THE DEPTHS and 1981's Jimmy McNichol car chase comedy SMOKEY BITES THE DUST--ranking among the very worst films ever released under the auspices of Corman's New World Pictures. 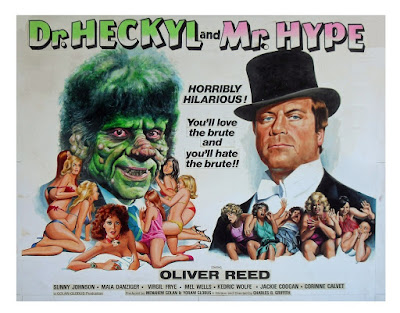 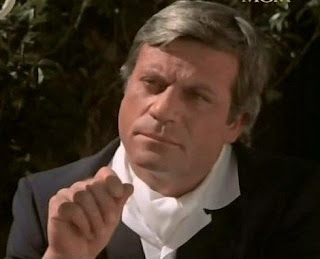 Sandwiched between those two bottom-of-the-barrel duds was DR. HECKYL & MR. HYPE, which isn't a Corman production but certainly feels like a particularly abysmal one. Instead, it was produced by Menahem Golan and Yoram Globus in the early days of their Cannon reign, before they carved their niche as the home of Charles Bronson, Chuck Norris, and all things ninja, which kept the lights on while they made doomed, clandestine deals on cocktail napkins. Golan and Globus were still finding their footing in Hollywood, and several of their releases around 1979-1980--GAS PUMP GIRLS, INCOMING FRESHMEN, HOT T-SHIRTS, THE HAPPY HOOKER GOES HOLLYWOOD--seem more like standard-issue New World drive-in offerings from the time. That's especially so with DR. HECKYL & MR. HYPE, from the involvement of Griffith, in one of the very few films he would make away from Corman, to the presence of Corman and/or New World stalwarts like Mel Welles (THE LITTLE SHOP OF HORRORS), Kedric Wolfe (UP FROM THE DEPTHS), Corinne Calvet (TOO HOT TO HANDLE), Charles Howerton (EAT MY DUST), and the legendary Dick Miller, perfectly cast as a loudmouth garbageman. What HECKYL lacks is the sense of exploitation and fun that Corman films almost always delivered (unless it was a movie helmed by Charles B. Griffith), barely earning its R rating and even cutting away at the first hint of nudity that doesn't even arrive until late in the film, which is something Corman never would've tolerated in a New World product. DR. HECKYL & MR. HYPE is so deadeningly tedious and so mind-bogglingly awful that one can't help but wonder if Griffith initially took his script to Corman, only to have him thumb through it, answer a phone that wasn't really ringing, tap his watch and politely say "Yeah sorry, Chuck, I, uh, I got a thing." 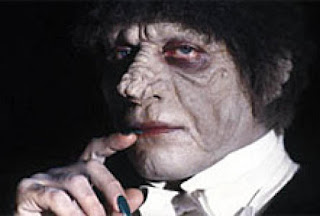 The idea of spoofing The Strange Case of Dr. Jekyll and Mr. Hyde is nothing new. Abbott and Costello met the pair in 1953, and THE NUTTY PROFESSOR alredy reversed the formula, with nerdy, socially inept Dr. Julius Kelp turning into "Buddy Love," and is generally regarded as Jerry Lewis' crowning achievement. But HECKYL is absolutely dead on arrival, with Reed--not a guy noted for his comedic skills and in a role initially pitched to Dick Van Dyke--as Dr. Heckyl, a monstrously ugly podiatrist with boils, warts, a bulbous, misshapen nose, awful teeth, a red eye, mop-top hair with the texture of steel wool, green fingernails, and pale green skin, making him look very much like a live-action version of Weirdly Gruesome from THE FLINTSTONES. People flee from him in terror ("Mine is the face that ruins a sunny day," he says) but all he wants is to find love. His colleague Dr. Hinkle (Welles) has been experimenting with a weight loss serum that has a side effect of turning one into what they've coveted, so the obese women he's used as guinea pigs all become young and gorgeous in addition to losing weight. It only takes a drop to be effective, and after Hinkle interrupts his attempt at suicide via garden-shear decapitation, a depressed Heckyl guzzles a significant quantity of the serum and morphs into his own id, "Mr. Hype," a handsome, well-dressed lothario with a nasty penchant for killing his conquests and throwing them in the dumpster outside Heckyl's apartment. Heckyl has no idea what Hype has done when he reverts back to usual self, but his actions have gotten the attention of cigar-chomping Lt. Mack Druck, aka "Il Topo" (Virgil Frye) and Coral Careen (Sunny Johnson), a patient for whom Heckyl has been carrying a torch for some time. 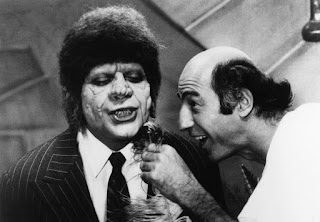 Reed's early narration establishes some level of pathos for Heckyl, but the decision to make him look so cartoonishly off-the-charts grotesque undermines any attempt at plausible empathy for the character or his situation. It also doesn't work as a spoof, since a total of zero jokes land, most of them limited to Lt. Druck's flat feet (he's a flatfoot, get it?) and his "ingrown nail" just being a metal nail impaling his toe and removed with a pair of pliers, a sight gag that's aimed at five-year-olds. Elsewhere, the jokes are limited almost entirely to characters having silly names that are supposed to be funny in and of themselves, like Wolfe as another Heckyl colleague, the lecherous Dr. Lew Hoo; Jackie Coogan as bumbling Sgt. Fleacollar; Calvet as French seductress Pizelle Puree; Howerton as Clutch Coogar, a good ol' boy car salesman with two left feet (more childish sight gags), and others like "Herringbone Flynn," "Fritz Pitzle," "Fran Van Crisco," nurses Pertbottom, Lushtush, and Rosenrump, twin rookie cops (Michael and Steve Ciccone) named "Hollowpoint" and "DumDum," and another cop named "Gurnisht Hilfn."


There's nothing here for anyone other than the most fanatical Oliver Reed completist (and maybe the curio value of spotting future BAD SANTA sidekick Tony Cox, credited as "Joe Anthony Cox"). It's hard to imagine what Reed saw in this project other than easy money, but he actually appears to be trying here, though one can only imagine the flop sweat under his makeup and the drunken rages he hopefully indulged in off-camera. He gets to sink his teeth into some bile-soaked rants as Hype lashes out at his victims, surrogates for all the women who have rejected the virginal Heckyl based solely on his looks, but through the lens of 2019, it comes off like excerpts from a manifesto by the world's most debonair incel. HECKYL caught Reed just as his days as an A-list lead were winding down on his way to the world of straight-to-video. Not long after this, Reed would basically accept any offer if it paid enough, even starring in 1983's CLASH OF LOYALTIES, a three-hour, mega-budget Iraqi propaganda war epic produced by Saddam Hussein that played at a couple of film festivals but was never officially released anywhere but Iraq. He then became a regular presence in Harry Alan Towers-produced exploitationers shot in South Africa in the waning days of apartheid in the late '80s (DRAGONARD, CAPTIVE RAGE, GOR, SKELETON COAST, HOUSE OF USHER). Once in a while, there was a rare acclaimed lead (Nicolas Roeg's 1987 film CASTAWAY) and an occasional high-profile supporting gig (THE ADVENTURES OF BARON MUNCHAUSEN), up until his final role in 2000's Oscar-winning GLADIATOR. His wonderful performance as wizened old gladiator trainer Proximo would've undoubtedly kick-started a late-career Reedassaince had he not died during production in 1999, collapsing in a Malta bar from a heart attack after buying rounds for everyone and out-drinking a group of sailors, which even Reed would probably agree was the most Oliver Reed way to go. And though she's given little to do, Johnson manages to convey some charm as Coral, enough that you'll feel sad remembering that she died tragically young, taken off life support by her family following a ruptured brain aneurysm at just 30 in 1984, a year after she landed her best-known role as Jennifer Beals' figure-skating best friend in FLASHDANCE. DR. HECKYL & MR. HYPE was only given scant distribution in the fall of 1980 before being shuffled off to cable and home video. Griffith would return to the New World lumberyard for the worthless SMOKEY BITES THE DUST and retired from movies after 1989's WIZARDS OF THE LOST KINGDOM II, a cheapjack sequel from Corman's Concorde headlined by David Carradine, Sid Haig, and future Phil Spector murder victim Lana Clarkson, and stitched together with copious amounts of stock footage from THE WARRIOR AND THE SORCERESS, BARBARIAN QUEEN, AMAZONS, and DEATHSTALKER II.