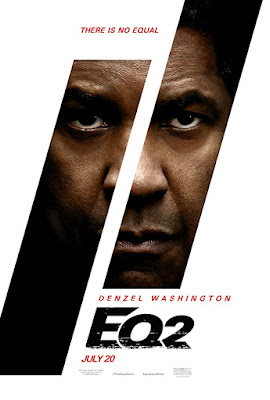 In the first sequel of his nearly 40-year career, the great Denzel Washington again demonstrates enough intensity and steely gravitas to elevate a routine and generic revenge actioner to slightly above average entertainment. Loosely based on the fondly-remembered 1985-89 CBS series THE EQUALIZER, the big-screen franchise--please don't call the next one THE 3QUALIZER--is the fourth teaming of Washington with his TRAINING DAY director Antoine Fuqua, and only slightly retains the premise of retired CIA agent Robert McCall (played by Edward Woodward in the series) offering his services to those in trouble and with nowhere else to turn. With Washington's interpretation of the character already established, the sequel is really just a high-end version of the kind of vigilante movies Charles Bronson would crank out for Cannon in the 1980s. Globetrotting from Istanbul to Brussels to D.C. to Boston, it does give Washington's McCall, a widower who leads a solitary existence and drives a Lyft part-time (he was apparently let go from his Home Depot job after the last film's in-store nail-gun and powertool bloodbath), a chance to help a few people in need: a young girl taken from her mother to her Turkish father's homeland; artistically-gifted teen Miles (MOONLIGHT's Ashton Sanders), who lives in his Boston apartment complex and is tempted by gang life; and elderly Holocaust survivor Sam Rubinstein (Orson Bean sighting!), who's spent his life unsuccessfully searching for both a stolen painting and his younger sister after they were separated as kids and sent to different concentration camps. 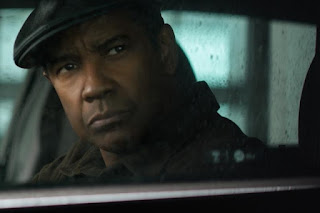 Of course, these subplots that most resemble the Woodward series are secondary to the crux of THE EQUALIZER 2, which has McCall investigating the murder of his former CIA boss Susan Plummer (Melissa Leo) in Brussels where she was working with Interpol on a husband/wife murder-suicide that looks staged (because it was) and may have agency ties (SPOILER: it does). McCall seeks out the help of his former partner Dave York (Pedro Pascal), who's understandably shocked to learn that he faked his own death years earlier with the assistance of Plummer. McCall does some snooping on his own, which leads to an attempt on his life by a hired killer under the guise of a Lyft passenger in a nicely-done action sequence. Plummer was obviously about to blow the doors off of something big, and the truth could be--wait for it--closer than McCall realizes. 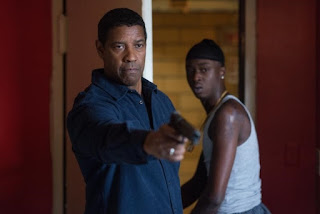 There's very little in the way of surprises in the cookie-cutter script by mercenary screenwriter Richard Wenk (THE MECHANIC, THE EXPENDABLES 2, THE MAGNIFICENT SEVEN), and even less in logic in some spots, especially with a climax that's essentially HIGH NOON in a hurricane in an evacuated seaside town. McCall's superhero-like Spidey Sense is one thing, but it's truly amazing how he arrived just as the storm was reaching peak strength with the bad guys very close behind, yet he still had time to plaster a stack of Melissa Leo headshots all over the place with which to taunt the killers as they search for him (also, on the way there, he had Brennan's husband, played by Bill Pullman, riding shotgun but lost him somewhere because he just disappears from both McCall's car and the movie). Like its predecessor, THE EQUALIZER 2 is harmless, brainless action fare, though it tones down the over-the-top gore until the climax, when McCall commences the throat slashings, disembowelings, and eye-gougings. It exists for no other reason than to solidify 63-year-old Washington's place in the post-TAKEN geriatric action scene (though Washington looks younger than his age, it's interesting to note how much older Woodward seemed on the TV series, which ended when the veteran British actor was just 59) and to serve as content on streaming and cable in perpetuity by this time next year. Even when he makes a bad movie--VIRTUOSITY and the terrible remake of THE TAKING OF PELHAM 123--Washington is incapable of phoning it in and going through the motions. He has some good moments here and seems to be enjoying himself, even showing some of the TRAINING DAY edginess in a few spots and putting forth more effort than you'd see from a lot of his contemporaries. It's dumb, it's reasonably entertaining, and you won't remember any of it by the time you get to the parking lot. It's a summer movie. 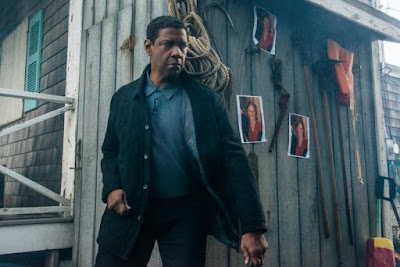