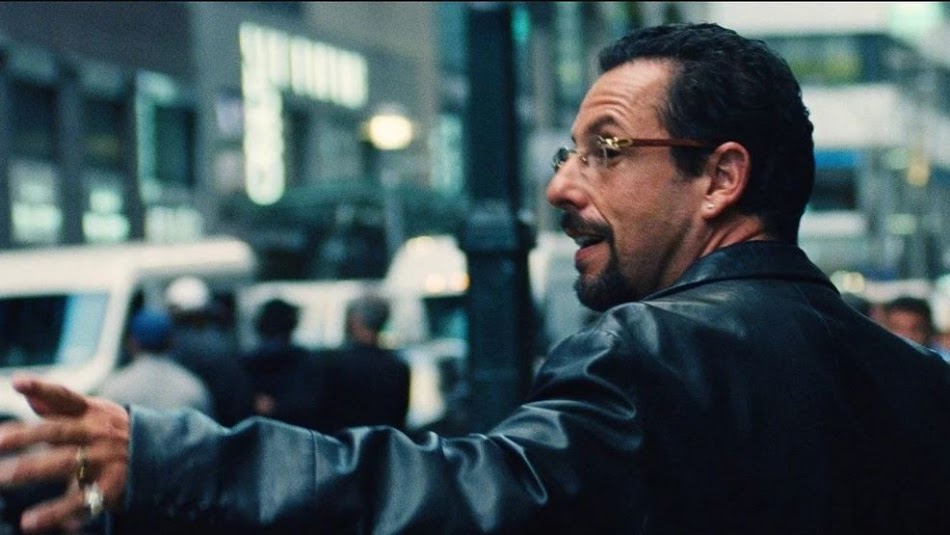 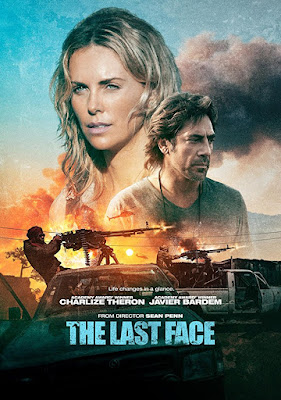 "Turgid" and "overwrought" don't begin to describe this oppressive, self-indulgent fiasco from director Sean Penn. Filmed in 2014 and laughed off the screen when it was in competition at the 2016 Cannes Film Festival, THE LAST FACE was shelved for another year before getting an unceremonious premiere on DirecTV and then expanding to VOD the same weekend that star Charlize Theron's ATOMIC BLONDE opened. A heavy-handed "message" film that makes you appreciate the comparative subtlety of Steven Seagal's climactic lecture in the 1994 eco-actioner ON DEADLY GROUND, THE LAST FACE tries to address the atrocities in war-torn areas of the world like Liberia, South Sudan, and Sierra Leone, but quickly relegates those concerns to the background to center on the torrid on-again/off-again romance between activist/doctor Wren Peterson (Theron) and Spanish playboy surgeon Miguel Leon (Javier Bardem). Dedicated to helping refugees through an aid organization set up by her late father--from whose shadow she can't seem to escape even though no one's trying to keep her there--Wren insists she doesn't need a man to complete her, then can't stop delivering anguished, Terrence Malick-inspired narration like "Before I met him, I was an idea I had." Wren's and Miguel's relationship has its ups and downs, as evidenced by three separate scenes of Wren yelling "You don't even know me!" and one where she even adds "Being inside me isn't knowing me!" Penn presents their initial, hesitant hooking up with all the grace and restraint of a daytime soap, trapping two Oscar-winning actors in the most unplayable roles of their careers. It's hard to give THE LAST FACE a chance when it opens with onscreen text that's an incoherent word salad about "the brutality of corrupted innocence" and how it ties into "the brutality of an impossible love..." (fade to black) "...shared by a man..." (fade to black) "...and a woman." Spicoli, please!

THE LAST FACE began life as a project for Penn's ex-wife Robin Wright. It was written by her close friend Erin Dignam, but when Penn's and Wright's marriage ended, Penn hung on to the script and pressed forward several years later with his then-girlfriend Theron. There's no shortage of camera adoration of Theron throughout, with Penn veering into Tarantino territory with shots of Theron's toes picking up a pencil before Bardem slithers across the floor to kiss her feet. Their relationship is consummated with a "cute" scene of making faces while they brush their teeth, and for some reason, songs by the Red Hot Chili Peppers figure into the plot, with a sweaty sex scene set to "Otherside" and an earlier bit where a helicopter pilot (Penn's son Hopper Jack Penn) can't shut up about the band. There's so much RHCP love here that it wouldn't be a surprise if Flea showed up as a spazzing doctor with a sock on his dick. BLUE IS THE WARMEST COLOR's Adele Exarchopoulos has an underwritten role as Wren's cousin and brief Miguel love interest, and reliable character actors like Jared Harris and Jean Reno disappear into the background as other doctors (Reno's character is named "Dr. Love" but he doesn't have the cure you're thinkin' of). Penn's intent may be earnest, but when he isn't haranguing the audience about how they need to pay more attention to what's going on in the world, he's sidelining what he wants you to focus on by turning the entire film into what looks like the world's most tone-deaf Harlequin romance adaptation. Penn has made some intelligent and challenging films as a director--1991's THE INDIAN RUNNER, 1995's THE CROSSING GUARD, 2001's THE PLEDGE, and 2007's INTO THE WILD--but THE LAST FACE is catastrophic less than a minute in and insufferable for the next 130. (R, 131 mins) 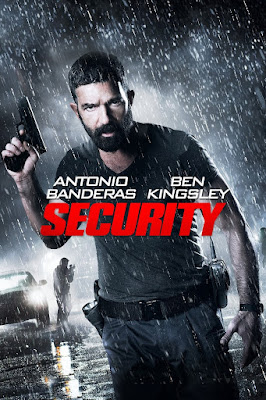 A perfunctory, go-through-the-motions clock-punch for everyone involved, SECURITY is an instantly forgettable time-killer that probably would've played better 20-25 years ago as a Joel Silver production with the same two lead actors, someone like Peter Hyams or Renny Harlin directing, and several million additional dollars in the budget. Consider it DIE HARD IN A MALL or ASSAULT ON FOOD COURT 13, or maybe even JOHN CARPENTER'S PAUL BLART: MALL COP, but any way you slice it, the biggest takeaway from SECURITY is how hilariously inept it is at trying to pass off three bizarrely-dressed soundstages at Bulgaria's Nu Boyana Studios as a suburban American shopping mall. There's about five or six storefronts with very little in the way of merchandise, a clothing store called "Luxury Fashion," randomly placed American flags, a stairway that leads to a wall, some plants, and letters on another wall spelling "M A L L," as if shoppers don't know where they are, plus the building used for the exterior looks like an abandoned factory. But even before the action moves to the mall, the Bulgarian ruse is up when a convoy of US Marshals assemble to move a witness to safety and all are in jackets and bulletproof vests reading "U.S.A. Marshals," which looks and sounds exactly like a task left to an Eastern European prop crew with a shaky grasp of English and no one following up on the work they did before the cameras started rolling. SECURITY was produced by Millennium Films, Avi Lerner's Cannon cover band, and they regularly pass off Bulgarian sets and locations as American, and while it's usually only noticeable if you're looking for it, it's rarely been as sloppily-executed as it is here. It's as unconvincing as the Millennium-produced 2009 remake of IT'S ALIVE, shot in Bulgaria but set in New Mexico, with the interiors of the lead character's house looking like the locally-hired carpenters came up with the layout and architectural design by doing a Google image search for Chi-Chi's.


Eddie Deacon (Antonio Banderas) is a former Special Forces captain suffering from PTSD after three deployments to Afghanistan. Separated from his wife and daughter and desperate for employment, he takes a job as an overnight security guard at a dilapidated mall in the outskirts of a city that's fallen prey to economic downturns and meth labs. Immediately after meeting his cocky, dudebro boss Vance (Liam McIntyre of Starz' SPARTACUS series) and his three other co-workers--how can this rundown mall afford five overnight guards seven nights a week?--ten-year-old Jamie (Katherine Mary de la Rocha) is pounding on one of the entrances, begging to be let in. She was the cargo in the "U.S.A. Marshals" transport, set to testify against the high-powered crime organization that employed her informant father before killing him and her mother, murders that she witnessed. The criminals, led by a man who calls himself "Charlie" (Ben Kingsley) but whose name may as well be Hans Gruber, then spend the rest of the night trying to get into the mall to get Jamie, which requires taking out the security crew, now led by the take-charge Eddie, who of course, views protecting Jamie as his shot at redemption and proof that he's capable of taking care of his own daughter. Director Alain Desrochers employs a few clever touches--like Jamie chasing some of Charlie's goons with a remote control car and the security team communicating via pink, toy walkies--but the whole production is just too chintzy-looking for its own good, looking very nearly as cheap as a Bratislava-shot Albert Pyun rapsploitation trilogy. 57-year-old Banderas is still in great shape and could easily handle the transition into the 60-and-over action star field that Liam Neeson has owned for several years, but he looks bored. Kingsley brings a little class just by being Ben Kingsley, but even he can't do much with a one-dimensional villain who, at one point, stands outside a barricaded door and purrs "...and I'll huff...and I'll puff..." In the requisite Alexander Godunov henchman role, Cung Le glowers and grimaces as someone named "Dead Eyes," and you'll also get some bonus shitty CGI explosions courtesy of Lerner's usual Bulgarian clown crew at Worldwide FX. SECURITY is hardly the worst of its type and is a perfectly acceptable way to kill 90 minutes if you're bored and you find it streaming, but any effort you exert to see it would still be more than the production design team put in to make those sets look like an actual, functioning mall. (R, 92 mins) 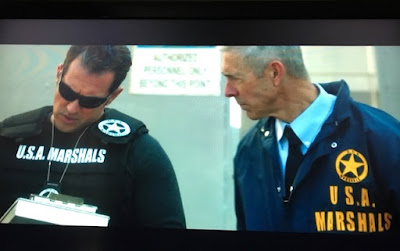