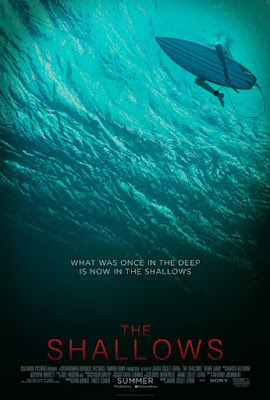 THE SHALLOWS doesn't give JAWS any cause for concern about losing its place as the greatest shark movie ever, but it gets the job done as mindless summer entertainment and the kind of relatively low-budget film ($17 million--pocket change by today's industry standards) that can quietly become a very profitable sleeper hit. It's handled in the best B-movie fashion by director Jaume Collet-Serra, who's become a reliable genre craftsman in the last several years with 2009's underrated and insane ORPHAN, and a pair of enjoyable Liam Neeson vehicles with 2011's Hitchcockian UNKNOWN and 2014's NON-STOP. Keeping the film lean and fast-moving (the closing credits start just shy of the 80-minute mark), Collet-Serra and screenwriter Anthony Jaswinski (the terrible VANISHING ON 7TH STREET) plow through the exposition as quickly as possible and get to the heart of the surfer vs. shark story. 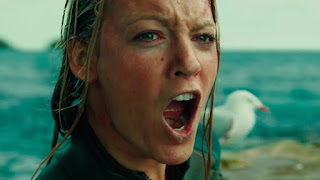 Still mourning her mother's death from cancer and seeking some kind of closure, med school dropout Nancy (Blake Lively) is ditched by her hard-partying friend and opts to go alone to an isolated Mexican beach that her mother visited while pregnant with her. An experienced surfer, Nancy rides some waves, enjoys the scenery, and briefly chats with a pair of nice locals who soon head back to the shore. Of course, that's just about the time Nancy is bitten and dragged under the water. She gets free, climbing onto a nearby decomposing whale carcass floating in the water. The shark, a great white, rams the carcass, throwing her off and sending her swimming for a nearby rock formation sticking out of the water. From there, it's Nancy vs. the great white, one trying to outsmart the other as Nancy fashions a tourniquet from her wet suit to stop the profuse bleeding from the bite on her leg (a great excuse for Collet-Serra to show off Lively in the skimpiest swimwear this side of Jacqueline Bisset in THE DEEP, at least until the gangrene makeup gets applied), which she holds together using her earrings as makeshift stitching. She finds an unlikely sidekick in an injured seagull she dubs "Steven Seagull." A few other characters wander into the water despite Nancy screaming "Shark!" and of course, they usually end up as dinner. As the tide comes in, Nancy needs to get off the rock as the persistent shark just endlessly circles her, almost sending Nancy a message that it's got nowhere else to be and she's got nowhere to hide. 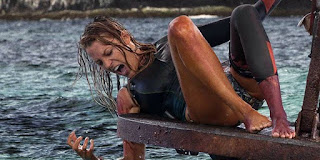 THE SHALLOWS is a high-end junk movie that knows it's a junk movie. Lively makes a strong and believable heroine and for the most part, the CGI effects are pretty good (the shark is much more convincing here than the technology allowed in, say, 1999's DEEP BLUE SEA, a wild and fun shark flick completely undone by primitive CGI work that was unconvincing then and simply embarrassing now). Structurally similar to OPEN WATER, THE SHALLOWS is a lot prettier to look at, not just with Lively but with some crystal clear blue ocean off the coast of Queensland, filling in for Mexico. There isn't much depth and there isn't whole lot to say with this--it's a classic case of "It is what it is," and it works. It's not trying to be another JAWS, though it certainly acknowledges its influence, from the always-unnerving shots of the shark fin protruding from the water to giving Lively her own Roy Scheider last word when she finally gets the shark where she wants it. However, it's a sign of the times that the comparative gentlemanly elegance of "Smile, you son of a bitch!" has given way to the more blunt and verbally economical "Fuck you!" but I suppose it's an appropriate farewell.
Posted by Mark at 5:04 PM