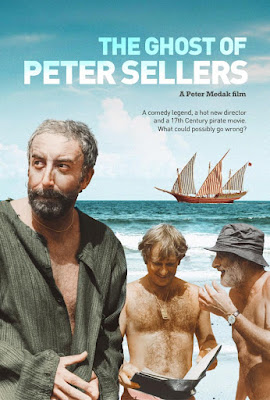 Peter Sellers (1925-1980) was renowned as a gifted comedic genius, but it was also no secret that he was notoriously difficult on a movie set. His behavior during the making of the 17th century pirate comedy GHOST IN THE NOONDAY SUN in 1973 nearly destroyed the career of promising director Peter Medak, who at the time was riding high on the worldwide critical acclaim of 1972's THE RULING CLASS. The nightmare production of NOONDAY SUN haunted Medak so much over the years that he made the documentary THE GHOST OF PETER SELLERS as a sort-of therapeutic, closure-seeking exorcism. From 2016 to 2018, the now-82-year-old Medak and screenwriter friend Simon van der Borgh (IN TRANZIT) traveled across the US, Europe, and to the still-standing locations on Cyprus, interviewing some of the very few surviving actors and various others with connections--Sellers' personal assistant, co-writer/co-star Spike Milligan's agent, co-star Anthony Franciosa's widow, among others--to share their memories of a project that began with such promise and enthusiasm and quickly devolved into a miserable catastrophe thanks to Sellers' erratic and unpredictable behavior. Sellers pursued Medak for the project, and even though Sellers was in a major slump at the time prior to the PINK PANTHER series starting up again in 1975, the director jumped at the opportunity since "he was the greatest comic actor in the world." It was a big-budget production backed by Columbia and was being shot on location on Cyprus, but Medak sensed something was wrong before shooting even began. He met with Sellers to go over the script and it quickly became apparent that the star still hadn't even read it, and he was later distracted on the phone by an argument with girlfriend Liza Minnelli. Sellers then arrived on Cyprus "catatonically depressed" after breaking up with Minnelli the day before. Within a few days, Sellers somehow fired the producers and tried to talk Medak into quitting. Shortly after that, a long, complex exterior tracking shot was ruined when Sellers, already living with chronic cardiac issues after several mild heart attacks dating back to 1964, collapsed, screaming in agony, suffering another apparent heart attack. He was airlifted to a hospital as production was briefly halted while they waited for word on the star's condition. A few days later, Medak opened a Cyprus newspaper and saw a paparazzi shot of Sellers in London, out on the town with Princess Margaret. "Who fakes a heart attack when they already have a heart condition?" Medak wondered. "And how did he even get off the island?"


Sellers returned to Cyprus two days after that with a fake doctor's note saying he couldn't work, and it became obvious to Medak that Sellers was deliberately trying to get out of the movie and was willing to sabotage it to do so. Columbia execs and producer John Heyman started sending telegrams to Medak threatening to fire him if he couldn't get his act together (Medak: "Tell fucking Heyman to get down here and try to control Peter!"). Sellers had a heated confrontation with Franciosa and refused to be in the same shots with him going forward (cue a scene with the two of them from NOONDAY SUN and it's glaringly obvious they weren't there at the same time). Shooting fell weeks behind schedule (Medak's handwritten notes: "Sellers pissed off," "Sellers refused to work," "Sellers being impossible again," and typed production notes documenting Sellers' numerous absences or needing to leave the set early because he was "seasick"). Sellers tried to organize a rebellion among the crew and called for a "no confidence" vote in Medak in an attempt to get him fired, then he threatened to quit unless Medak allowed his longtime friend Milligan to completely rewrite the script. In doing so, Milligan also gave himself a prominent and shamelessly mugging supporting role, but because so much time was lost, entire key scenes were never shot and when Columbia saw what Medak was barely able to cobble together, they refused to release the movie and shelved it. It's both darkly humorous and heartbreaking watching Medak relive these memories--the time and distance make him able to see the sheer absurdity in the way the film crashed and burned, but at the same time, it clearly had a profound effect on him. He gets quite emotional at times (Milligan's agent grabs him by the hand and tells him "You are more than this...you need to let it go"), though you see him finding some catharsis and much-needed closure during the process. And with his still-pronounced Hungarian accent, Medak's narration and observations bring to mind Werner Herzog, and THE GHOST OF PETER SELLERS has numerous similarities to Herzog's 1999 documentary MY BEST FIEND, about his tumultuous collaborations with the maniacal Klaus Kinski. 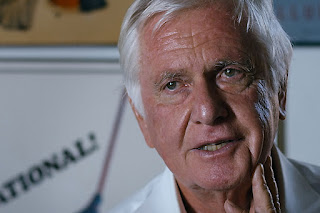 There's also some priceless home movie footage of Milligan cracking himself up reading his own script (it's interesting that not one clip of GHOST IN THE NOONDAY SUN shown here is even remotely funny in or out of context), or Medak having a sitdown with Sellers' CASINO ROYALE and THE MAGIC CHRISTIAN director Joseph McGrath and his FIENDISH PLOT OF DR. FU MANCHU director Piers Haggard as they share some Peter Sellers horror stories (McGrath: "It was never fun working with him"). Medak never became the auteur that THE RULING CLASS hinted he might be, but he went on to a busy journeyman career in film and TV, with projects ranging from excellent (1980's THE CHANGELING) to not (1986's THE MEN'S CLUB and 1998's SPECIES II), and he enjoyed a brief resurgence in the early '90s with a trio of acclaimed crime thrillers: 1990's THE KRAYS, 1991's LET HIM HAVE IT, and 1994's ROMEO IS BLEEDING. GHOST IN THE NOONDAY SUN remained unreleased for years before it surfaced in Canada in 1984 as THE PINK PIRATE (!) and eventually turning up on home video and syndicated TV in the US not long after. Medak gets a little meandering and veers off course at times, particularly during a long segue where Sellers talked him into directing a Benson & Hedges commercial during production. But it's a must for Sellers fans and a worthy addition to the "nightmare clusterfuck movie shoots" documentary subgenre along with the likes of BURDEN OF DREAMS, HEARTS OF DARKNESS, and LOST IN LA MANCHA. It's a fascinating look at a production gone horribly awry and a filmmaker who's been haunted by the traumatic experience for decades. As an emotional, teary-eyed Medak states at the end when he thinks of Sellers: "He was a fucking genius. And it was a great to be there for just a second, whatever pain it caused." (Unrated, 93 mins) 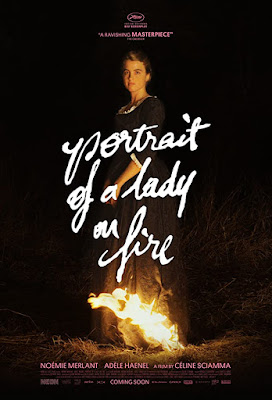 One of last year's most acclaimed arthouse titles, French filmmaker Celine Sciamma's slow-burning period piece PORTRAIT OF A LADY ON FIRE got a brief Oscar qualifying run in NYC and L.A. in December 2019, but the COVID-19 coronavirus ended up shutting down its early 2020 rollout and relegating it to VOD. In late 17th century France, artist Marianne (Noemie Merlant) is hired by a Countess (Valeria Golino) to journey to an isolated island off the coast of Brittany. She is to paint a portrait of the Countess' daughter Heloise (Adele Haenel), who was recently whisked away from a convent to fulfill an arranged matrimonial contract with the son of a prominent Milanese family after the death of her older sister. "Did disease take her?" Marianne asks servant girl Sophie (Luana Bajrami), who replies with a curt, loaded "No." A previous painter was unable to complete a portrait of Heloise because she refused to sit for him. "She refuses this marriage," the Countess explains. Tasked with painting Heloise without her knowing it, Marianne agrees to the cover story of being hired as a companion for her walks, committing the details of her face to memory for the painting and serving as a deterrent should Heloise impulsively decide to commit suicide like her sister. The standoffish Heloise eventually opens up and the pair bond to the point where Marianne feels she must explain her true purpose for being there. Heloise sees the resulting portrait and dislikes it, prompting Marianne to destroy it. The Countess is about to dismiss Marianne until Heloise agrees to sit, with her mother announcing that she's going away for five days and she expects the work to be finished upon her return.

That Marianne and Heloise will fall into a forbidden romance is a given, but PORTRAIT has a lot to say about patriarchal society and the role of women within it, while drawing extensively from the story of Orpheus and Eurydice. Both Heloise and Sophie have a difficult time grasping the relative freedom Marianne enjoys. She has no plans of being married and is set to take over her father's business upon his retirement or death. In a world where women like Sophie exist to serve others and Heloise is forced into an arranged marriage as a replacement for her dead sister because, well, a deal's a deal (in her last letter to Heloise, her sister gave a vague apology, the meaning of which became unfortunately clear to her in the aftermath), Marianne's independence is an anomaly. With its ornate production design and some BARRY LYNDON-style natural lighting in its early sequences, PORTRAIT OF A LADY ON FIRE is exquisitely detailed almost to the point of Kubrickian detachment for a while, but around the time of the bonfire sequence, you realize just how much it's pulled you in and it really becomes an emotional wrecking ball in its closing minutes (and while there are fleeting erotic elements, we're not talking BLUE IS THE WARMEST COLOR here). The camera adores Haenel and her haunting, expressive eyes--she and Sciamma were a couple in the years prior to making this though they remain friends and professional collaborators--and this probably would've been a hit on the arthouse circuit had a pandemic not occurred. (R, 121 mins)