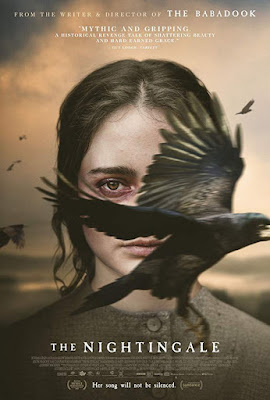 From the moment an Italian journalist had his credentials revoked after shouting "Whore!" as writer/director Jennifer Kent's name appeared in the end credits of its screening at the 2018 Venice Film Festival, it was clear that THE NIGHTINGALE was guaranteed to provoke a reaction. Making her first film since the acclaimed THE BABADOOK, Kent pulls absolutely no punches with this visceral, harrowing, and often horrifying period western set in the 1820s during the Black War and the British Army's genocidal colonization of Van Diemen's Land, which later became Tasmania. Irish-born Clare (Aisling Franciosi) has served several years in prison on a theft charge but has been allowed to finish her sentence as as indentured servant at an Army outpost, where she works during the day and lives in a small shack with her husband Aidan (Michael Sheasby) and infant daughter. The outpost's sadistic commander, Hawkins (Sam Claflin), regularly has Clare--"the nightingale"--sing for the leering troops, and when she reminds him that her time served was over three months ago and he still hasn't signed off on her release, he attacks and rapes her in a violent rage. When a visiting commander (Ewen Leslie) is unimpressed with Hawkins' attitude and his drunken regiment, and witnesses Aidan confronting him about his refusal to release Clare, he informs him that he's being turned down for the promotion that he was expecting. Still stuck at the outpost and blaming Aidan, Hawkins and two sycophantic flunkies--Ruse (Damon Herriman) and Jago (Harry Greenwood)--barge into the couple's shack and what transpires is almost too unspeakable to even detail here.


Hawkins decides to override his commander and go to headquarters in Launceston to lobby for the promotion himself. It's a several-day journey, and he takes Ruse, Jago, and three convicts (including a ten-year-old boy, played by ELI's Charlie Shotwell), with elderly aboriginal tracker Charlie (Charlie Jampijimpa Brown) leading the way. Upon hearing they're venturing to Launceston, Clare offers what little she has to Charlie's nephew Billy (Baykali Ganambarr) to track the group through the harsh terrain. After an opening half hour that's almost too grueling to endure (this is never exploitative, but be aware--this is rough-going and very upsetting at times), THE NIGHTINGALE settles into somewhat more conventional revenge western mode (as conventional as brutal Australian westerns can get), with Clare and Billy slowly establishing a grudging bond after she initially reveals herself to be just as racist and prejudicial as the British she so strongly professes to despise (she keeps her gun pointed at Billy at all times and even makes a comment about him being a cannibal). The character arcs for Clare and Billy (who also ends up with his own reasons for revenge on Hawkins and his crew) may be a tad predictable, but the strong performances from Franciosi and Ganambarr make up for it, and I really can't recall the last time I encountered villains as thoroughly despicable as Hawkins and Ruse, with Claflin (THE HUNGER GAMES) and Herriman (who played Charles Manson in both Netflix's MINDHUNTERS and briefly in Quentin Tarantino's ONCE UPON A TIME IN HOLLYWOOD) never going cartoonish and over the top, which makes the actions of their characters even more disturbing. Harsh, ferocious, and absolutely unflinching in its portrayal of the worst that humanity has to offer (and yes, there's a modern allegory at play here involving race, class, and patriarchy that wisely avoids the heavy hand), THE NIGHTINGALE is also a film about redemption in the best UNFORGIVEN sense, with a subversion of expectations and taking to heart that old Confucius quote about digging two graves before embarking on a mission of revenge. As if it needs to be said at this point, THE NIGHTINGALE isn't for everyone, but it's a riveting and exhausting experience that isn't easily shaken. (R, 136 mins) 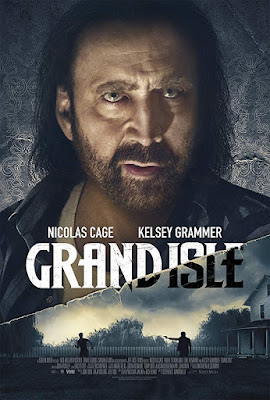 GRAND ISLE feels like one seriously uneven film that's been made from three wildly different scripts, all of which seem tailored to allow for gratuitous Nic Cage freakouts. Yes, GRAND ISLE is another straight-to-VOD Cage clunker, but for a while, it's actually not bad. It opens as an overbaked Southern gothic that seems to be heading toward a Louisiana noir with a big Tennessee Williams influence. And it ends an overwrought PTSD drama complete with a dedication to "our brave troops." And somehow, in the middle, is a Blumhouse-style horror movie. The script is credited to Iver William Jallah and Rich Ronat, but may have been subjected to rewrites by...anyone who happened to be walking by the set?  Set in Grand Isle in 1988, the film opens with a framing device where aimless Buddy (Luke Benward, best known for his days as a child actor, playing Mel Gibson's young son in WE WERE SOLDIERS and starring in HOW TO EAT FRIED WORMS) is under arrest and being interrogated by a dogged detective (Kelsey Grammer, chewing on a jambalaya-soaked accent that lands somewhere between Fred Thompson and SNL's "Maine Justice"), who's about to nail his balls to the wall for the murder of a victim to be named later. Buddy is a Navy vet who's married to his high school sweetheart (Emily Marie Palmer) and has an infant daughter. Money's tight and he takes handyman gigs where he can. He's called to fix a picket fence at the remote mansion of unstable, gun-toting, alcoholic Vietnam vet Walter (Cage, with his CON AIR mullet) and his sultry, sex-starved wife Fancy (KaDee Strickland). While Buddy is badgered and harangued by Walter, Fancy barely hides her desire to get in his pants. Things get even more uncomfortable for Buddy when an approaching hurricane picks up intensity and forces him to take refuge with the dysfunctional couple, who spend the night playing passive-aggressive head games with one another and their guest, with Fancy also being deliberately evasive about why there's a bunch of locks on the basement door.

Things happen--Walter drinks until he passes out, Fancy seduces Buddy, Walter wakes up and offers Buddy $20,000 to kill Fancy, and Buddy really wants to know what's in the basement--and to this point, GRAND ISLE is no great shakes, but it's moderately engaging and reasonably entertaining trash with a typically over-the-top Cage matched by the femme fatale histrionics of a game Strickland. Then it takes a sudden turn into straight-up horror once Buddy discovers their secret. Even this abrupt tonal shift is handled relatively well until MOMENTUM director Stephen S. Campanelli (a veteran camera operator and member of Clint Eastwood's Malpaso stock company since THE BRIDGES OF MADISON COUNTY), seemingly losing interest in his own movie, wraps up the horror storyline in the most perfunctory fashion with no punch at all, then changes the focus to Walter's PTSD and his guilt over an injury that got him sent home while the rest of his platoon perished in battle. Wait, what? What the fuck does that have to with the previous 80 minutes? What happened to the not-bad Southern gothic/noir/horror mash-up that we were watching? Is this the same movie? And then to cap it off with a dedication to the "brave troops" like the whole movie was about them and bringing awareness to their concerns? (Unrated, 97 mins)