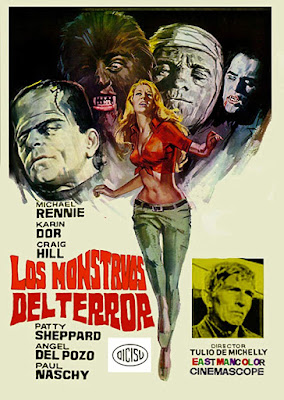 The second film in Spanish horror star Paul Naschy's loosely-connected, long-running "El Hombre Lobo" werewolf series, ASSIGNMENT TERROR is largely an homage to the classic Universal horrors that Naschy loved, particularly the all-star monster mash-ups like 1944's HOUSE OF FRANKENSTEIN and 1945's HOUSE OF DRACULA. At least that was Naschy's intention when he wrote the script. The end result is an uneven hodgepodge of monster rally and sci-fi alien invasion in the style of a Eurospy 007 knockoff, the schizophrenic tone probably inevitable given the troubled and financially-strapped shoot. Money ran out and production shut down more than once, prompting the original director, Argentina-born Hugo Fregonese (who spent some time in Hollywood in the 1950s with MY SIX CONVICTS, MAN IN THE ATTIC, and BLACK TUESDAY before settling in Europe in the 1960s) to walk off the film with about 70% of it completed. Spanish-based Argentine director Tulio Demicheli (best known for the ludicrously over-the-top, acid-bathed 1973 gangster outing RICCO THE MEAN MACHINE) was brought in as a replacement, and Antonio Isasi (THEY CAME TO ROB LAS VEGAS) was also involved at some point near the end of the shoot and supervised the post-production, though only Demicheli receives directing credit (to add to the confusion, German prints name one Eberhard Meichsner as director, though he had nothing to do with any of it and was likely credited for German co-production quota purposes). Given its chaotic production with multiple directors cycled through, it's a wonder ASSIGNMENT TERROR was completed at all. 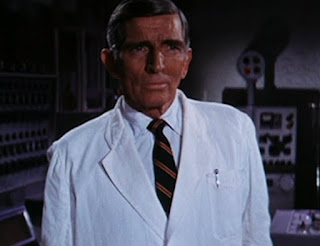 Unlike his other "El Hombre Lobo" vehicles as the tormented nobleman-turned-werewolf Waldemar Daninsky, Naschy relegates himself to a sixth-billed supporting role in ASSIGNMENT TERROR. The star is Michael Rennie, best known for his iconic turn as alien visitor Klaatu in the 1951 classic THE DAY THE EARTH STOOD STILL. Naschy never relied on fading Hollywood stars for export value, so Rennie was an unusually big name for an "El Hombre Lobo" outing. The veteran British actor was in declining health and in a serious career slump by 1970, and like the 1966 sci-fi cheapie CYBORG 2087, his very presence here is a nod to his being in THE DAY THE EARTH STOOD STILL in much better days. ASSIGNMENT TERROR proved to be Rennie's last film (he's dubbed by someone else), and in it, he plays Dr. Odo Varnoff, an alien from the planet Ummo. Varnoff has arrived on Earth with nefarious plans of Ummo domination, with the help of two other alien entities inhabiting the recently deceased bodies of Dr. Maleva Kerstein (German krimi fixture Karin Dor), a biochemist who was killed in a car accident, and Dr. Kerian Berner (Angel del Pozo), a surgeon killed in combat. Varnoff's diabolical plot includes abducting beautiful women to torture and brainwash to do his bidding, but the key to his plan is--for some reason--to find, reanimate, and assemble the world's most famous monsters, or the closest proximity of that which Naschy's apparent fear of copyright infringement will allow. First, in true HOUSE OF FRANKENSTEIN fashion, he finds the skeletal remains of vampire "Count Jaros" (Manuel de Blas) at a traveling circus and resurrects him by removing the stake from his rib cage. He exhumes the corpse of Daninsky and revives him by extracting a silver bullet lodged in his heart (cue graphic heart surgery stock footage). Next is a trip to Egypt where Varnoff finds and awakens "The Living Mummy" (Gene Reyes), and finally a journey to a long-vacant German monastery once owned by Dr. Ulrich von Farancksalan, where Varnoff revives the feared "Farancksalan Monster" (Ferdinando Murolo). 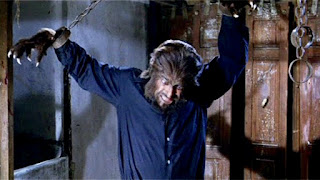 Those Universal monster rallies are remembered with great affection by fans, but they blundered badly in the way they very rarely had the monsters interacting with one another. For example, in HOUSE OF FRANKENSTEIN, John Carradine's Dracula is killed off before Lon Chaney's Wolf Man and Glenn Strange's Frankenstein Monster even appear, and both HOUSE OF FRANKENSTEIN and HOUSE OF DRACULA keep the Monster on the lab table until literally the last two minutes of the movie. Only ABBOTT AND COSTELLO MEET FRANKENSTEIN got it right by throwing them all together, something ASSIGNMENT TERROR, for the most part, doesn't do. Naschy's werewolf briefly throws down with "The Living Mummy" and the "Farancksalan Monster" but he never deals with "Count Jaros," who spends most of his screen time trying to cast a spell on Maleva. There's also some Austin Powers dance cutaways and a scene where Rennie attends a mod freakout, plus an inconsequential police investigation headed by Inspector Tobermann (American expat Craig Hill, who spent most of his career in Europe), who's trying to get to the bottom of all the disappearing blondes in the area. ASSIGNMENT TERROR's patchwork assembly allows time for romantic subplots for both Tobermann and the mayor's daughter (Patty Shepard, another American expat who married de Blas and spent her entire career working in the Spanish film industry), as well as Maleva and Dr. Berner, which incurs the wrath of the jealous Varnoff, who commands the "Farancksalan Monster" to kill Berner. 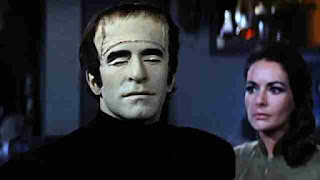 Just out on in a pristine Blu-ray edition from Scorpion and being sold exclusively through Ronin Flix (because physical media is dead), ASSIGNMENT TERROR is amusingly goofy and entertaining, usually for the wrong reasons. De Blas doesn't get much to do as "Count Jaros," Naschy has a couple of good transformations sequences but is sidelined or dispatched for Varnoff henchman duty for much of the film, and Reyes makes a peculiar but occasionally creepy "Living Mummy." Murolo's monster is hilariously bad, sporting the classic flat head but also with trendy sideburns, Groucho Marx eyebrows, and a squint that makes him look somewhere between near-sighted and high AF. According to film historian Troy Howarth on the Blu-ray commentary, Naschy later complained that ASSIGNMENT TERROR's makeup artist Francisco R. Ferrer was the worst he'd ever worked with, and after one look at Murolo, who resembles a younger Larry David going to a Halloween party in a hastily-assembled Frankenstein costume, you'll be inclined to agree. It's no fault of the actor, who also doesn't get any help from his initial appearances showing him walking around in regular shoes, and the guy is 5' 9" tops, which doesn't make for an imposing monster, regardless of whether it's created by Frankenstein or Farancksalan. Fortunately, someone found Murolo some large, heavy boots for later in the film, which also helps him with the lumbering, staggering gait associated with the monster. It was soon after ASSIGNMENT TERROR that Naschy would cement his place in horror history, eventually making at least another half dozen official "El Hombre Lobo" movies and going on to play his own versions of classic monsters in films like HUNCHBACK OF THE MORGUE, DR. JEKYLL AND THE WEREWOLF (where he was both El Hombre Lobo and Mr. Hyde, with Jack Taylor pulling half-duty as just Dr. Jekyll), and THE MUMMY'S REVENGE, with a standout being 1973's surreal and atmospheric COUNT DRACULA'S GREAT LOVE, one of the all-time great Spanish horror films. 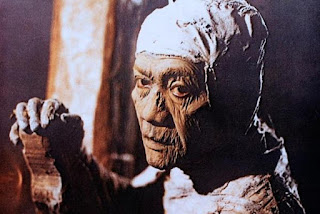 Originally titled LOS MONSTRUOS DEL TERROR, ASSIGNMENT TERROR was shown in parts of Europe as DRACULA VS. FRANKENSTEIN and, in a face-off of sheer pointlessness the likes of which we wouldn't see again until Bonnie Tyler, Molly Hatchet, Kiss, Ace Frehley, and Robin Beck all recorded versions of "Hide Your Heart" over 1988-89 or Cannon and the ousted Menahem Golan squared off in the Great LAMBADA vs. THE FORBIDDEN DANCE War of 1990, it became one of three competing DRACULA VS. FRANKENSTEINs to be released at roughly the same time, along with Al Adamson's DRACULA VS. FRANKENSTEIN (1971) and Jess Franco's DRACULA CONTRA FRANKENSTEIN (1972). Adamson emerged victorious, as the Franco film became DRACULA, PRISONER OF FRANKENSTEIN, while the Naschy project was ultimately rechristened with its most widely-used title ASSIGNMENT TERROR. It skipped theaters stateside and made its belated American debut on late-night TV in 1973 as part of an AIP syndication package called "Ghoul-O-Rama," two years after star Rennie died in June 1971. His official cause of death was emphysema, though we shouldn't rule out embarrassment.