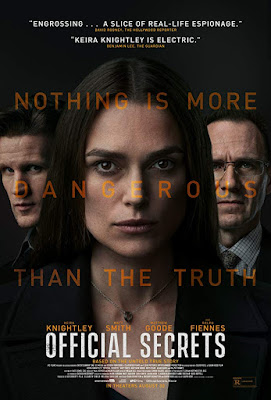 The saga of British whistleblower Katherine Gun is, at least stateside, one of the least-remembered chapters of the misguided journey to the 2003 invasion of Iraq. In a way, it's oddly fitting that OFFICIAL SECRETS, which stars Keira Knightley as Gun, was barely released in theaters by IFC Films. That's a shame, because it's a well-done political thriller as well as a solid investigative journalism drama from director/co-writer Gavin Hood, who most recently helmed 2016's riveting drone strike nailbiter EYE IN THE SKY. As the film opens in January 2003, Katherine, who was raised in Taiwan by British parents, works as a Mandarin translator for GCHQ, the signals intelligence division of the British government. It's a largely uneventful job until her entire department is sent a mysterious e-mail from the NSA that goes into detail about an intelligence plot between the US and UK governments to essentially bully and blackmail the less powerful members of the UN Security Council into going to war with Iraq under the guise of Saddam Hussein having WMDs. As everyone has signed an agreement that every aspect of their work falls under the 1989 "Official Secrets" Act, none of Katherine's co-workers give the e-mail much thought and refrain from discussing it. But she's troubled enough by its implications that she passes it on to a trusted government employee friend (MyAnna Buring), who in turn passes it to a controversial activist (Hattie Morahan) who then forwards it to Observer staff writer Martin Bright (Matt Smith). The Observer is fully onboard with the coming war, much to the chagrin of their bad-tempered US politics columnist Ed Vulliamy (Rhys Ifans), who berates managing editor Roger Alton (Conleth Hill) with frequent tirades that they should be doing their jobs as reporters instead of regurgitating Prime Minister Tony Blair's press releases. Alton reluctantly lets Bright run with the story, which eventually blows up in Katherine's face, as she never thought anything would come of it, and now the intelligence higher-ups are calling in the interrogators and breaking out the lie detectors because they know the leak had to come from the GCHQ department.

The resulting shitstorm offers Katherine the usual Alan J. Pakula-esque paranoia of bugged phones, surveillance, and being followed everywhere she goes, and it very nearly gets Katherine's Muslim husband Yasar (Adam Bakri) deported to Iraq. She eventually retains the services of civil liberties attorney Ben Emmerson (Ralph Fiennes) when it becomes clear that the British government intends to prosecute her and send her to prison, with the added threat that even discussing any aspects of the case with a lawyer is itself cause for more charges of violating the Official Secrets Act. OFFICIAL SECRETS is a compelling drama that hits the ground running (it's not even 20 minutes in before we get a clandestine meeting in a dimly-lit parking garage), with a credible and restrained performance by Knightley that wisely avoids all the big awards-bait moments to keep her depiction of Katherine Gun as grounded as possible. The back end does suffer from a bit of some fawning Gun hagiography, and it may seem a little fashionably late as far as Iraq War-related movies go, but for the most part, OFFICIAL SECRETS is a fine film that deserved more attention than it got and probably could've been a decent word-of-mouth hit on the arthouse circuit (other familiar faces in the solid ensemble cast include Matthew Goode, Jeremy Northam, Indira Varma, and Kenneth Cranham). The closing scene, and particularly Fiennes' final line, would've been a real crowd-pleaser. (R, 112 mins) 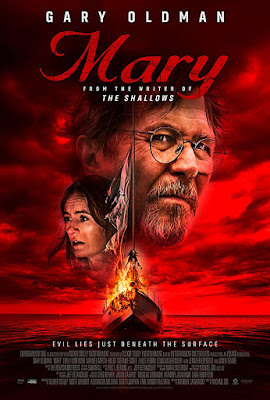 Remember when Gary Oldman won an Oscar for 2017's DARKEST HOUR? By any chance, does Gary Oldman remember? Just a few months ago, he appeared in the unwatchable support-group-for-assassins "comedy" KILLERS ANONYMOUS and he currently stars in the straight-to-VOD actioner THE COURIER (don't worry, I'm sure I'll get to it soon enough), where he's second-billed to Olga Kurylenko, currently third on the action heroine depth chart behind Milla Jovovich and Noomi Rapace. These aren't the kind of projects you tackle when you've just been awarded an actor's highest honor. They're the kind of jobs Nicolas Cage accepts to pay his bills for another month. And in the case with the moronic "possessed yacht" horror movie MARY, it's even worse as Oldman reportedly stepped in to replace--wait for it--Nicolas Cage. Dude, you're less than two years out from an Academy Award and you're taking Nicolas Cage's 2019 turndowns? To damn with faint praise, MARY is slightly better than KILLERS ANONYMOUS, but then, so are most new Nic Cage movies. MARY is a weak hodgepodge of at least a half-dozen underdeveloped ideas that are mostly abandoned amidst the incoherent mayhem that develops. Oldman phones it in as Dave, a Florida fisherman who impulsively buys a ramshackle old yacht called Mary in an attempt to set up his own boat charter business. It's also his way of trying to bring his family back together after his wife Sarah (Emily Mortimer) had a brief fling that put a strain on both their marriage and her relationship with their oldest daughter Lindsey (Stefanie Scott), while younger daughter Mary (Chloe Perrin) remains blissfully unaware of all the tension. I don't know...if Dave thinks buying a shitty old boat is gonna save his marriage, then I can see why Sarah stepped out on him.


They set sail on the Mary for a journey to the waters of Bermuda (uh oh), along with Dave's friend and business partner Mike (Manuel Garcia-Rulfo) and Lindsey crush Tommy (Owen Teague), and it isn't long before strange shit starts happening: Mary has a new imaginary friend and is drawing creepy pictures and smashes a glass in Lindsey's face (the only genuinely shocking moment); Tommy carves a symbol into his chest and attacks Dave; a ghostly figure pulls some INSIDIOUS jump scare moves on Sarah; and Mike loses it and tries to throw the family overboard. The entire film is told in flashback by Sarah to Jacksonville detective Clarkson (Jennifer Esposito), who's been brought in by the Coast Guard after Sarah and her daughters appeared to be the only survivors of a shipwreck. Clarkson quickly recommends a padded cell and a psych eval after listening to Sarah's story of a possessed boat and that "Evil needs a body to exist...the body was that boat." Written by Anthony Jaswinski (THE SHALLOWS) and directed by Michael Goi (who's helmed several episodes of AMERICAN HORROR STORY), MARY revels in every hackneyed horror cliche in the book, like Sarah conveniently finding a scrapbook of old-timey news clippings--that look like they were quickly generated on a production assistant's laptop that morning--detailing all the crews that set sail on the Mary going back to 1883 and were never seen again, and that the ghost haunting the ship is that of the drowned daughter of the very first Mary captain. Who left the scrapbook there for her? The ghost? That was awfully helpful of her. And how powerful is this malevolent spirit when Sarah can incapacitate it with a flare gun? The closing credits roll at 77 minutes after a twist ending you'll absolutely see coming, and the only mystery is why Oldman (and Mortimer, for that matter) is wasting his time with junk like this. The guy pretty much swept the Best Actor category throughout the 2018 awards season. I'd like to think he could parlay that into something more substantive than "Gary Oldman's MOON IN SCORPIO." (R, 84 mins)