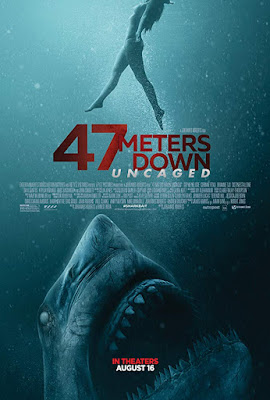 Rescued from straight-to-DVD oblivion just a week before hitting retailers in 2016 under the title IN THE DEEP and released in theaters a year later, 47 METERS DOWN proved to be a surprise summer 2017 hit for the upstart Entertainment Studios, who bought the film from a cash-strapped Dimension Films when the latter didn't see any potential in it. That was just before THE SHALLOWS ended up being a sleeper success in 2016, convincing Entertainment Studios CEO and veteran comedian Byron Allen that this cheap acquisition was a smart investment. He was right, but 47 METERS DOWN has been the only thing keeping Entertainment Studios afloat after a string of box-office duds, including the terrible German-made social media horror pickup FRIEND REQUEST, the ridiculous THE HURRICANE HEIST, and the godawful Keanu Reeves sci-fi thriller REPLICAS (HOSTILES and CHAPPAQUIDDICK got good reviews, but played to mostly empty theaters). 47 METERS DOWN was an accidental hit for the hapless Allen. Nobody needed a sequel but desperate times call for desperate measures. And for our sins, we've got 47 METERS DOWN: UNCAGED. 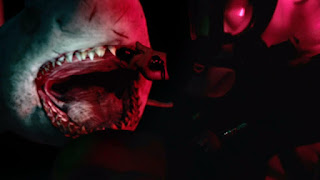 Director and co-writer Johannes Roberts returns, and to his credit, there's no idiotic twist ending like the one that completely ruined its predecessor and sent a palpable wave of resentment rippling across the theater. Roberts has yet to make an all-around front-to-back good movie, but he has his moments, as anyone who saw last year's THE STRANGERS: PREY AT NIGHT can attest. A largely by-the-numbers reboot/sequel to the 2008 hit, THE STRANGERS: PREY AT NIGHT is pretty forgettable except for a standout scene at a swimming pool that makes brilliant use of Bonnie Tyler's "Total Eclipse of the Heart." It's an instant classic sequence that's masterfully assembled and uses sight and sound so effectively that it's almost enough to trick you into thinking the movie is better than it is. Roberts tries that same technique again here, with a long tracking shot through a narrow underwater cave that uses Roxette's "The Look" before segueing into an eerie cover of the Carpenters' "We've Only Just Begun." It's not quite as effective as Bonnie Tyler, but this seems to be Roberts' schtick (Status Quo and Aztec Camera also make needle-drop appearances). No cast members from 47 METERS DOWN return, though there is a shot of a school named "Modine International School for Girls," likely included as a wink-and-a-nod to Matthew Modine, who got a free vacation to the Dominican Republic by taking a small role in the first film. 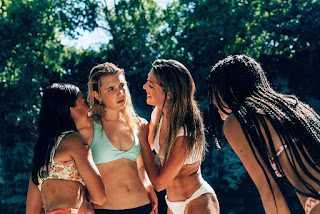 Set in a posh, scenic resort town in the Yucatan Peninsula, UNCAGED opens with teenage Mia (Sophie Nelisse) being bullied by some mean girls and getting no help from her stepsister Sasha (Corinne Foxx, Jamie's daughter). They've both been relocated after their parents--Mia's dad Grant (John Corbett) and Sasha's mom Jennifer (Nia Long)--have gotten married and marine archaeologist Grant has a long-term job opening up a long-hidden cave system housed in the ruins of an ancient Mayan city that's been underwater for centuries. Sasha talks Mia into bailing on a glass-bottom boat tour of the area to head to a secret cove with Sasha's besties Alexa (Brianne Tju) and Nicole (a debuting Sistine Stallone, Sly's daughter), where Grant and his two research assistants have conveniently left some diving equipment. They decide to just explore the first cave and head back up, but as soon as someone says "What's that?" and ventures off on their own, their fate is sealed. The girls are soon joined by a screaming fish (don't ask) and then by a blind, albino great white shark, part of an undiscovered species that's spent centuries evolving in total darkness...that is, until Grant opened up a cave and they got through. Sightless but with every other sense heightened, the shark is joined by others, repeatedly sneaking up on and cornering the girls into tight spots in caves and rock formations, and stirring up enough silt that they're pretty much as blind as the sharks when it comes to finding a way out. And their oxygen tanks are running low... 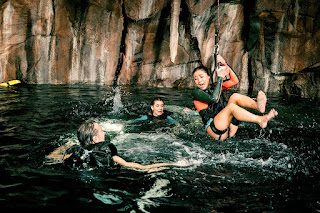 47 METERS DOWN: UNCAGED is a lesson in stupidity and poor decision-making, starting with no one thinking to use a guide line, but the rest is mostly on the part of Stallone's Nicole. She's the one who dismisses safe diving protocols, she's the one who sees something mysterious and swims toward it, she's the one who knocks over a large totem and stirs up all the silt, and she's the one whose selfishness and frantic impatience end up making the situation worse and leading to the deaths of two more people, so much so that her fate actually serves as a crowd-pleasing moment. The concept of the uncovered city and the cave system make for an appropriately creepy setting, but it eventually becomes impossible to tell what's going on, with one sequence such a dark blur that it's several minutes before you can even ascertain who just got killed. What this really is at the end of the day is a JAWS-inspired retread of Neil Marshall's THE DESCENT. The ghostly-white albino sharks probably sounded good on paper, but poor CGI renders them lacking in onscreen execution, and Roberts shows absolutely no shame in blatantly cribbing the most memorable scene in the 20-year-old DEEP BLUE SEA when a potential savior is taken out right in the middle of his inspirational speech. On the basis of it not having a completely, infuriatingly shitheaded twist ending, 47 METERS DOWN: UNCAGED might be an ever-so-slight improvement over its predecessor, but it's still the kind of disposable, streaming-ready B-movie that you won't even remember by the time you get to the parking lot. However, Roxette is still stuck in my head...