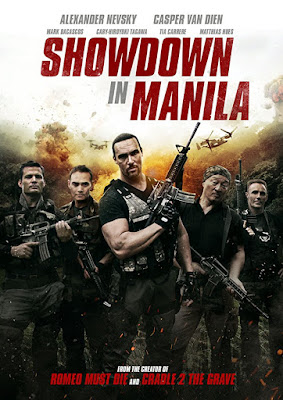 Even among those fringe-dwellers who scour the deep cuts of streaming services and deign to examine the merchandise near the bottom of the new release rack at Walmart, Alexander Nevsky remains an enigma. A well-known bodybuilder and media personality in his native Russia, with a towering 6' 6" frame and a passing resemblance to Dwayne Johnson, the 46-year-old Nevsky has been plugging away in DIY fashion for about a decade and a half, overseeing an empire of sorts and trying to establish his action star bona fides the best way he can: by cranking out one movie after another and being wealthy enough that the quality of the films and whether anyone actually likes them are non-factors. After a secondary role as a bad guy in the 2003 Russian-made Roy Scheider/Michael Pare thriller RED SERPENT, Nevsky wrote, produced, and starred in MOSCOW HEAT, which got a straight-to-DVD release in the US in 2005. MOSCOW HEAT set the Nevsky template: he has a genuine affection for cop/buddy movies of the 1980s and 1990s and tries to replicate that whole Joel Silver/Shane Black sort-of vibe. He has enough money that he can lure several past-their-prime big names or career C-listers: MOSCOW HEAT found Nevsky managing to fly Michael York, Joanna Pacula, Richard Tyson, Andrew Divoff, and Adrian Paul over for a Russian vacation. Future Nevsky productions featured recurring BFFs like Tyson, Divoff, and Paul, but also Sherilyn Fenn and David Carradine (2007's NATIONAL TREASURE ripoff TREASURE RAIDERS), Billy Zane, Robert Davi, Bai Ling, and Armand Assante (2010's MAGIC MAN), and Kristanna Loken and Matthias Hues (2014's BLACK ROSE, belatedly released in the US in 2017). For all intents and purposes, Nevsky is to Russian action movies what Uwe Boll was to German tax loopholes in the '00s.

Nevsky's latest film to hit the US is SHOWDOWN IN MANILA, which bombed in Russian theaters way back in 2016. It's partly an homage to the kind of jungle/explosion movies that Antonio Margheriti and Cirio H. Santiago made back in the '80s, crossbred with an '80s/'90s cop buddy movie, but lacking even the basic competence to be a remotely engaging on any level. Nevsky is Nick Peyton, the leader of VCU (Violent Crimes Unit) Strike Force, an elite unit targeting a human trafficking operation run by an international criminal known as "The Wraith" (Cary-Hiroyuki Tagawa). After a botched raid on The Wraith's Manila compound results in the death of his entire team, a devastated Peyton quits VCU in disgrace. Two years later, vacationing FBI agent Matthew Wells (Mark Dacascos, who also makes his directing debut) and his wife (Tia Carrere) run into The Wraith and his chief henchman Dorn (Hues) at a Manila resort, resulting in Wells' death and his wife's abduction and eventual escape. When the cops prove useless, Mrs. Wells hires Peyton, now in a private eye partnership with wisecracking, horndog buddy Charlie (Casper Van Dien). Eventually, Peyton and Charlie bring in the big guns to join them in an assault on The Wraith's base of operation: a quartet of badass mercenaries that includes '90s video store legends Don "The Dragon" Wilson (BLOODFIST), Cynthia Rothrock (CHINA O'BRIEN), and Olivier Gruner (NEMESIS) for what amounts to an EXPENDABLES knockoff that might as well be called THE AVAILABLES. 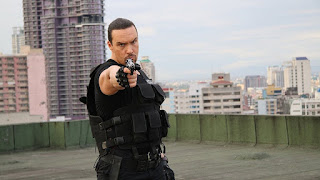 SHOWDOWN IN MANILA boasts the late Cirio H. Santiago's son and longtime assistant Christopher as a co-producer (also among the producers is Andrzej Bartkowiak, who's actually directed real action movies like ROMEO MUST DIE and EXIT WOUNDS), and back-in-the-day Filipino B-movie fixture Don Gordon Bell has a small role, showing that Nevsky's affection for these sorts of things is sincere (Vic Diaz would certainly be in this if he was still with us), but holy shit, comrade. Between his garbled accent, his wooden delivery, and possessing absolutely zero screen presence, Nevsky is pretty close to the worst actor you'll ever see. Checking his social media feed, Nevsky seems to be an all-around nice guy who loves action movies and numerous on-set photos look like everyone's having a blast, but Alexander Nevsky will never headline an action movie not produced and written by Alexander Nevsky. Van Dien tries to liven things up and seems to be having a genuinely good time (there is one big laugh early on when he turns up on surveillance video having sex with the wife of the cuckolded client who hired them to catch her cheating and tries to explain it away with "I thought the camera was off!"), but he's eventually relegated to the background. Dacascos directs with the same sense of style and mise-en-scene usually reserved for Russian dashcam videos, and he and Nevsky stage one haplessly inept action sequence after another. The CGI explosions are laughable and the fight choreography is so badly-handled that even veteran warhorses like Wilson, Rothrock, and Gruner look like inexperienced amateurs. It's hard telling where Nevsky gets the funding for these things--he's already got one more star-studded vanity project on the way with MAXIMUM IMPACT, whose cast includes Danny Trejo, Eric Roberts, William Baldwin, and Tom Arnold--but make no mistake: SHOWDOWN IN MANILA is the worst Russian production to come down the pike since the 2016 Presidential election. (Unrated, 90 mins) 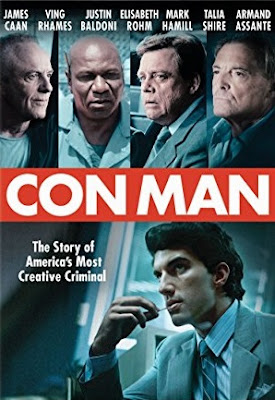 There won't be a 2018 film more egregiously disingenuous than CON MAN, a total bullshit biopic of Barry Minkow, a 1980s teenage business phenom whose entrepreneurial skills led him down the slippery slope of Ponzi schemes, securities fraud, insider trading, and other felonies that will keep him in prison until June 2019 at the earliest. As WOLF OF WALL STREET-ish as Minkow's story is, it's not nearly as interesting--or infuriating--as what happened during the making of this movie. If you see the plethora of down-on-their-luck stars getting the most dubious paycheck of their careers and think they look a little younger than they are, that's because CON MAN was filmed in 2009 and is only now being released. Not just because it's terrible, but because it was seized as evidence in a federal case involving Minkow embezzling millions from a church that hired him as a pastor upon his parole after he--wait for it--found God while in prison. Beginning in 1984, young Minkow (Justin Baldoni) works part-time at a gym and borrows money from a roid-raging loan shark (Bill Goldberg) to start ZZZZ Best, a carpet cleaning company that he runs out of his parents' garage. With his ingenuity for cooking the books, "check kiting," and creating fraudulent work orders to the tune of $400 million, ZZZZ Best is worth $100 million on paper by the time Minkow graduates from high school. His mom (Talia Shire) and dad (Mark Hamill) are concerned that he's in over his head, but Minkow is addicted to the rush, and at the urging of his construction magnate uncle (Michael Nouri), he partners with mobster Jack Saxon (Armand Assante), which catches the attention of dogged FBI agent Gamble (James Caan). Minkow's scheme eventually and inevitably collapses due to his hubris and, as his mom cries, "You don't have anything because you don't have God!" In 1988, at just 20 years of age, he's sentenced to 25 years in prison on 57 counts of fraud and ordered to pay restitution in excess of $26 million.

Here's where CON MAN, shot under the title MINKOW, gets interesting. Not in terms of the movie itself, which is a jumbled, badly-edited mess and all-around amateur hour, but in terms of what happened behind-the-scenes. Minkow found religion in prison--thanks to prison protector Peanut (Ving Rhames) but in part because of cellmate Michael Franzese, a mob boss and former B-movie distributor who became a Christian motivational speaker and is a real-life talking head in periodic documentary-style cutaways. Minkow financed much of CON MAN himself, and once he's sentenced to prison, there's a time jump to the early 2000s and a paroled Barry Minkow is now played by...Barry Minkow. In addition to working with the FBI on training agents in spotting financial fraud and being a semi-regular on cable news business shows, he becomes a pastor at a church and dedicates his life to helping others, including an elderly parishioner (Nicolas Coster) who thinks he's been scammed out of his retirement savings in a hedge fund overseen by a known Ponzi schemer (Gianni Russo). Minkow then steps in and risks everything to recover his parishioner's $250,000 retirement fund in one of the most ludicrously self-aggrandizing hero scenarios you'll ever see ("I'm doing the work of God! Protecting the weak!" he shouts at one point). It's ludicrous because it was revealed after the film was completed that Christian man of God Minkow was bilking his own congregation of money to get it funded while embezzling from the church and engaging in all sorts of insider trading and investment fraud. During production, according to a 2012 Fortune article, Minkow was even picked up on a hot mic between takes bragging to Caan about how he financed the movie by "clipping" companies. Minkow denied saying anything, even daring someone to produce the tape, forcing director/co-writer Bruce Caulk to do just that and turn the recording over as evidence. He said it. Because of course he did.

Minkow's arrest left the completed film (see original 2010 trailer above) in limbo, since it was intended to be an uplifting--occasionally veering into full-on faithsploitation--look at a criminal's redemption (complete with ridiculous sequences of Minkow, wearing a wire, chasing some bad guys through a hotel like he's an action hero and, in prison yard football game, throwing the game-winning touchdown) and its very existence was due to the crimes he committed to get it made. After the climactic sequence with Minkow looking like a savior by risking his life to save an old man's retirement savings, the film half-assedly addresses his fall from grace faster than THE ITCHY & SCRATCHY SHOW got rid of Poochie. I guess if you're a GODFATHER superfan, you can feel really depressed at seeing Caan, Shire, and Russo back together in the same movie (Caan and Russo do have a scene together near the end, and it would've been nice to see Sonny Corleone and Carlo Rizzi set aside their differences to collaborate on a merciless beatdown of Barry Minkow), but CON MAN is a con job itself, nothing more than Barry Minkow furiously jerking off to Barry Minkow fan fiction concocted by Barry Minkow himself. Fuck Barry Minkow. (Unrated, 100 mins)