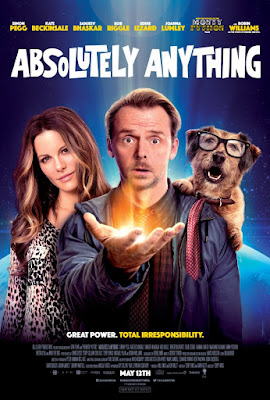 As far as unofficial entries in the Monty Python canon go, ABSOLUTELY ANYTHING is so bad that it makes YELLOWBEARD look like MONTY PYTHON AND THE HOLY GRAIL. The first film to unite the five surviving members of the legendary comedy troupe since 1983's MONTY PYTHON'S THE MEANING OF LIFE (John Cleese, Eric Idle, Michael Palin, Terry Gilliam, and Terry Jones; Graham Chapman died in 1989), ABSOLUTELY ANYTHING was directed and co-written by Jones, who had the script stashed away since the early '90s and it shows. Jones almost got it going around 2003 but decided to put it on the backburner after the release of the Jim Carrey hit BRUCE ALMIGHTY, which has an almost identical concept but Jones' script has a Douglas Adams/Terry Pratchett twist. Instead of being granted powers by God, ABSOLUTELY ANYTHING's everyman hero Neil's (Simon Pegg) are granted courtesy of a crew of aliens--whose instantly recognizable voices are provided by the Python guys--who have happened upon Earth in their galactic journey and are deciding whether it's a planet worth saving. Picked at random by lead alien Death Dealing Darkness Bringer (voiced by Cleese), Neil is used as a guinea pig to gauge what a normal human will do with unlimited power. With a flick of his hand, Neil is able to make sweeping changes that he often has to walk back due to lack of specification (for example, after he causes an alien attack at a school that kills 40 people, his command to "Bring back everyone who died," ends up creating a brief zombie apocalypse). He tries to use his new ability to make his downstairs neighbor Catherine (Kate Beckinsale) fall for him while avoiding her psycho ex (a grating Rob Riggle), turns his best friend (Sanjeev Bhaskar) into a sausage, and, of course, makes his dick bigger. He also gets his dog Dennis to talk with the voice of the late Robin Williams, which should give you an idea of how long this thing sat around waiting for a US distributor. Shot in early 2014, ABSOLUTELY ANYTHING was dumped into a handful of US theaters in May 2017 by the rinky-dink Atlas Distribution, a company whose only noteworthy--and I use the term "noteworthy" loosely--accomplishment was releasing all three ATLAS SHRUGGED movies. Pretty much every joke lands with a thud in this flat and almost completely laughless fiasco that's made even more depressing by the fact that it was Williams' last performance and the last comedy we'll get from Jones, who was diagnosed with dementia shortly after shooting wrapped, prompting his retirement from public life in 2016. (R, 85 mins) 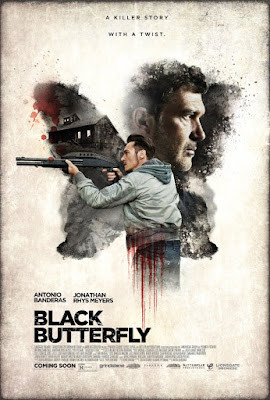 A remake of a 2008 French film with the same title, BLACK BUTTERFLY was set to roll in 2011 with Nicolas Cage starring and Rod Lurie (THE CONTENDER) producing, but the project fell apart during pre-production. Director Brian Goodman, an actor whose only previous credit behind the camera was the little-seen 2008 crime drama WHAT DOESN'T KILL YOU, remained attached, and by the time filming began, Cage was replaced by Antonio Banderas, and the film was now a Spanish co-production, shot in Italy with a mostly Italian crew (Mario Bava's grandson Roy Bava served as assistant director), and set in an isolated area of Colorado. Banderas is Paul, a washed-up novelist once anointed the Next Big Thing, but now in his fourth year of writer's block, drinking heavily, feeling sorry for himself after his wife left him, and holed up in a remote cabin failing to deliver an overdue film script that he hasn't even started writing. He's trying to sell his cabin out of financial necessity, and his real estate agent Laura (Piper Perabo) has yet to find any takers. After a road rage incident with a belligerent trucker continues at the local diner, Paul's ass is saved by Jack (Jonathan Rhys Meyers), a glowering drifter looking for a place to stay. Out of gratitude, Paul offers Jack his guest room for the night, but Jack decides to stick around, doing some much-needed handyman work around the cabin and showing an intense interest in getting Paul off the bottle and writing again. Jack's demeanor gets more threatening and controlling and Paul, and eventually Laura, find themselves being held captive by the deranged Jack, who Paul is now convinced is a serial killer responsible for a string of murders in the region that date back several years.

BLACK BUTTERFLY is merely dull and nonsensical for most of its duration, with all the talk about writing, plot, and characters threatening to spill over into a trite exercise in meta storytelling. It doesn't even do anything interesting with the unexpected casting of legendary cult director Abel Ferrara (KING OF NEW YORK, BAD LIEUTENANT) as the manager of the town's tiny carryout, and anyone else would've asked Paul to leave after the first night, but then there'd be no movie. A third act twist requires some significant suspension of disbelief but livens things up in a vaguely giallo-like way portended by the title (I was briefly reminded of AMUCK and Dario Argento's TENEBRE as things started to fall into place), putting things in a different perspective and making it appear that the film is well on its way to maybe not quite completely redeeming itself but at least finishing big in a way that makes it a reasonably entertaining time-killer. But then Goodman and writers Marc Frydman (Lurie's longtime producing partner) and Justin Stanley shit the bed by adding one last twist that represents arguably the hoariest of all thriller genre cliches, one so ancient and played out that it almost qualifies as some kind of sick practical joke that it's being used seriously in 2017. Really, guys? That's how you decided to wrap this up? It couldn't be any more infuriating if Goodman, Frydman, and Stanley appeared on camera and said "You just watched this for 90 minutes. Dumbass."  (R, 93 mins) 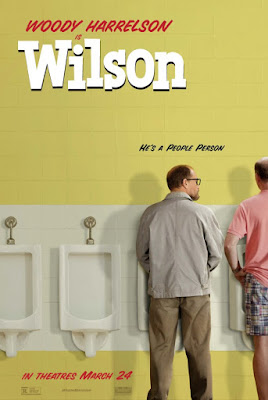 Adapted by Daniel Clowes from his 2010 graphic novel of the same name, WILSON doesn't continue the success of two previous big screen Clowes adaptations, 2001's GHOST WORLD and 2006's ART SCHOOL CONFIDENTIAL. Both directed by Zwigoff, GHOST WORLD and ART SCHOOL CONFIDENTIAL succeeded where WILSON fails. That's probably not the fault of WILSON director Craig Johnson (THE SKELETON TWINS), but rather from Clowes watering down his own source material and not having the right person in the lead. Woody Harrelson is one of our finest actors, but he's all wrong as Wilson, taking the kind of grumpy misanthrope that's similar to Steve Buscemi's Seymour in GHOST WORLD and the kind of character that was owned by Paul Giamatti a decade or so ago in AMERICAN SPLENDOR and SIDEWAYS, but playing it as an inconsistent mixture of Asperger's and unbalanced psycho.  A bitter curmudgeon whose only friend is his Miniature Schnauzer Pepper, Wilson is the kind of guy who rails against everything that's wrong in the world, smugly spouting off about all of the world's ills without provocation. He's the kind of guy who will sit down next to someone on an otherwise empty bus or invite himself to share a table with someone in an empty coffee shop and make pushy small talk. There will be five available urinals and he'll take the one right next to the one being used and strike up a conversation, of course excusing himself with "Nice cock, by the way." Wilson is supposed to be an fearless guy who doesn't play by society's norms and conventions but he's really just an abrasive, irredeemable prick, and when Harrelson plays him cackling and with wild eyes, you realize how much this needs a Buscemi or a Giamatti, or maybe even a Kevin Spacey to really convey the tone of Clowes' work. You'll want to get away from this movie the same way everyone else tries to back away from Wilson.

Even if having Harrelson play it this way was the intent, the film just never catches fire, lurching lugubriously from one DOA set piece to the next as almost every joke gets chirping crickets in response. WILSON feels like a film made by people who don't understand the material, which is inexplicable considering Clowes wrote the script himself (or, at least, he's the only credited writer). Tired of his angry routine, Wilson searches for a new purpose in his life after his father dies. He seeks out his ex-wife Pippi (Laura Dern) who left him 18 years earlier, aborting their child and getting involved with drugs and prostitution. She's cleaned up her act and turned her life around, and she reveals to Wilson that she actually had the baby and put it up for adoption. Ecstatic about being a father, Wilson finds the girl, Claire (Isabella Amara), an overweight, 17-year-old outcast, and he and Pippi try to establish a relationship with her. What follows is one improbable plot development after another, including an ill-fated trip to visit Pippi's bitchy sister Polly (Cheryl Hines), and Wilson being arrested on kidnapping charges. Sequences just seem to exist in a vacuum in WILSON--there's little forward momentum, either comedic or dramatic, and no one seems to exist in the real world. Clowes really nailed the psychology of his characters in GHOST WORLD, one of the best films of its decade, but this just feels like watered-down GHOST WORLD outtakes, right down to the very Enid-like Claire. There's one legitimately funny scene where Wilson intentionally rear-ends a woman's car just so he can ask her out on a date, and instead attracts a large crowd of witnesses, and Judy Greer is as charming as ever as a dog-sitter who somehow finds something worthwhile about Wilson, but in the end, it just goes nowhere and says nothing, and never gets around the obstacle of a great actor being badly miscast. Fox apparently knew they had a dud on their hands, releasing this on just 300 screens for a total gross of $650,000. (R, 94 mins)