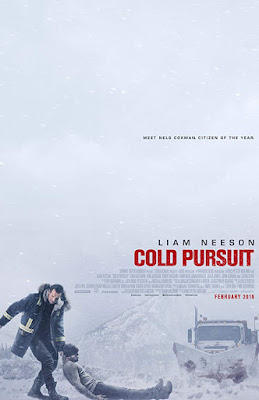 An almost scene-for-scene English-language remake of the 2014 Norwegian film IN ORDER OF DISAPPEARANCE by the same director (Hans Petter Moland, who also helmed DEPARTMENT Q: A CONSPIRACY OF FAITH), COLD PURSUIT is perfectly-tailored for the now-decade-long "revenge thriller" phase of Liam Neeson's career (the actor has said this might be his last film of this type). Its opening hijacked by the fallout of an honest but ill-advised Neeson revelation on the press junket--and really, who better to judge a reactionary, knee-jerk response to a violent incident involving a close friend from over 40 years ago by a young man who came of age in the late 1960s and early 1970s during the sociopolitical upheaval of The Troubles in Northern Ireland than uber-woke and perpetually-offended Vulture and AV Club contributors in their mid-twenties who may not even be aware of Neeson's career before TAKEN?--COLD PURSUIT would, at first glance, appear to be the now-customary winter Neeson revenge offering. But if you've seen IN ORDER OF DISAPPEARANCE or are at least familiar with its black comedy elements, it's something else entirely. Thanks to the genre expectations that come from Neeson rather than the original film's Stellan Skarsgard, COLD PURSUIT is an irreverent, witty, and frequently laugh-out-loud absurdist revenge thriller that feels like an in-his-prime Charles Bronson starring in a Coen Bros. movie. It works at its own pace and on its own wavelength, and everything about it just feels wonderfully offbeat and a bit off-kilter. It's a risky gamble for those expecting another TAKEN and it won't appeal to everyone, but once you're in sync with its oddball stylings and rhythms--it takes some time before it's clear that you're supposed to be laughing at most of this--it's an inspired blast filled with clever callbacks to earlier incidents and numerous visual gags, and it's vividly brought to life by Neeson and a terrific ensemble cast. 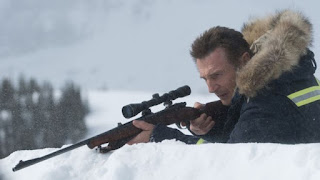 In the remote Colorado skiing town of Kehoe, local snowplow driver and man-of-few-words Nels Coxman (Neeson) barely has time to celebrate being named Kehoe's Citizen of the Year for his tireless efforts at keeping the main road clear before he and his wife Grace (Laura Dern) are dealt a tragic blow: their only son Kyle (Michael Richardson, Neeson's eldest son with late wife Natasha Richardson), a baggage handler at the local airport, is found dead from a heroin overdose. Insisting his son wasn't a junkie and that there must be some explanation for his death, Coxman embarks on what's initially the usual Neeson path of vengeance but one that's quickly defined by numerous unpredictable twists and turns. He offs a couple of low-level guys who turn out to be flunkies of Denver-based drug lord Trevor Calcote, aka "Viking" (Tom Bateman). When three of his guys turn up missing (Coxman has wrapped them in chicken wire and tossed them off a gorge into the ice-cold rapids on the outskirts of Kehoe), Viking is certain it's the beginning of a turf war with White Bull (Tom Jackson, presumably because Wes Studi and Graham Greene were busy), a Native American crime boss based in Kehoe who clashed with Viking's late father decades earlier (the cultural aspects and the oft-mentioned legality of weed in Colorado are the major structural diversions from the Norwegian original). At this point unaware of Coxman, Viking has White Bull's adult, first-born son killed and strung up on a road sign outside Kehoe, an unprovoked attack that breaks decades of peace and leads to White Bull planning the retaliatory kidnapping of Viking's classical music-loving young son Ryan (Nicholas Holmes), much to the chagrin of Viking's soon-to-be-ex-wife Aya (Julia Jones). All the while, Coxman keeps upping the body count, whacking guys with names like "Speedo" and "Limbo," and even getting advice from his retired and estranged criminal brother Brock, aka "Wingman" (William Forsythe), who recommends hiring a hit man known as "The Eskimo" (Arnold Pinnock). 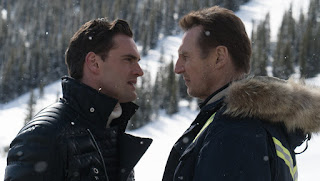 Coxman's killing spree mines humor from its over-the-top violence (and, yes, also his name--Skarsgard plays "Nels Dickman" in the original film), with the laughs often coming in the repetition, whether it's the soon-to-be-customary chicken-wire-wrapped corpse being thrown off the gorge ("Why chicken wire?" Brock asks his brother. "So the fish can eat enough of the body to keep it from bloating with gas and rising to the surface...I read it in a crime novel") to the names of the deceased being displayed onscreen in order of disappearance, to the point where we don't even see them being killed (maybe just a curtain being drawn or a polite request to step off an expensive rug), but the inevitability is such that it becomes a clever running gag. Other delightfully dark-humored bits range from Viking telling his bullied son to read Lord of the Flies to learn how to handle himself; local cops Gip (John Doman) and Dash (Emmy Rossum) having conflicting views on how to deal with the expanding turf war; sex-crazed Viking goon Bone (Gus Halper) endlessly crowing about the "31% success rate" of his $20 trick with motel cleaning ladies, which of course results in a great sight gag later on; young Ryan helping his father's chief henchman Mustang (Domenick Lombardozzi) with his hapless fantasy football team and pointing out that he's losing because he's starting four Cleveland Browns; and some of White Bull's crew threatening a hotel desk clerk with a bad Yelp review. Neeson is the nominal star, but he's more than willing to let almost every member of the large supporting cast get a memorable turn in the spotlight. Nels Coxman doesn't seem like he'd be a man especially adept at violence, but a throwaway line about his and Brock's father being a criminal is enough to justify his ability to navigate through this world, even though he seems to have distanced himself from it when he met Grace (the film's biggest flaw is that it gives Dern almost nothing to do). COLD PURSUIT handles its laughs without crossing the line into parody, which would've been the easy route to take for a standard-issue remake. Thankfully, this takes a more droll, tongue-in-cheek approach. Indeed, the audience seemed hesitant to laugh along at first, like they weren't sure what to make of it, but once it gets rolling and establishes itself, COLD PURSUIT won them over. Now if only people could forgive Neeson for some irrational, impulsive thoughts borne of misdirected rage that he quickly abandoned after coming to his senses decades ago.
Posted by Mark at 7:34 PM